This is Romero Games

A bootlegger could not hope for a better location or a better crew of people.

Romero Games is located in Galway, Ireland, an incredibly picturesque medieval city on the world-famous Wild Atlantic Way. It’s the 2020 European Capital of Culture and regularly cited as one of the friendliest places in the world. What’s lesser known is that Galway is also crawling with creative people who keep alive its buzzing art scene. This includes hundreds of programmers, artists and designers who work in Galway’s many tech companies, including Romero Games. In fact, as I write this, the Galway International Arts Festival is happening.

We are often asked, “Why Galway? Why Ireland?” In 2014, I was the recipient of a Fulbright award to study Ireland’s game industry, its educational institutions and its government policies. John and I drove all over Ireland meeting with people for nearly three months, from Cork to Donegal, from Dublin to Galway. When the time was up, I wrote the report and submitted it. While the report’s goal wasn’t to convince us to move, it was definitely one of its side effects! Technology makes it possible to be anywhere, and Ireland is where we wanted to be. So, in 2015, Romero Games was established in Ireland, and the rest is (recent) history. 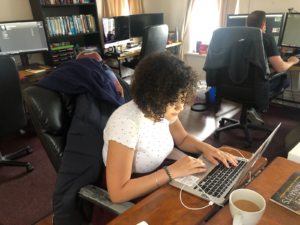 Though the arrival in Ireland is relatively recent, Brenda and John have a long history in games, dating back to the early 1980’s. Brenda has been fortunate to work on both the Wizardry and Jagged Alliance series, among others, while John is certainly best known for his work on Wolfenstein 3D, DOOM and Quake (it’s a surprise to many to find out that Wolfenstein 3D was actually John’s 87th game). In setting up shop, Romero Games looked for game developers with a similar life-long passion for games, people who could see the vision for Empire of Sin, and wanted to be a part of making it a reality.

In building a team, we focused on experience, mentorship and continued diversity of thought, and we continue to actively pursue these ideals. This means that our team is a mix of veterans with 20-30 years of experience, mid-level crew with 5-10 years experience, and exceptional juniors. As a team, we have experience on everything from Far Cry to Havok to Magic: The Gathering, Hearthstone and Dishonored. We genuinely believe that we have one of the most talented game development teams in Europe, and we diligently protect our culture of creativity. 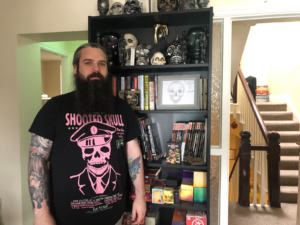 You already know about me and John. At the exec level of super nerds, we are joined by our Chief Technical Officer Keith O’Conor who brings over a decade of experience as a lead and graphics coder at both Ubisoft and Radical. On Empire of Sin, we are incredibly fortunate to have Ronan Pearce as the lead programmer and Denman Rooke as lead artist. In addition to the leads, we work with an incredible team of people whose creative work has shaped Empire of Sin into the award-winning game we introduced at E3. Please check out our team bio page to learn more about the team. Hopefully, you’ll get a chance to meet some of our team personally at PDX Con, on Twitch or at other game industry events. They’ll also be helping out with these dev diaries in the months to come.

As gamers, I am sure you know a lot about game developers. In closing this piece, I thought I might share a few things about Romero Games that we’re proud of.

We’re grateful to be making this Empire of Sin, and we appreciate you following along on our journey.