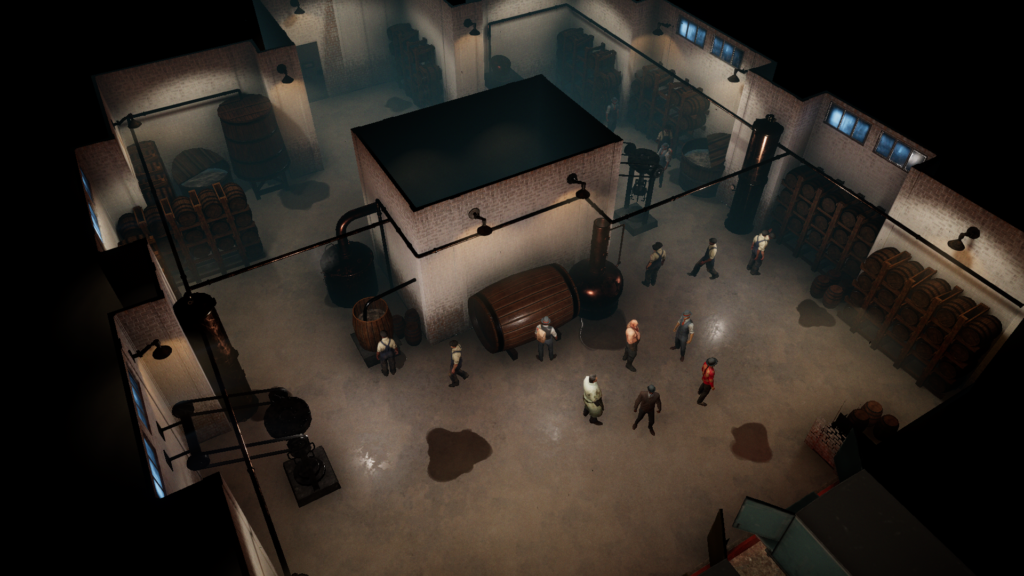 Empire of Sin casts you in the role of a gangster in Chicago during the era of prohibition. It may not come as a surprise to you to discover that the basis of the economic system is about the illegal production and sale of alcohol. This is done via rackets.

There are four basic types of rackets in the game. Each Racket fills its own niche inside the economic system, and you can go for a balanced approach or focus on a single racket type. 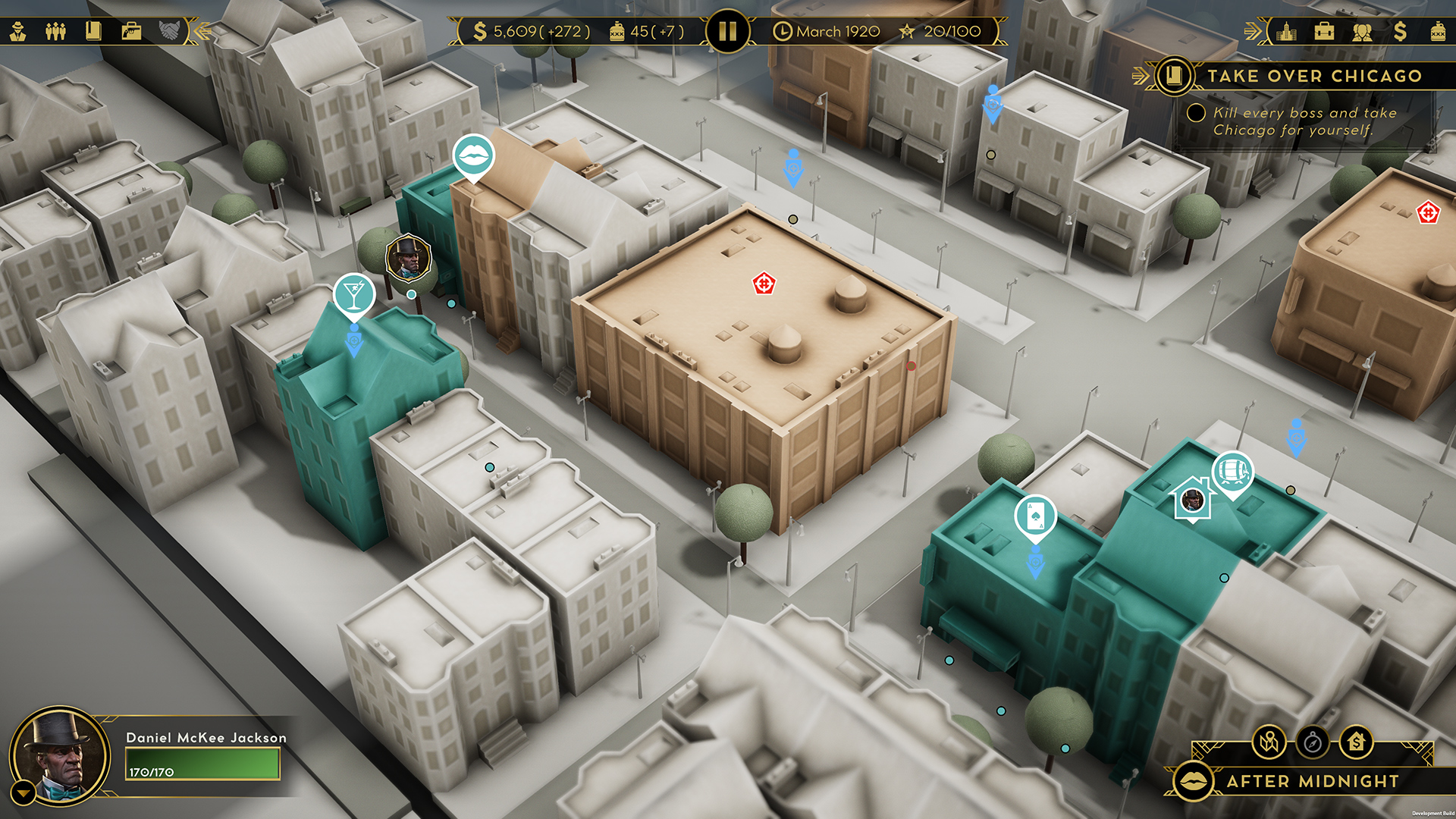 As the name implies, Breweries are the source of your illicit alcohol. Although styled as a Brewery, the building also covers the production of spirits through illicit stills and wine by ignoring the clear warnings displayed on grape juice concentrate by the socially responsible grape producers of America. These buildings produce alcohol every week and cost money. Essentially, breweries are dead weight and lose you money unless you can find an outlet for all this alcohol you are producing.

The name implies that this racket is not in the primary business of selling alcohol. However, as part of the overall customer experience, alcohol will be served if you have any available. The supply of alcohol will simply allow the Brothel to make more money from its alcohol sales. These buildings provide a nice solid foundation to any criminal empire. If the so-called law enforcement starts targeting your Breweries, your Brothels will continue to supply that cash flow that will keep your empire going.

Speakeasies are the classic prohibition racket that serve alcohol and make a healthy profit doing so. Unlike the brothel, it will not make any money unless it is supplied with alcohol, thus this racket is vulnerable to disruptions in alcohol supply.

Make their money from gambling. Unlike the other racket types, their revenue is not stable and will fluctuate according to just how much lady luck smiles on people. A casino can also lose money if the house has a bad night. Supplying alcohol increases the sizes of the bets, meaning the Casino will earn more or lose more depending on the roll of the dice. In the long run, Casinos will make money and be nice earners for your criminal empire. On a week-to-week basis, they are unreliable, so you will want some buffer in your finances if you are going to rely on casinos for your revenue.

Setting up a Racket

There are three ways to set up a racket. 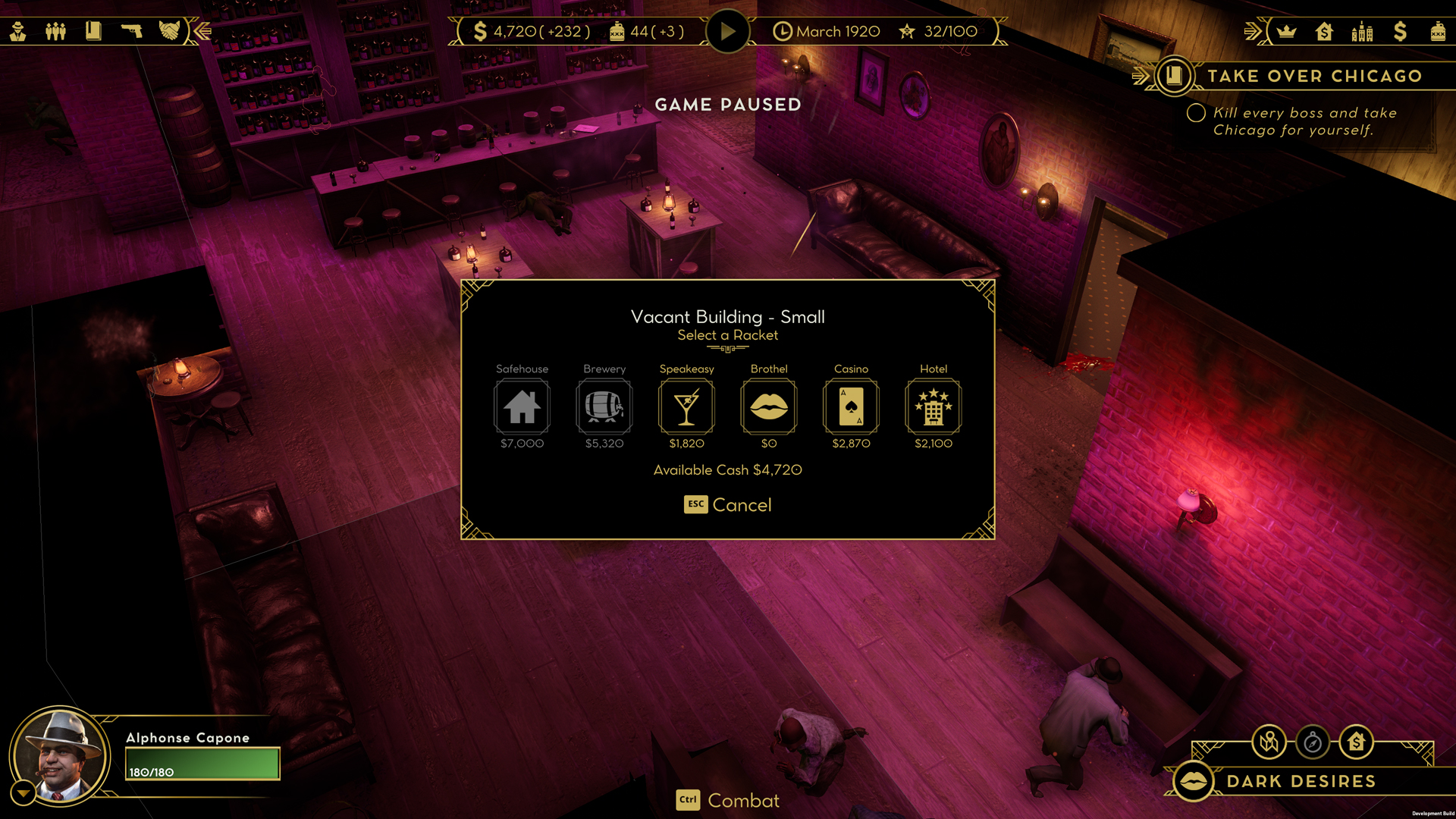 There are other options to damage, loot and shutdown rackets. I will leave someone else to describe these fun little extras for you. However, I just want to let you know they are there to answer the question, “But what happens if I beat up some thugs and don’t have enough money to convert it into a racket?”

To make money, rackets need paying customers. Each neighbourhood in Chicago has a customer pool, and if there are more spaces in rackets than there are paying customers available, then rackets will start competing for customers based on a value called Draw. Draw is simply an expression of how much people are willing to go to a place. It is a number, and when it comes to using it, we compare the draw of the racket to the average draw in the neighbourhood. Essentially, your speakeasy can be a rundown dive, but that is fine as long as everyone else’s rackets are even more rundown than yours.

Chicago is a small place (in the grand scheme of things), so customers will move from neighbourhood to neighbourhood in search of entertainment. Once they find a neighbourhood that will supply them, they will stay there until events transpire that will cause people to move on. As a player, you have a couple of tools at your disposal to help persuade people to go to your rackets in your neighbourhoods rather than other gangs. One option is when you win the battle, you can simply shut down the enemy racket. This will force the customers to look elsewhere for some entertainment. This also leads onto another value that is important, neighbourhood prosperity.

Prosperity in game terms is people’s willingness to go out and spend money in a neighbourhood. As this is the roaring twenties, Prosperity intrinsicity rises every month. Spending money on improving rackets increases Prosperity. On the other hand, the body count, the amount of people getting killed in a neighbourhood (and especially police), pushes it down. Prosperity modifies the maximum number of customers for each racket in the neighbourhood which effectively influences how much money the rackets make. There are other routes to influence how much money rackets make, for example we could have simply altered how much money people were willing to spend in rackets. However, the way we chose has a neat additional effect, customers will naturally move from low prosperity to high prosperity neighbourhoods and stay there. This has two additional consequences: long wars will inflict long-term harm on businesses in the neighbourhoods where the war is being fought. It gives you an incentive to exit a war if it is being fought in territory which you want to keep and also gives an additional way to attack the enemy. You do not need to take the racket. Just drive the customers away and inflict long term damage to the opponents. 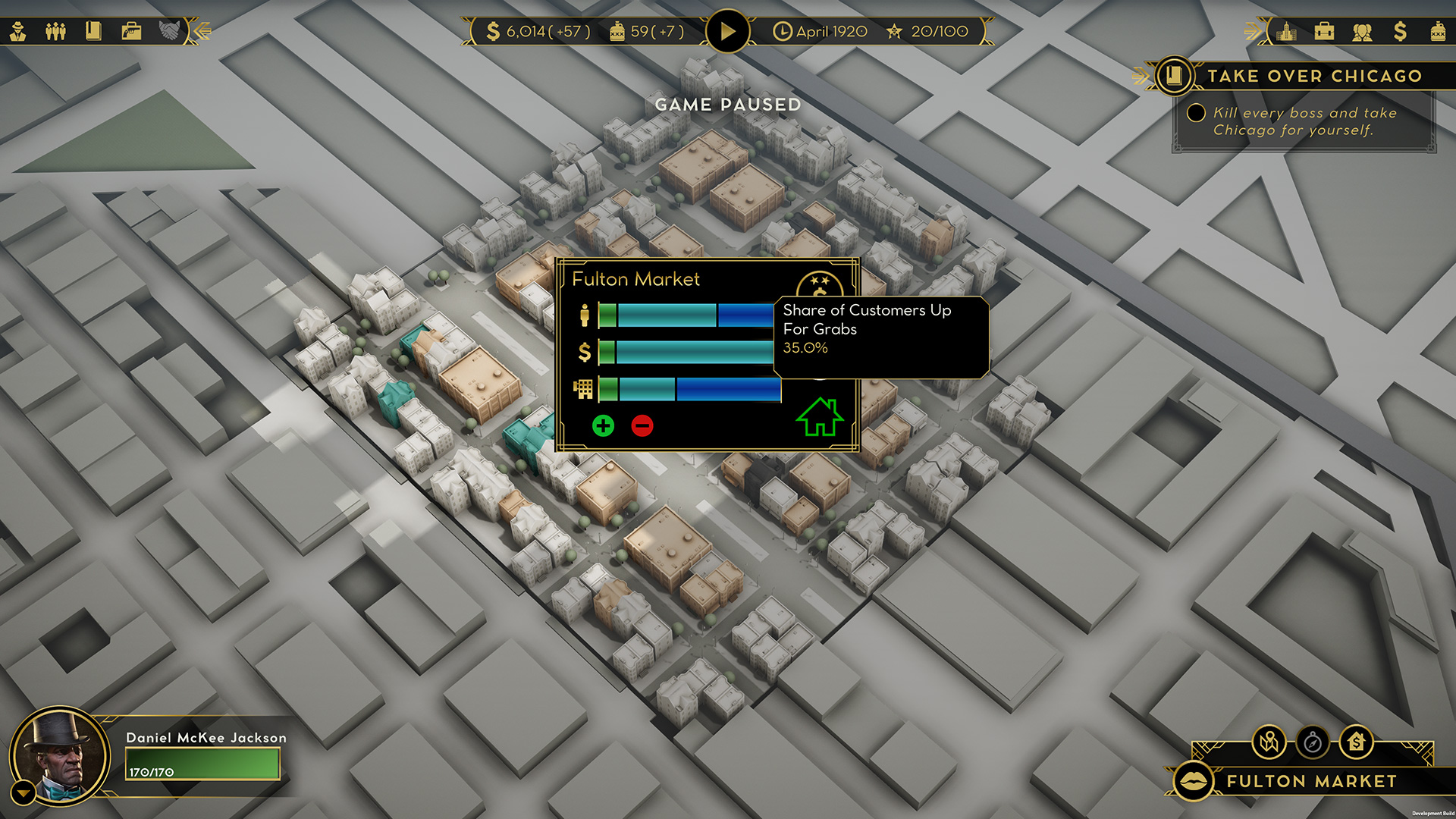 Rackets have a value called average spend, which is effectively how much money each customer is spending in the racket. The revenue per racket is the number of customers multiplied by the average spend. To facilitate the “build tall” strategy we give you the player a number of tools with which to improve this average spend value.

The first to upgrade the ambience of your rackets. Fix up the joint and people will open up their wallets. There is also a side benefit that if your racket is near one of the same type your ambience will also influence the draw of the racket. Again this is a relative thing, as long as your ambience is better than the nearby rackets you will get a draw bonus and vice versa. 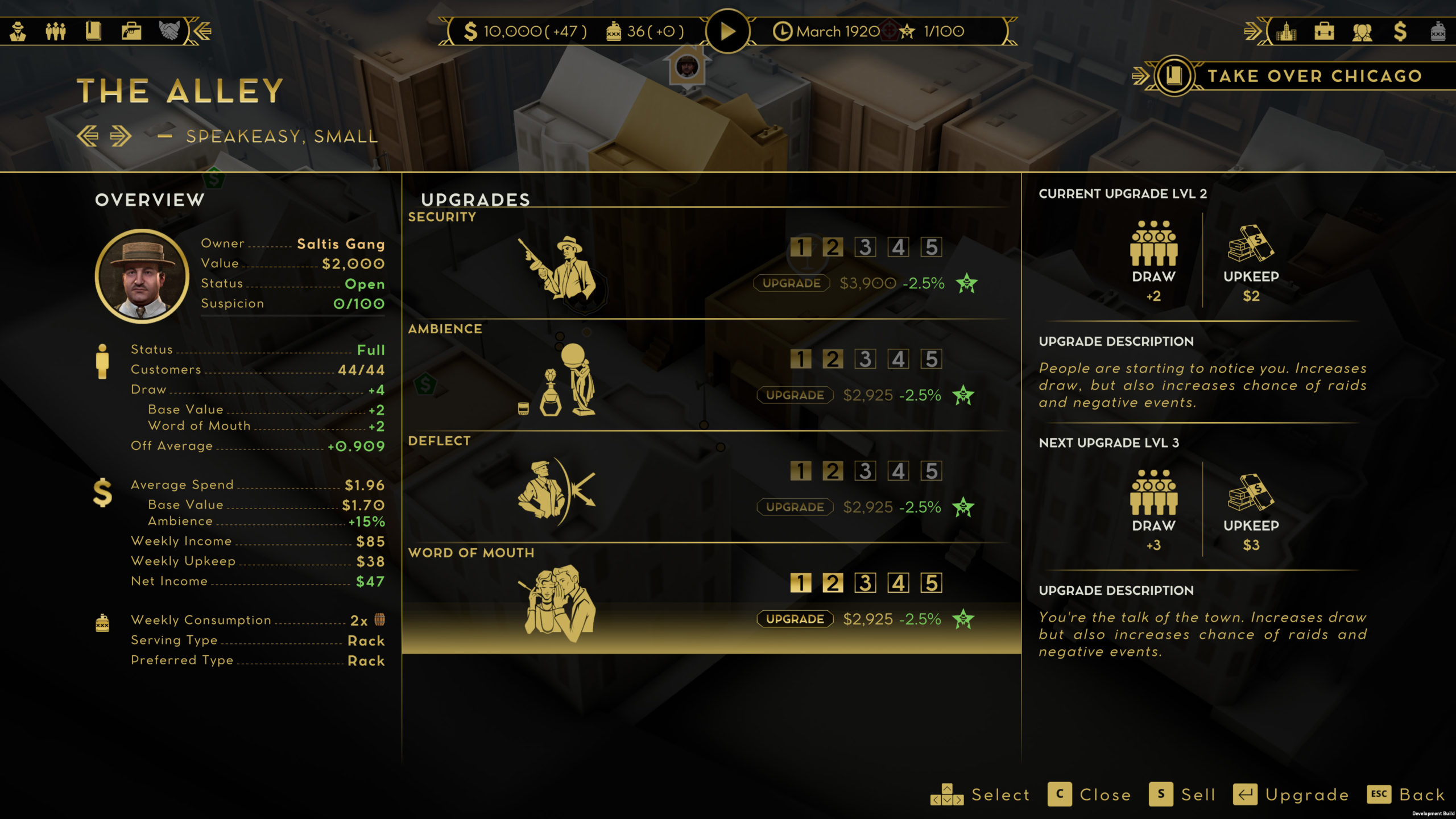 Then there is the straight forward supply of alcohol, your customers consume alcohol and supplying them with alcohol will ensure they keep spending. We touched on this in racket descriptions. What I will add here, however, is there is a maximum amount the customers will consume. Also, customers will stay in rackets even if there is no alcohol supplied. You can have speakeasies full of people desperate to spend money on alcohol who will wait months for the chance to do so. While this is unrealistic in the real world (unless the doors are locked from the outside), it’s not in Empire of Sin! More importantly, it does make it much easier to tell you things like how much alcohol you need on a weekly basis to run your empire. This in turn makes it easier for you, and the AI, to make strategic decisions on things like alcohol supply.

There are two alcohol supply strategies available to the player. The simple one is to aim to get the highest grade of alcohol possible, this will increase the income from your rackets and boost the profitability of your empire. The true min-max player, though, will seek to get just the right alcohol to each neighbourhood. It is more work, but I know some of you will have hours of fun perfecting the strategies to do it.

So your primary source of alcohol in the game are your breweries. Each brewery will produce a certain amount of alcohol. The alcohol is then available to the rackets for sale. (The moving of alcohol between a brewery and a racket is one of those things that looks so simple at first glance but as you dig into it gets more and more complicated. It is also something that is fairly simple at the start of the game where you may only have one or two breweries and most, if not all, of your rackets are in the same neighbourhood. Once your empire starts to expand and alcohol needs to be shuffled between multiple breweries across several neighbourhoods or from storage, it becomes a really quite complex problem. As a development team we chose to leave this problem alone and focus our time on things we felt would give more to the game.)

Each Brewery can only produce one grade of alcohol at a time. We wanted to make the alcohol optimization game challenging — you don’t just need enough production; you also need different sites to produce all the grades you want. 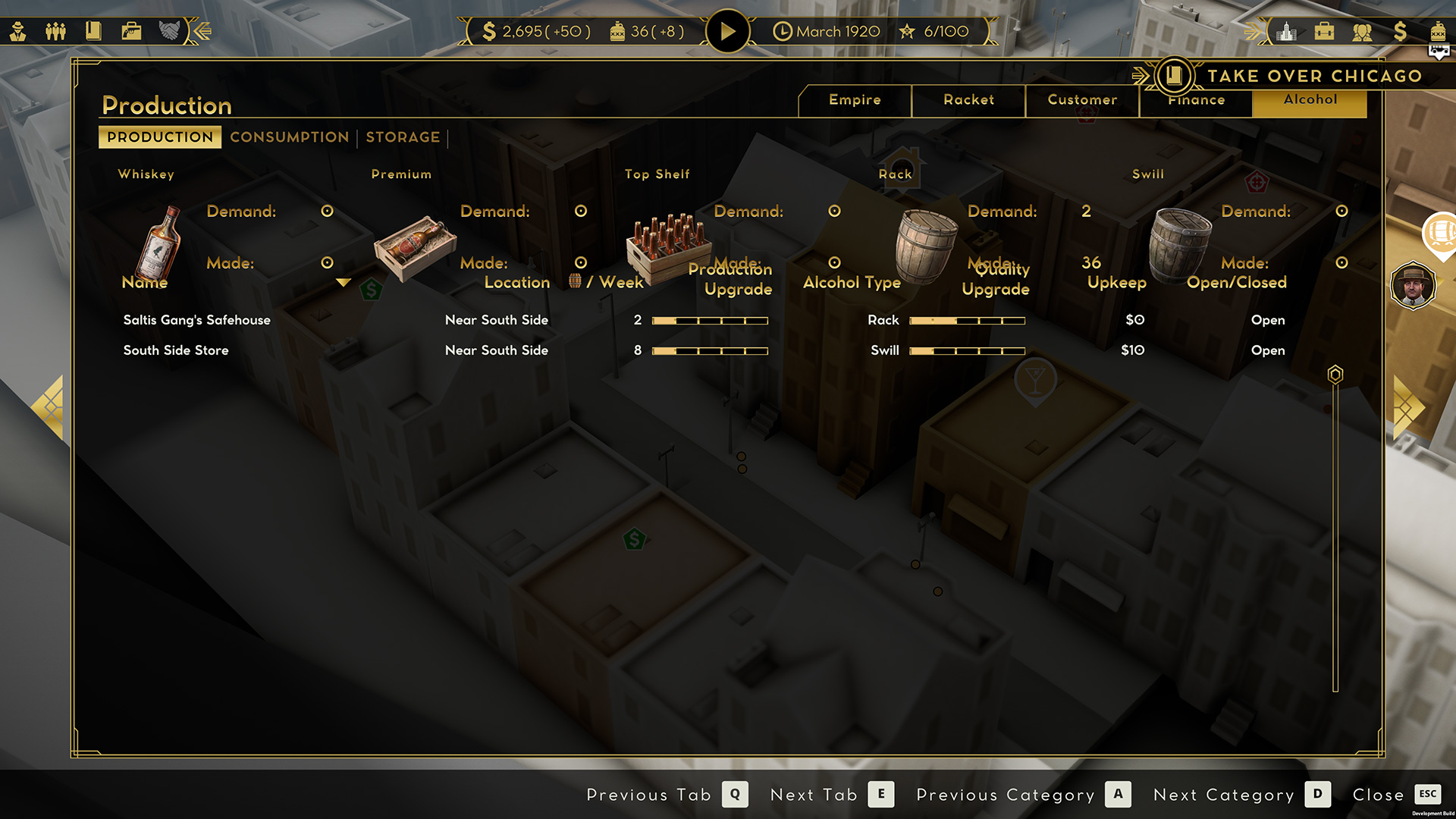 Breweries cannot just produce any type of alcohol they want, they start being only able to produce the lowest grade of alcohol.You need to upgrade the breweries to unlock the higher grades of alcohol.

When it comes to deciding what sort of alcohol you want to supply you choose a preferred grade for that neighbourhood it will then seek to supply that grade. The rules for what happens when you don’t have the required stuff are complex and evolving so I will leave out for the moment, just take my word that they exist.

In order to make the choice of racket you set up a little more interesting, we added the idea of a synergy. Essentially, rackets in the same neighbourhood act in combination to boost the average spend in these rackets. At time of typing, these synergies were built around poker hands. For example 2 pairs or a full house. The more complex the synergy, the more the average spend gets increased.

To further boost your synergies, you can open a hotel in the neighbourhood. This is an entirely legitimate business and won’t make you any money but the friendly staff are always there to help guests who are seeking some entertainment. So, if some lonely businessperson was in town for a few nights and wanted to go some place for some… well, you get the idea. The hotel staff will be able to direct them to the right place, i.e. one owned by you. What hotels do is magnify the bonuses of your current synergies, and are limited to one per neighbourhood per faction. Hotels cannot be upgraded or attacked in the way your less-than-legitimate businesses can be, but should you no longer have a synergy in the neighbourhood, it will simply close. 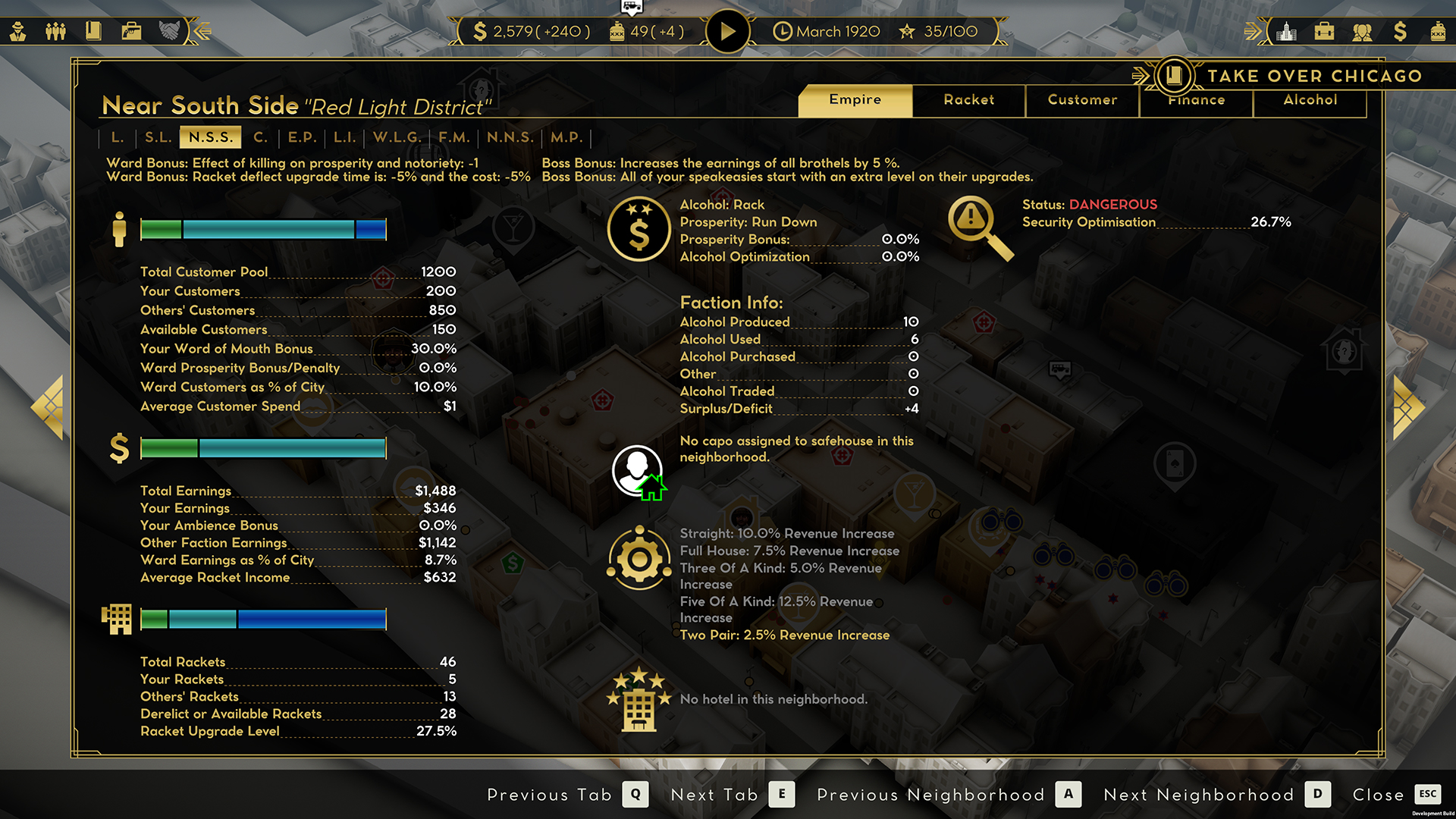 Each boss has two bonuses that pertain to rackets. I am going to level with you here: we aimed to make them fun and interesting rather than punch them into a spreadsheet and try to balance them to the third decimal place. The other thing is that bonuses are designed to be very different to each other. So, you may find that some bosses are simply overpowered when combined with your play style. If so, we hope you enjoy it (as these may be nerfed later). These bonuses have a bearing on the economics of each gang, so are worth looking at when considering your economic decisions.

Each neighbourhood also has a number of effects that will impact on rackets. Some of these are fixed and are innate to the neighbourhood, but others can be earned during the game. For example, once you get enough Brothels in a neighbourhood, you can earn the title “Red Light District” and then all Brothels earn extra money. If some brothels in that neighbourhood were to suffer some unfortunate accidents that caused them to close, then the neighborhood would lose the title and another neighbourhood could pick it up.

Well, that’s it for the economy round up. I hope this gives you some insight into some of the fun choices you will have!