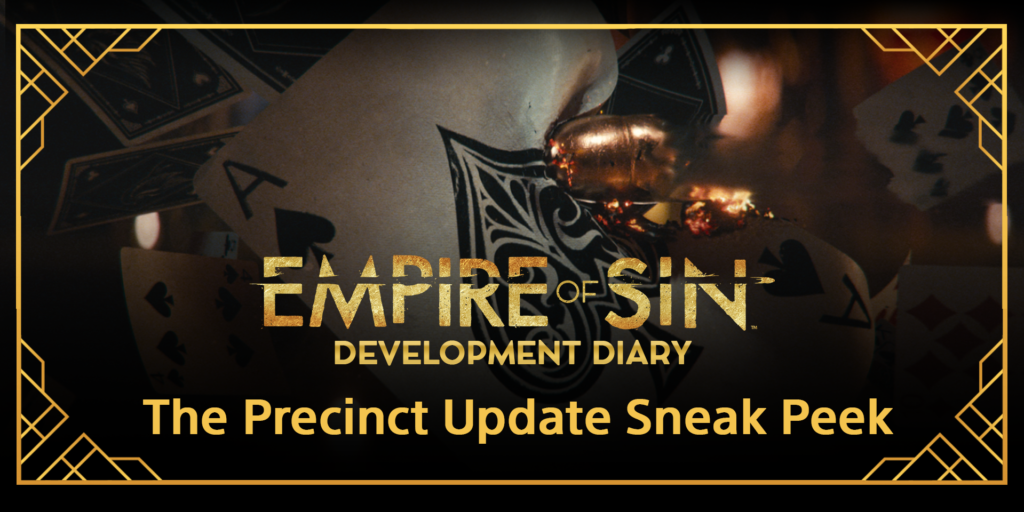 We’ve got something you might wanna see. One of our moles has been working double-time and has some exclusive information that few people have laid eyes on. It was just too good to keep quiet, so we had to pass it along. You didn’t hear it from us, but here are some things you can expect to see in The Precinct update!

Bosses are planning to get a lot more territorial within their neighborhoods. It’s no longer a case of setting up shop wherever you damn well please. Borders of blood have been drawn and those willing to cross them better come equipped because neighborhoods aren’t what they used to be. In The Precinct, each neighborhood will be split into smaller precincts that are controlled by you and other major factions. Some precincts will be held by thugs, much in the same way some rackets are now. Take the depot and clear the thugs, and the precinct is yours. 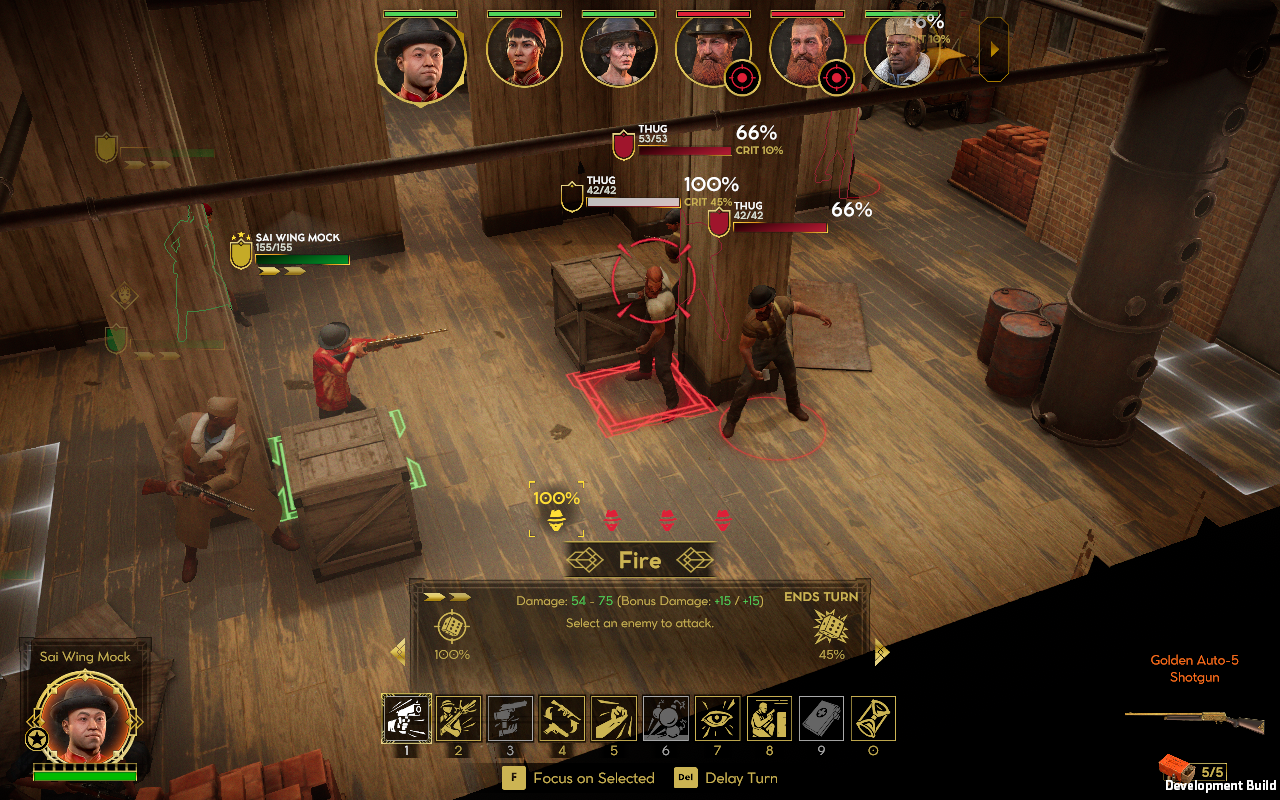 Like the bosses that run them, precincts can be friendly, neutral, or hostile. You are free to move about precincts, but if you like the look of one and want it for yourself, you must declare war on the faction who owns it. When it comes to faction relations and precincts, it’s all duck or no dinner, so choose your battles wisely.

Each precinct has set boundaries, so they stay the same every game. When you own a precinct, it’s painted in your boss’s colors to let everyone know who’s running the show in that part of town. Precincts have rackets as they do now, but ownership of them flips entirely to whomever owns the precinct depot. 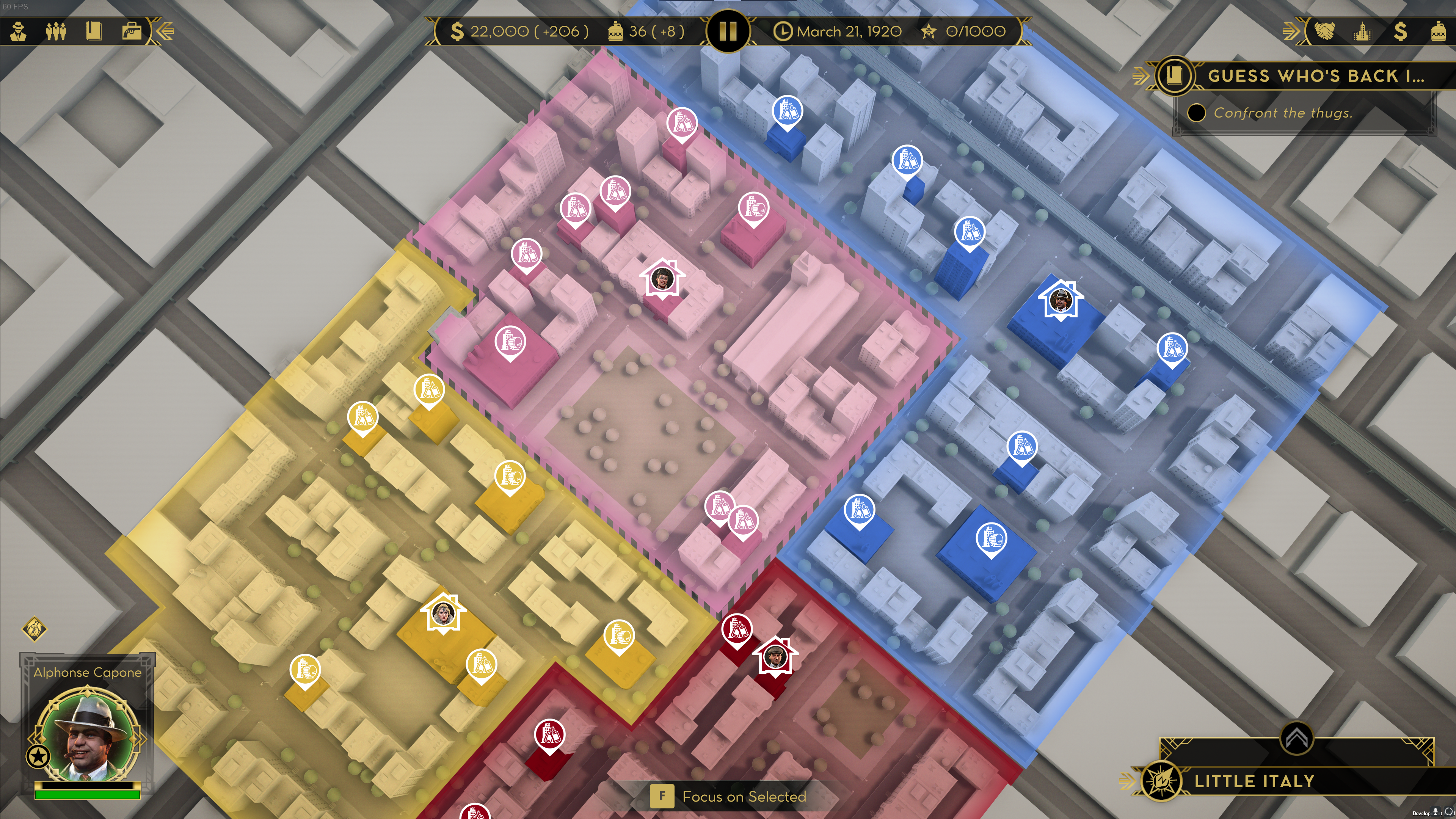 Major factions still have their Safehouse within a neighborhood and as always, this is where you fight the enemy boss. Take them out and the war is over.

Not only that but after hearing feedback from you, our dedicated Sinners, we are happy to say that you will no longer automatically acquire rackets when you take out an enemy boss. Their remaining precincts and rackets crumble and fall under thug control.

Beyond marking your territory lines and painting the neighborhood in your colors, precincts serve another very important purpose. They set you up with supply lines, which if not managed strategically, can have adverse effects that ripple throughout your empire. Adjoin two or more of your precincts and you set up a supply line. This provides all the rackets in your precincts with booze, while also ensuring your money has a safe path to get back to you. No supply line between your precincts and your rackets are in trouble, and in prohibition Chicago, that’s not something you want to happen for too long.

Supply lines must form an unbroken line of contact back to your Safehouse for them to work, so you’ll have to think carefully about which precincts deserve your attention, and which ones are worth starting wars over. Of course, you can play this to your advantage too. There’s nothing to stop you from claiming a precinct between two of another boss’s to break their supply line. This is still Empire of Sin we’re talking about. If you see an advantage for yourself, take it.

With all this radical change coming to Chicago, you’re going to need somewhere to get acquainted with your new precinct layout. Thankfully, you’ll have to look no further than your precinct screen. Things have been streamlined!

Everything you need to know about your precincts is gathered in one place: precinct name, the number of rackets, their type, police presence, and all your financial information. You can also do all your upgrades in one place; there’s no need to individually upgrade every racket in a precinct.

What’s more, you’ll notice there are improvement slots. Every precinct has improvement slots for virtual buildings that enhance certain aspects of your empire. Improvements work a bit like hotels do now and will always better the state of the precinct they are in, though they don’t come easy. Many improvements are gated by rackets, neighborhoods, or factions, so you will have to put in some work to reap the benefits.

Another thing to remember is that there are more improvements available than there are slots. So, you’ll have to carefully consider how you improve parts of your empire.

You may be wondering how George MacDonough and his law enforcers are reacting to the news of precincts. Well, there are many factors that influence how active police are in a precinct. The more rackets there are in a precinct, the harder it is for them to turn a blind eye. Similarly, if there have been a lot of recent ‘unexplained’ deaths in a precinct, the police simply cannot ignore it. Still, as a precinct owner, you can build improvements that can blunt the effectiveness of Chicago’s crew in blue.

Another big factor is your relationship with the police. Unlike the other factors, this affects all the precincts in your criminal empire. Send a generous donation to the chief of police’s retirement fund and his officers will make sure their vision gets poorer when they walk the beat through your part of town. 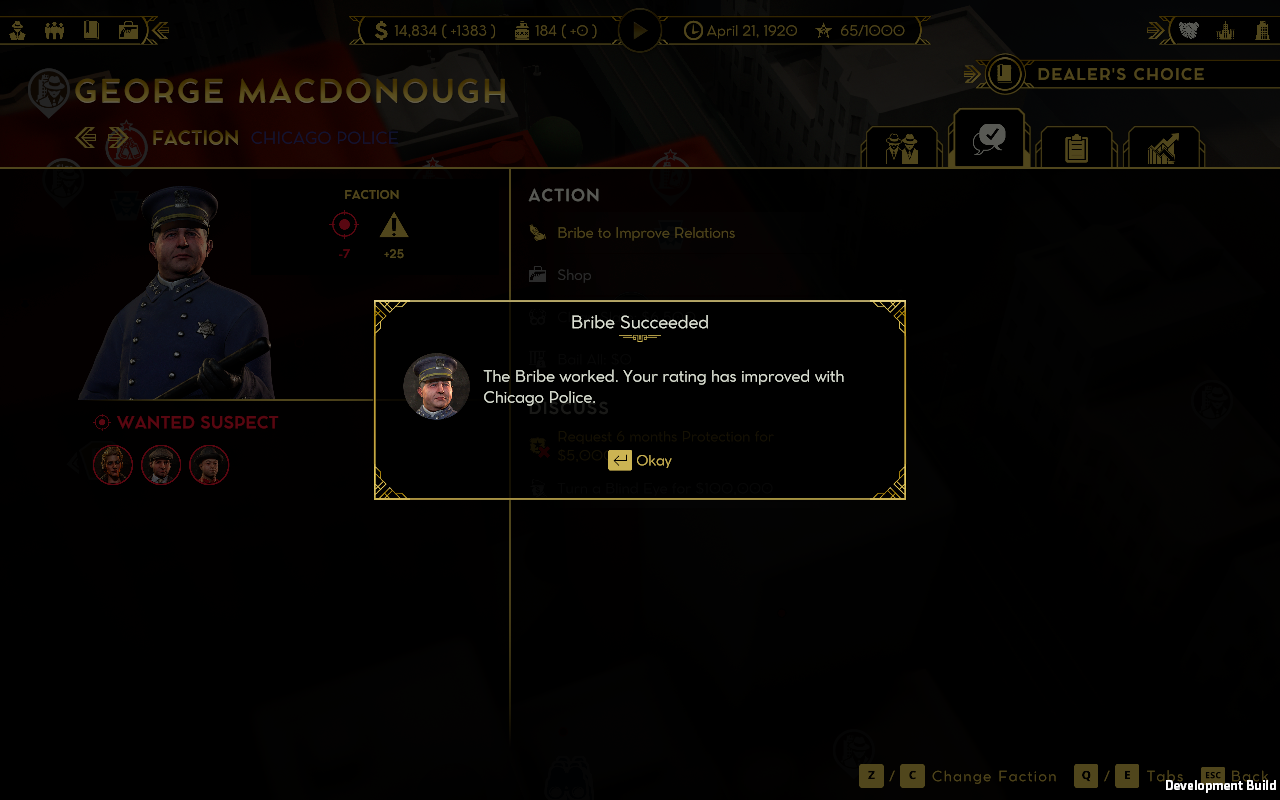 For many of you out there, we’ve reached a moment you have been waiting for: we have begun preparations on introducing modding to Empire of Sin. It’s early days for this particular racket, but starting from The Precinct, we will be gradually rolling out modding support starting with phase 1.

You will be able to subscribe to mods through the Steam workshop and Paradox Mods and manage them through the Paradox launcher. In the initial stages planned, the modders among you can work on text-based assets like Lua gameplay scripts, with more modding capabilities planned for the future.

So, that’s all our source could bring us on The Precinct for now. The good news is that while you’re still wrapping your head around all the new features, you won’t have to wait long before you hear more. Word on the street is that Capos and Dons are eyeing up PDXCON as the next Sit-Down location to share even more news about future updates. Make sure you don’t miss out, it’s going to be big!

Until next time, Happy Sinning.