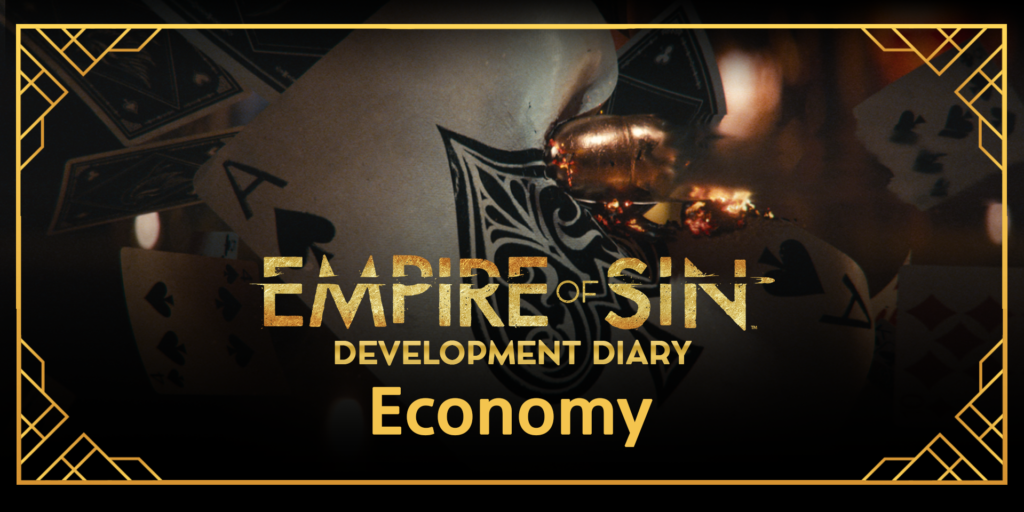 We got word through a recent Sit-down – otherwise known as the live Q&A over on Discord – that it was high time we shared some insight into the economical aspects of the game. It seems some gangsters out there wanted a bit more information on where their money was going when they invested it in Chicago. Well, message read loud and clear, boss! We sat down with Senior game designer and Empire of Sin business mogul, Chris King, to pick his brain on prohibition, Chicago’s economy, and how to get the most from your empire. In the back corner of his favorite speakeasy, he laid it out like this:

In Empire of Sin, crime pays once a week. All your rackets (casinos, speakeasies, and brothels) make their revenue by getting customers through the door. Open a few breweries to supply those rackets with illegal hooch and you stand to make a lot of money. When it comes to speakeasies, in fact, serving alcohol is the only way they can make money. For some reason, dry bars didn’t take off in Chicago (who’d have thought, right?). The only rackets that can keep earning decent profits without alcohol are your brothels. That’s something to remember if the BOP comes along to shut down all of your breweries. 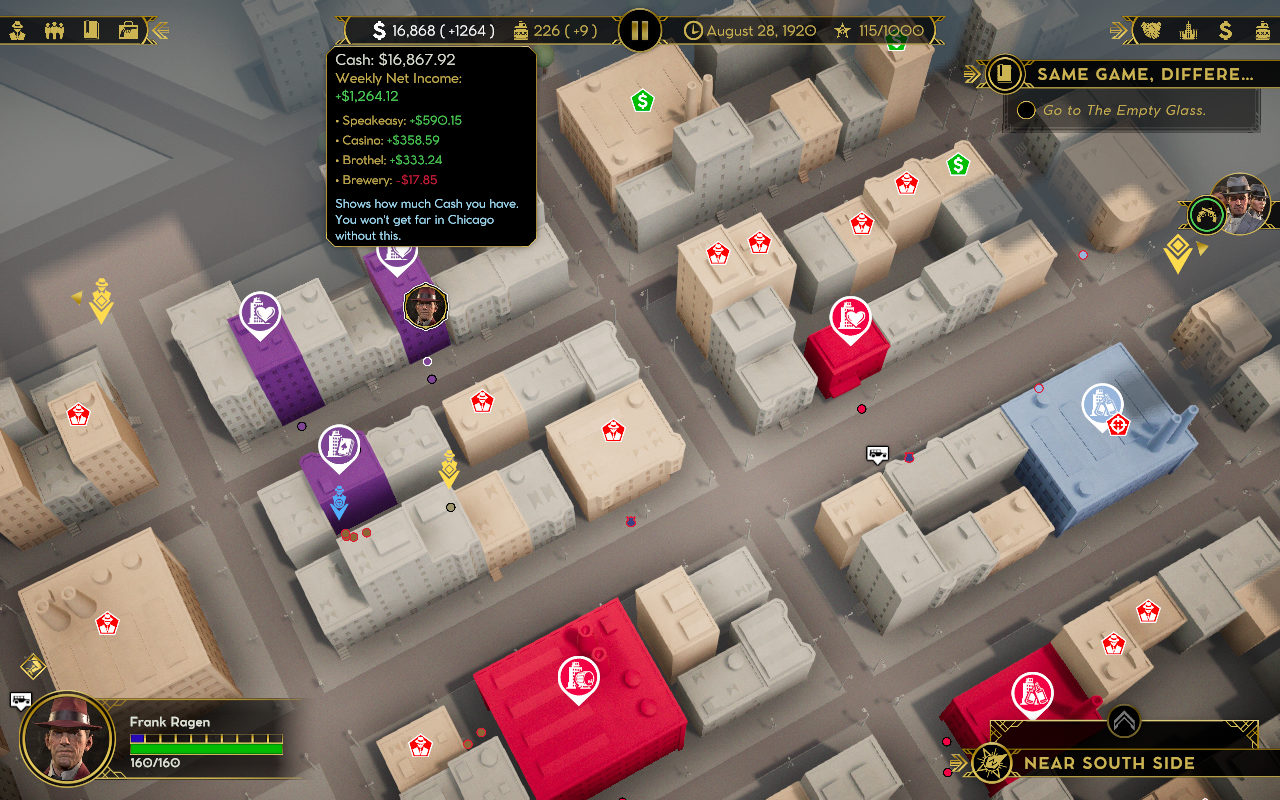 Racket earnings are calculated by the number of customers frequenting the place, multiplied by their average spend once they’re in there. The more customers you can maintain, the better your bank account is going to look. Casinos have a spending range that helps determine their profits. Be warned, at times they can be unstable. Sure, in the long run, the house always wins, but now and then people get lucky on the one-armed bandits and will take your week’s profits for the jackpot.

Though it may feel like it sometimes, the game’s thirteen neighborhoods aren’t solely occupied by gangsters and mob bosses. There are also thousands of hard-working Chicagoans that make up the majority of your customer base. Each neighborhood has a certain amount of customers available to indulge in the vices you provide. 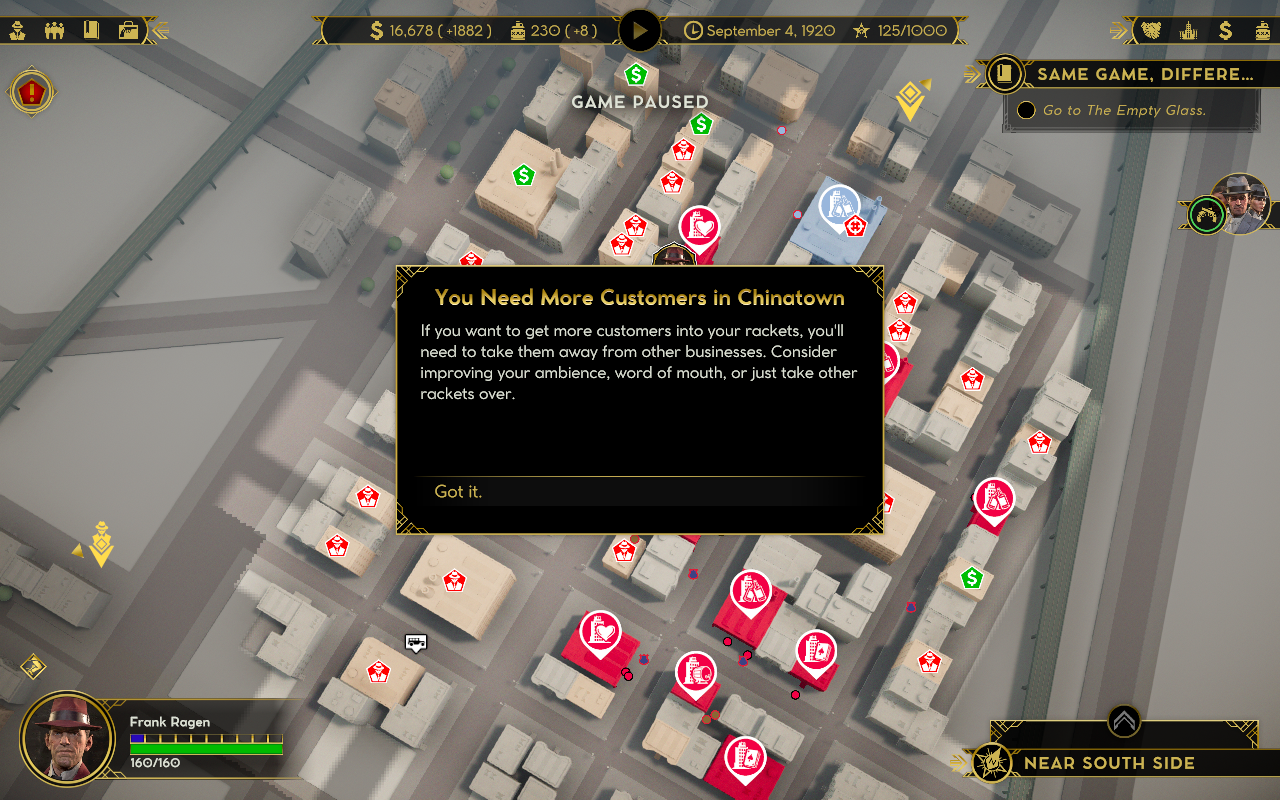 It’s on you to turn these customers into regulars that don’t stray from your establishments.
With a limited number of customers to go around, things are going to get competitive with other factions. After all, there are only so many places revellers can go in one night.

That’s where Draw comes in. Draw determines how customers are spread out throughout rackets in the neighborhood. It’s why your Word of Mouth upgrades are so important. Word of Mouth directly impacts your racket’s draw and is essential in getting customers into your places before they find a favorite bar stool elsewhere. 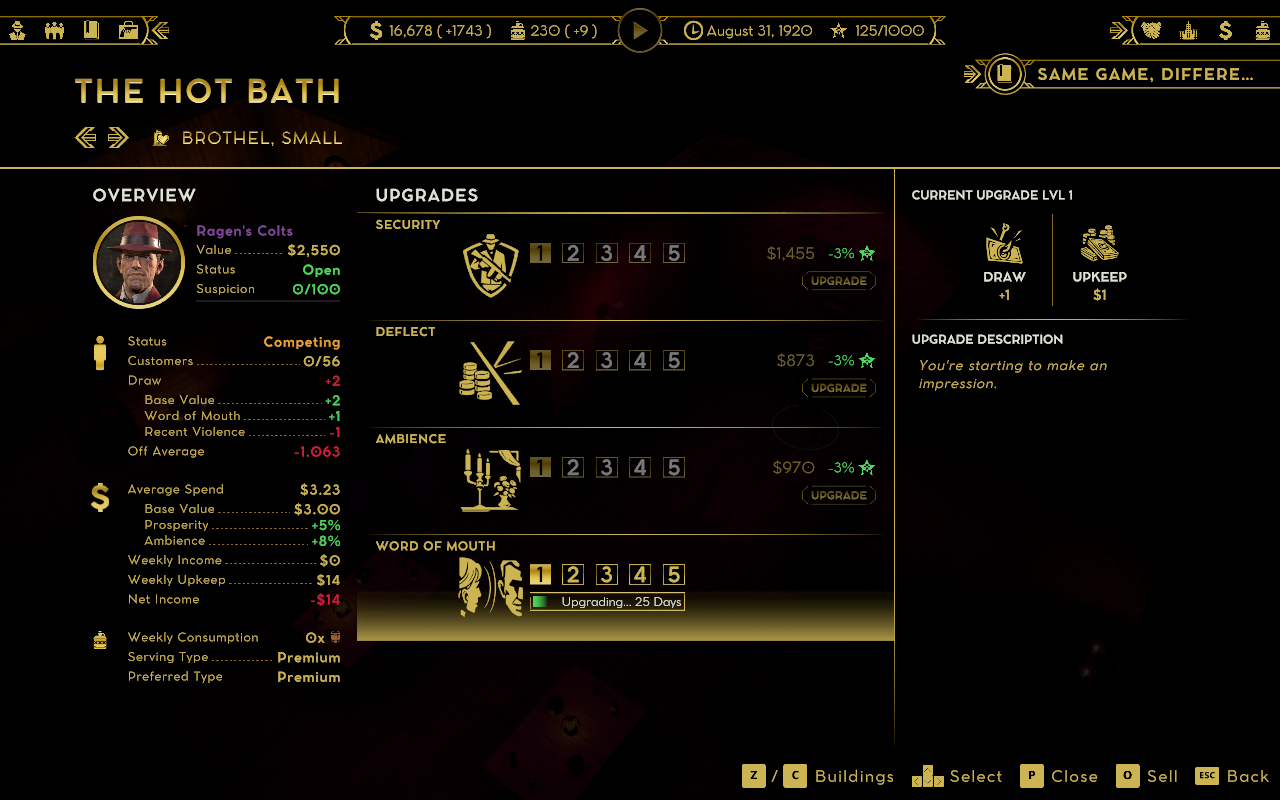 If two rackets of the same type are close to each other, they can influence each other’s draw. If a run-down speakeasy serving swill and bar fights are right next to one that promises music and cold beer, customers are going to go with the second option. So, try to stay one step ahead of the competition.

Prosperity comes down to how affluent a neighborhood is and helps determine the number of customers you can get into your rackets. In general, the better quality of alcohol you serve, the more money you make. But, for those of you who like to maximize your profits, you can earn a little extra if you stick to the neighborhood’s specific tastes and serve their preferred alcohol type. 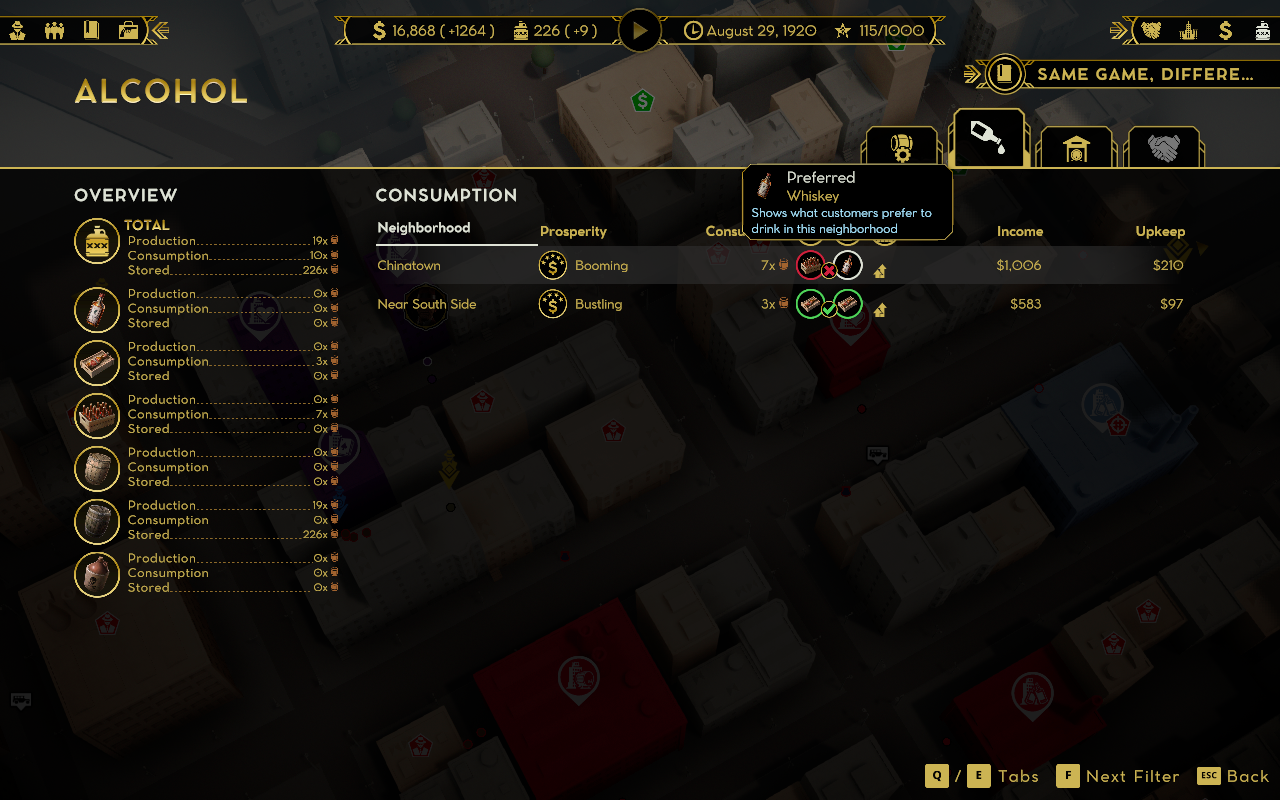 You may have the best whiskey distilled this side of the Atlantic, but that doesn’t mean every neighborhood instantly wants it. Some neighborhoods want a drink that pairs well with the sewer rats and street violence of their surroundings, and in that case rack or swill do just fine. Upgrading rackets help to boost prosperity in a neighborhood, and with it being the decade of wealth and excess, prosperity will naturally increase all over the city throughout the decade. 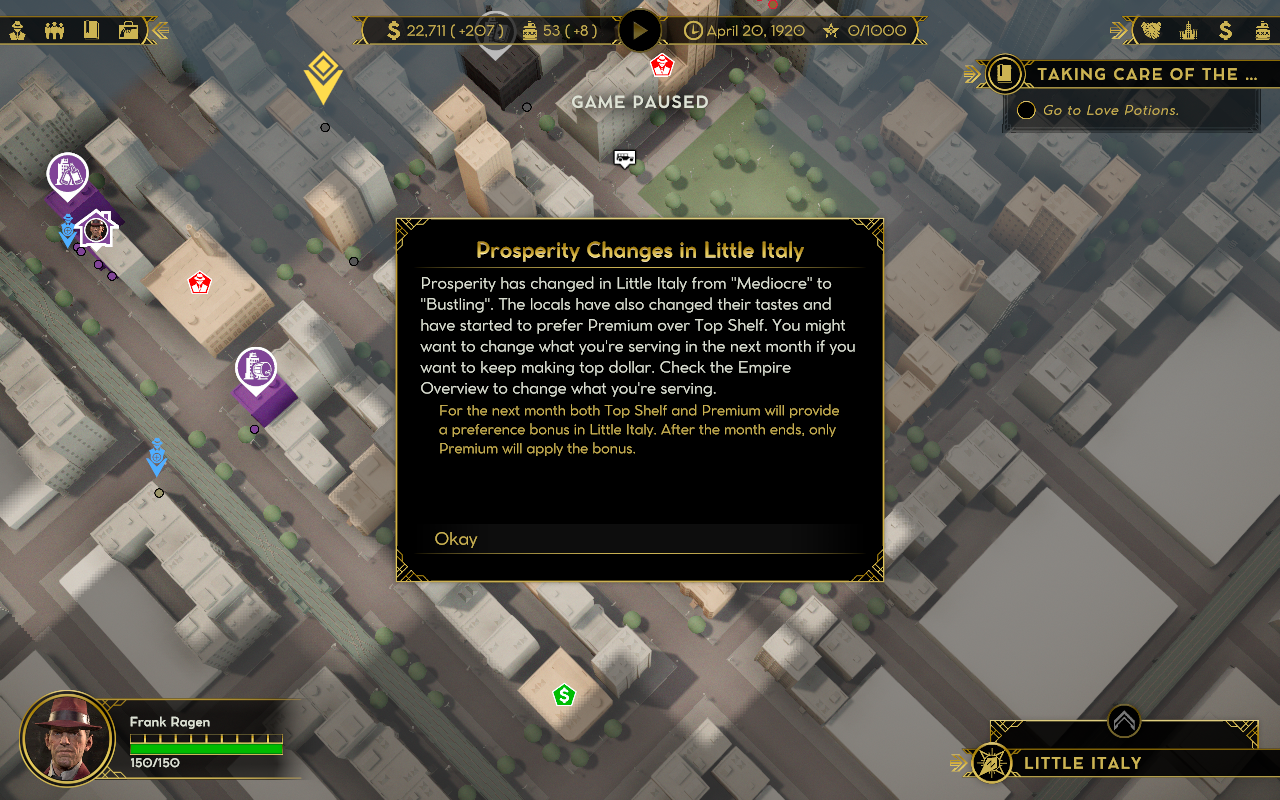 Too much violence in one neighborhood affects how many customers are willing to stay there. Nothing ruins a good night out more than open hostility and gang wars, and socialites will stay away from neighborhoods where all too often, gunfights ruin the mood. What’s more, violence gives a neighborhood a certain image, and prosperity tanks if a neighborhood earns a bad name for itself.

The decade has come to be known as the Roaring Twenties, and over the whole ten-year period it’s expected that the population will increase by 25%. It’s obvious when you look at Chicago. Every day it seems more people are moving into the city and the population is swelling.

Every month you should notice that the customer base in each neighborhood grows a little more. It will do this throughout the ten-year period of your game, which means more money for you, provided they go to your rackets and not your enemy’s.

Synergies are a neighborhood-specific bonus that rewards you for having certain combinations of rackets. Rackets only count toward one synergy at a time and the combinations for synergies are based on poker hands:

Synergies help your empire in two ways. First, they boost revenue for all the rackets in the synergy, and who doesn’t like more money, eh? Second, having a synergy also means you can open a hotel and get more customers. A professional, well-briefed concierge does wonders to increase synergy income. They can discreetly mention where to find a good watering hole while they’re checking your guests in.

When it comes to starting strong, Chris offers two strategies to help maximize your starting cash so as not to bleed too much money in the early game. As the old saying goes: A good start is half the racket battle.

The first strategy he calls ‘The Tycoon’, which is all about buying up the available real estate in your starting neighborhood before you go and hire anyone. This option means you can avoid hiring gangsters for a while, who can be pretty expensive in the early game. Once your racket investments start turning over a profit, you’re in a more stable position to hire some crew and start taking rackets by force. 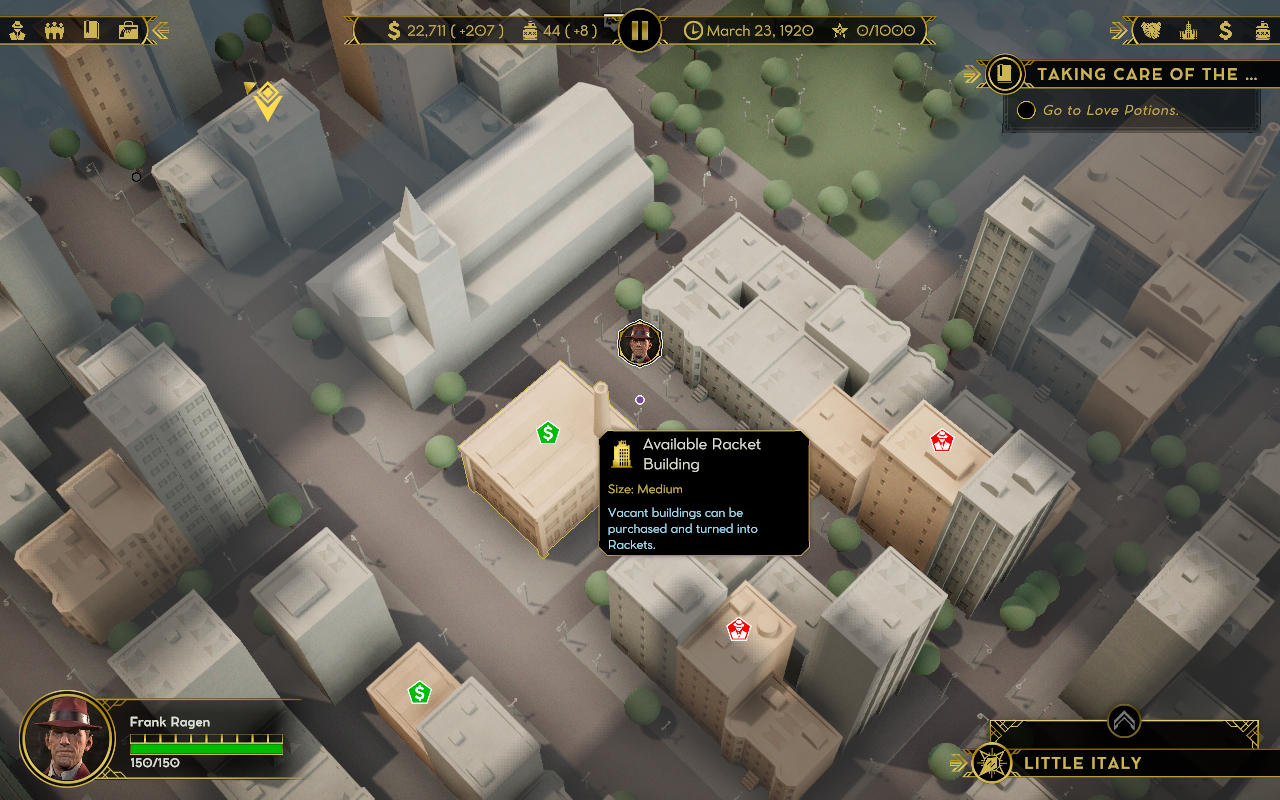 For those looking to get right down to blood and bullets, the second strategy involves getting a gangster or two on your roster right away, but don’t go crazy on an entourage. Keep it small and hit every small racket you can find early and quickly. This will help to boost income and start you on the path to a solid empire, though you stand to make enemies a lot faster.

That was all the information Chris could spill this meeting. He had to leave pretty quickly to meet his builder. Sounds like he’s planning to complete some upgrades before you read this and steal his customers. We’ll be sure to check back as soon as we get more updates. In the meantime, if you’d like us to cover any other aspects of the game, let us know in the comments below!

Until next time, keep Sinning!