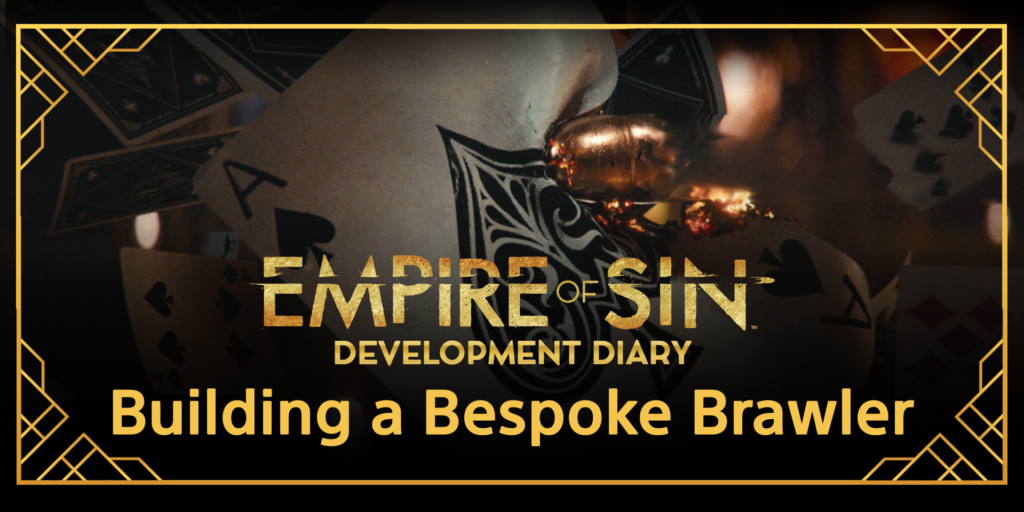 “Friday night they’ll be dressed to kill, Down at Dino’s Bar & Grill”

It takes all sorts of criminals to build an underworld. Since launch, they’ve formed crews, double-crossed each other, and made money from their specific skills, but there’s about to be a shake-up. Combat designer Ian O’Neill has started a fight club behind a speakeasy in South Loop where some of the city’s mobsters are gearing themselves up to be a whole new type of gangster. These guys and gals ain’t interested in guns. They prefer doing things the old-fashioned way, with a lead pipe and some elbow grease. They call themselves Brawlers. Here’s what we know so far.

Unleashing themselves upon Chicago later this year, Brawlers will arrive in a free update independent of any DLC content. You, the community, are going to help sculpt these Brawlers into their new profession. There are no figures set in stone just yet, so keep in mind that anything mentioned here is liable to change.

A Brawler is a straight-up melee attacker, scouted from a few of our Hired Guns who always considered themselves too brutal for range weapons. Their talent tree is based around some of the existing core talents of Enforcers, so it’s worth mentioning here that Enforcers are going to see a bit of an overhaul in the next few months. The new and improved Enforcers will make their debut around the same time as the Brawlers.

What can you expect from a Brawler’s profession bonus? 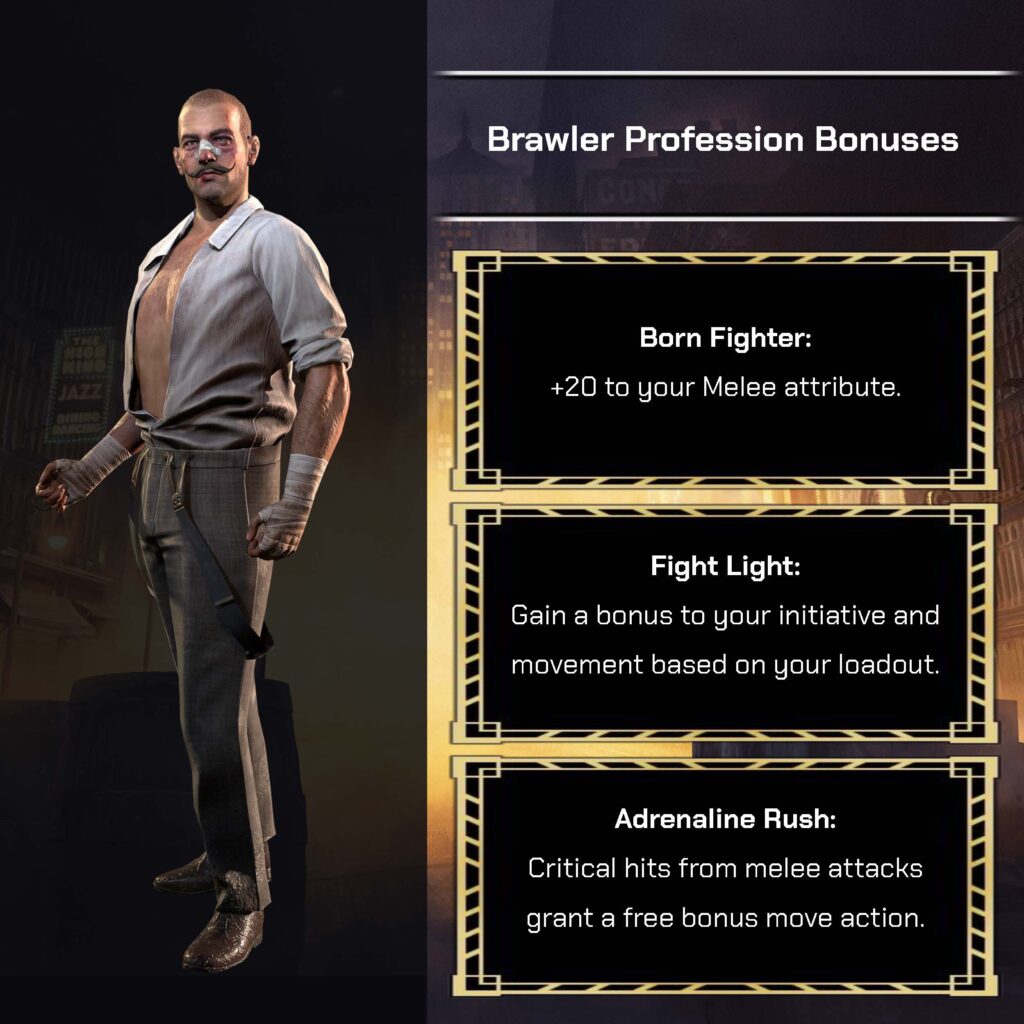 Lastly, there is a brand new profession talent for all Brawlers. This is a talent that the Brawler already has when you hire them:

Flurry of Blows: Allows Brawlers to rearrange faces by hitting the target 3 times with their current melee weapon. 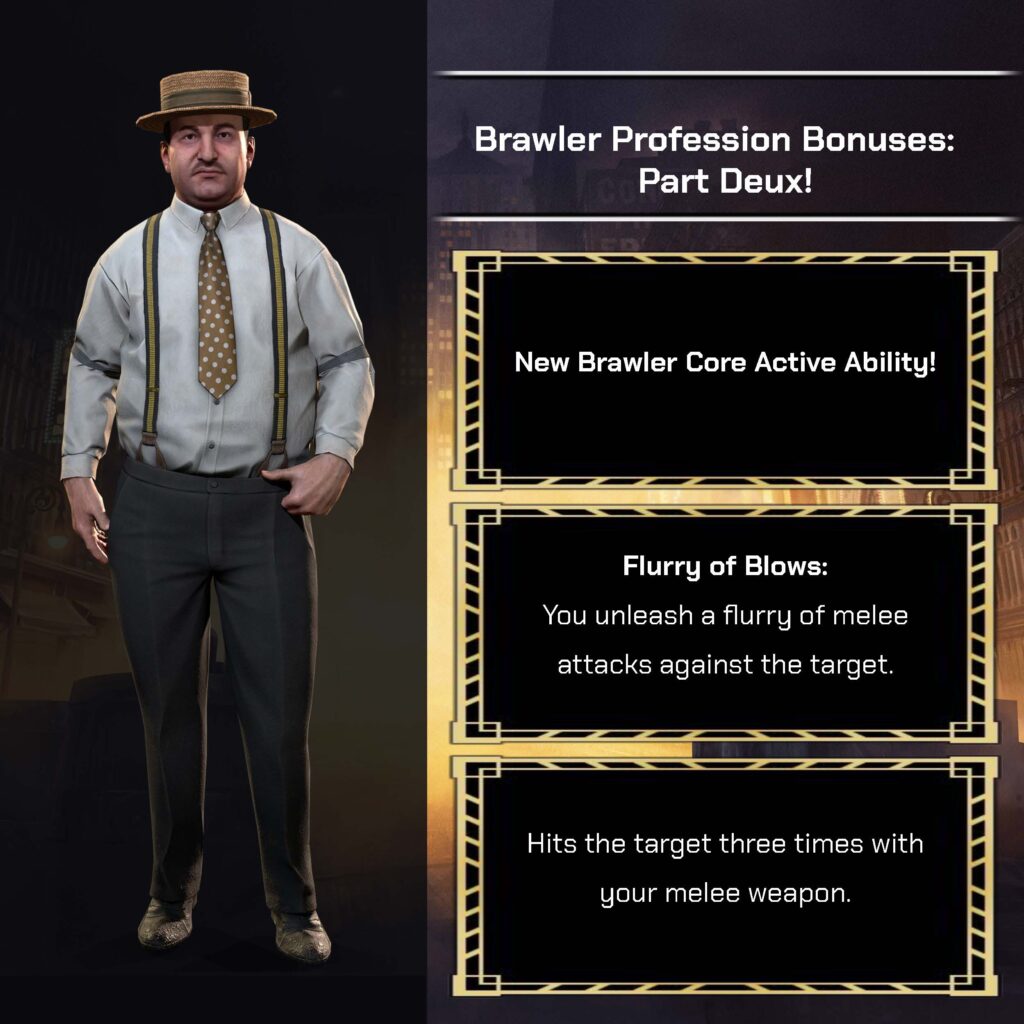 Now, let’s get to the part where you folks come in. In Empire of Sin, the talent tree has five tiers of active and passive abilities. In the case of the Brawler, these talents are all melee-based, some of which are shown below: 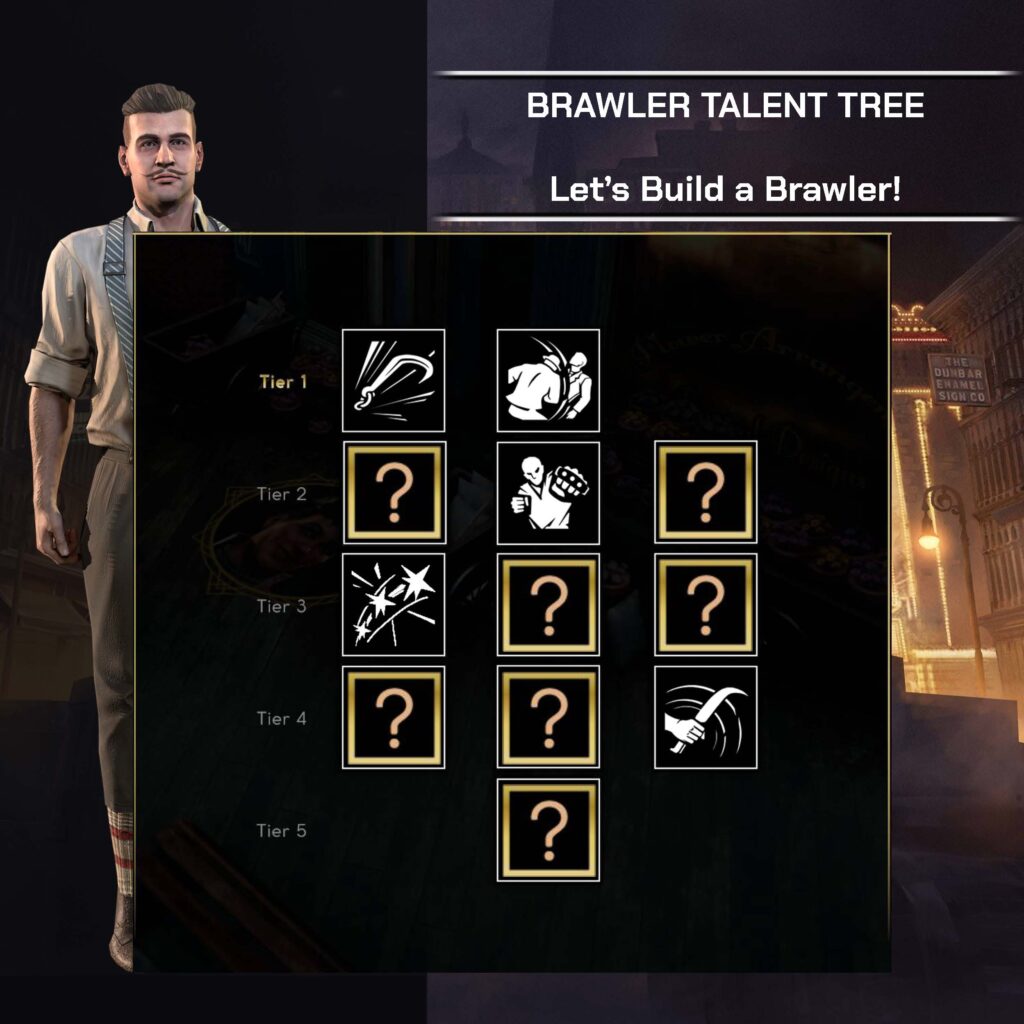 Anything that’s shown in white won’t change as these are the core abilities for each tier. Tier 1 is already baked in with talents taken from the Enforcer talent tree. See all those question marks? That’s where you get to have your say and choose the talents that should fill those slots.

Starting with Tier 2 – Passive Abilities, here are the potential talents that brawlers can choose from: 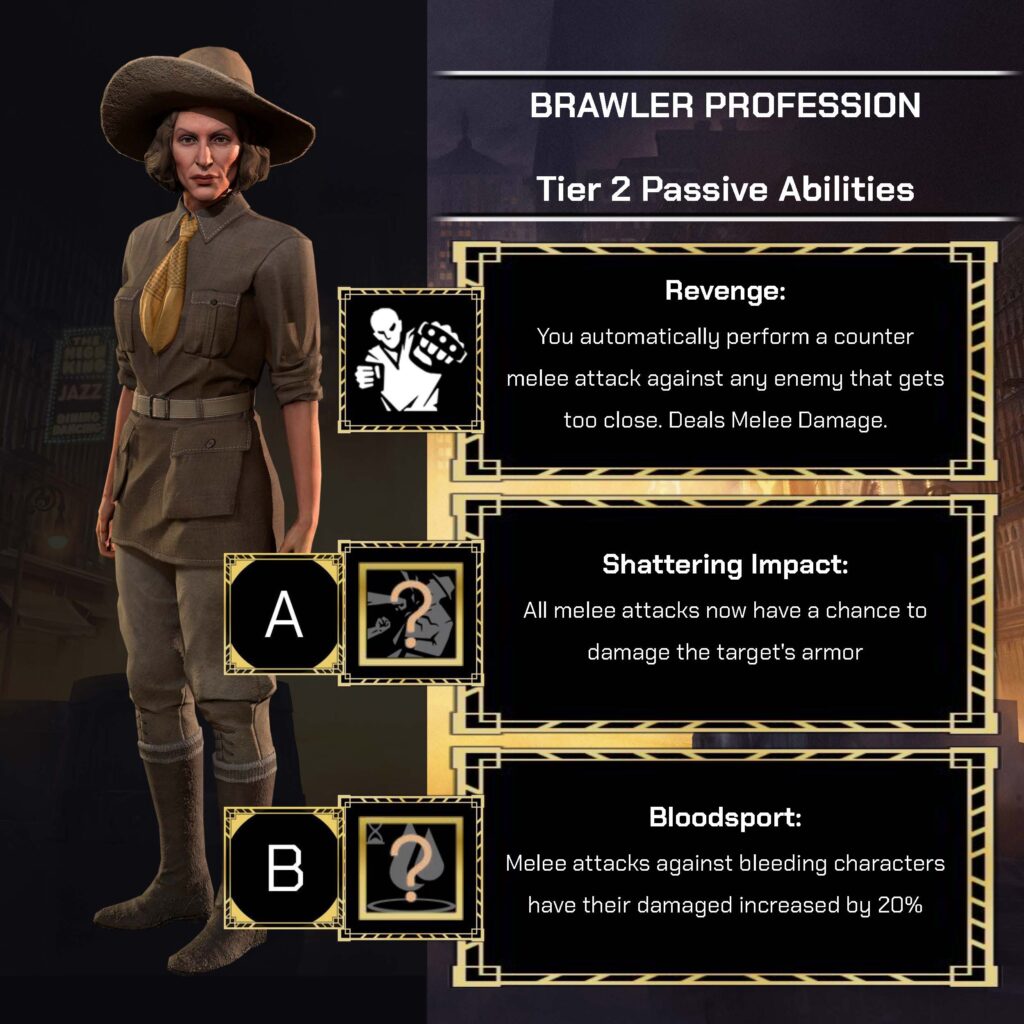 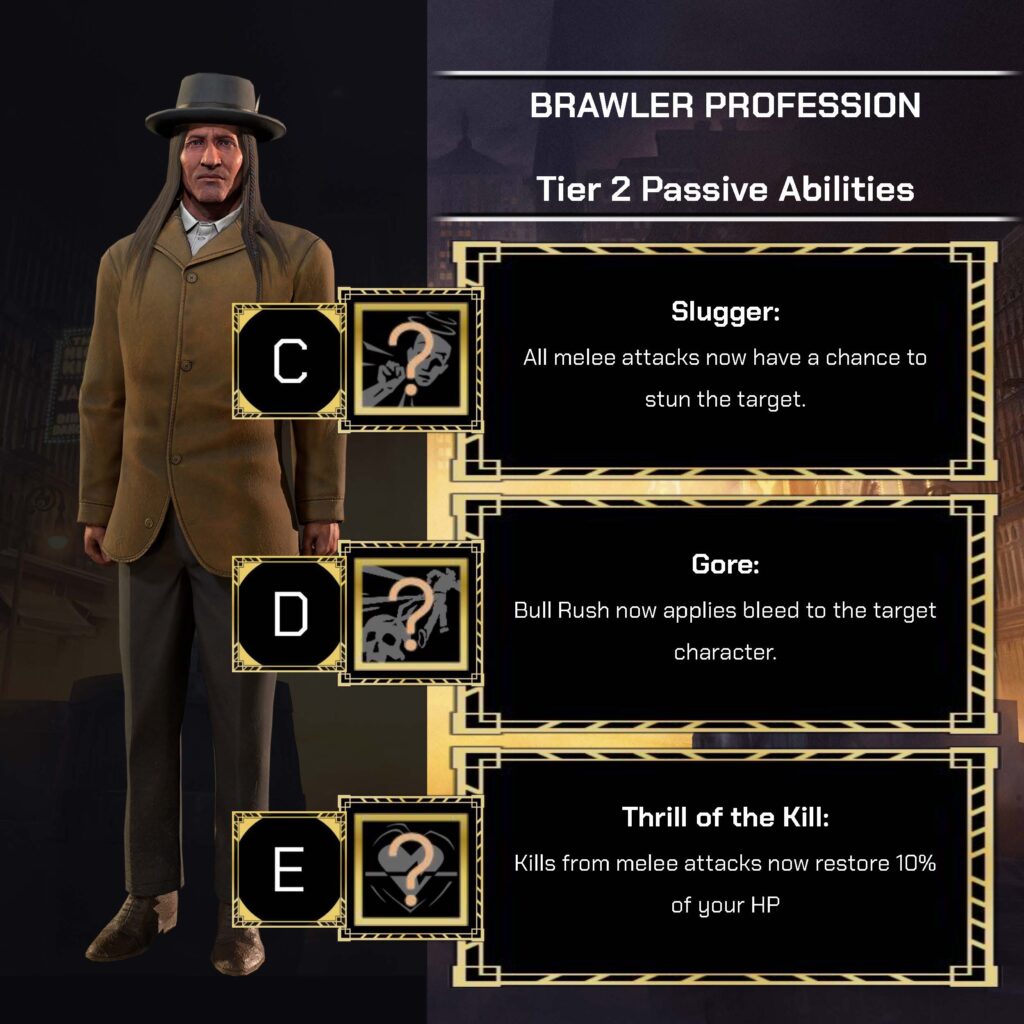 The core ability for Tier 2 is going to be Revenge; a knee-jerk reaction for any Brawler, sure, but also a useful skill to access early in the talent tree. The remaining talents are open for you to vote on.

There are five glorious new options to choose from, but only the top two will make it to the Brawler’s Talent Tree. Let’s take a closer look, shall we? 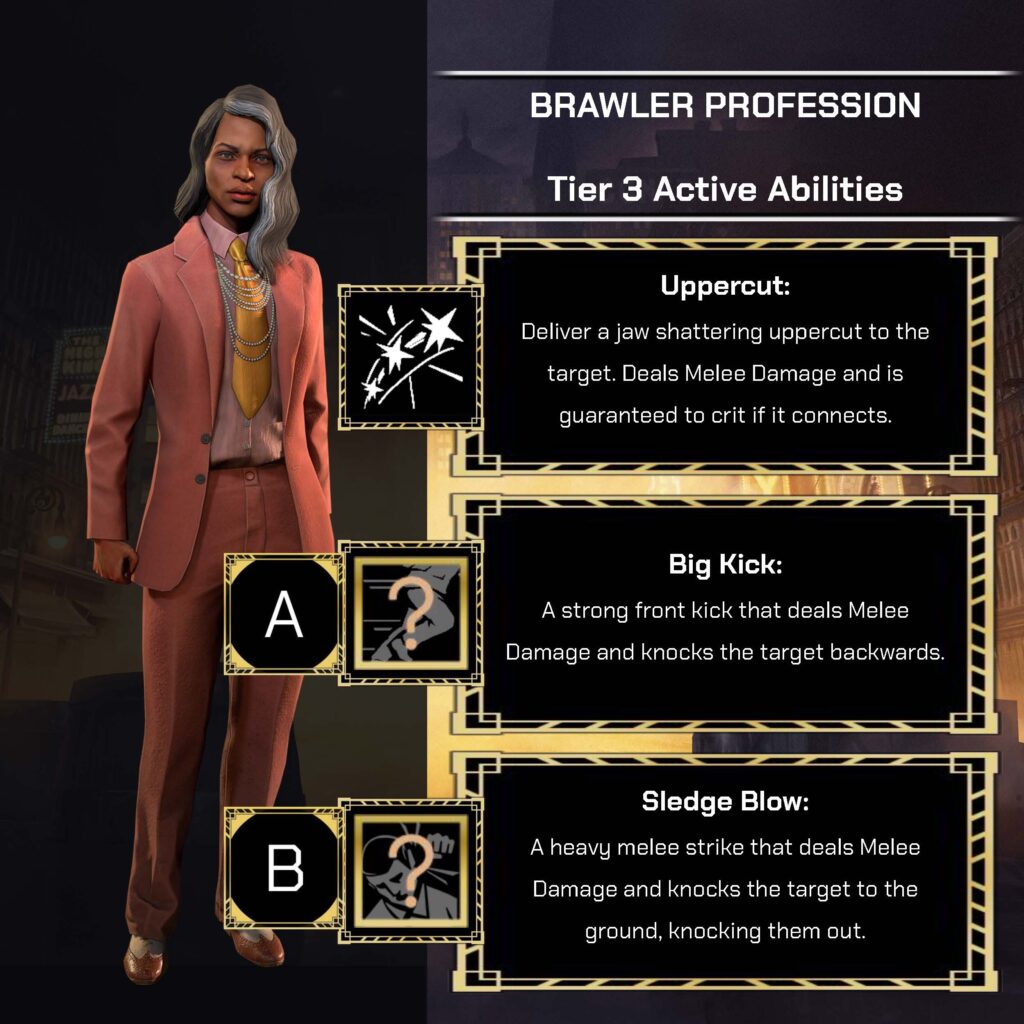 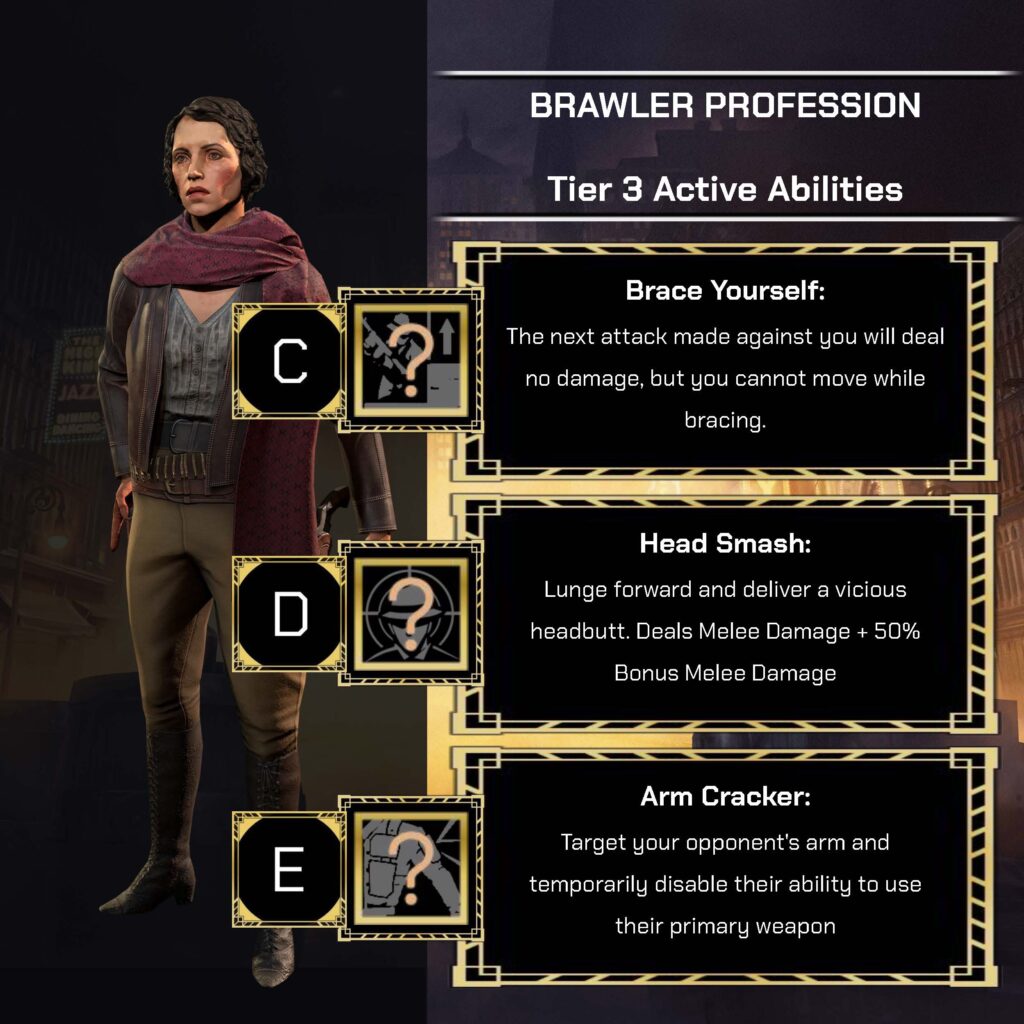 Onto Tier 3 – Active Abilities, with the core talent, Uppercut. This brand new talent, unique to Brawlers, is guaranteed to deal critical damage when used. For the clued-in among you, you’ll know this pairs well with the Adrenaline Rush profession bonus mentioned above. Using Uppercut guarantees your brawler gets an extra move to make their escape after shattering an enemy’s jaw.

Again, the remaining talents are up for a vote. There are five choices, and the most popular two will be chosen for the tier. They are: 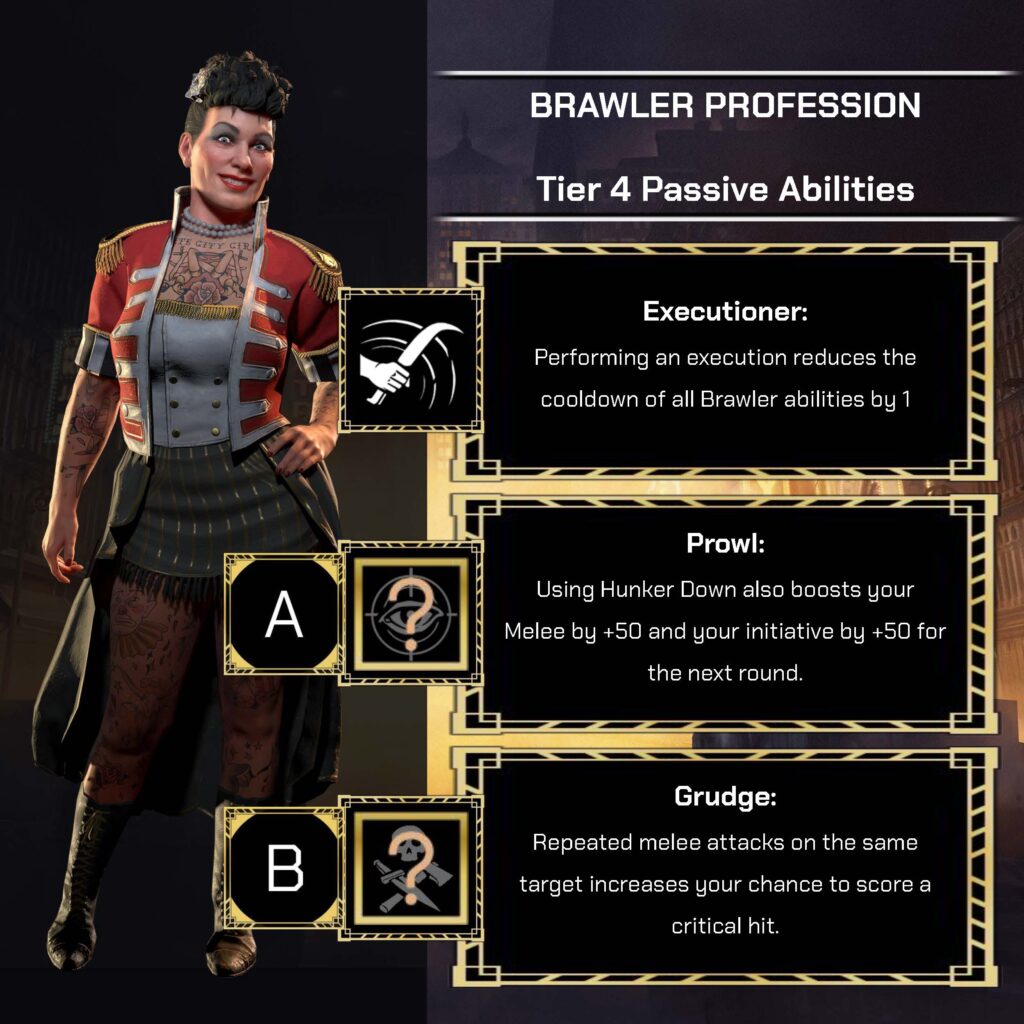 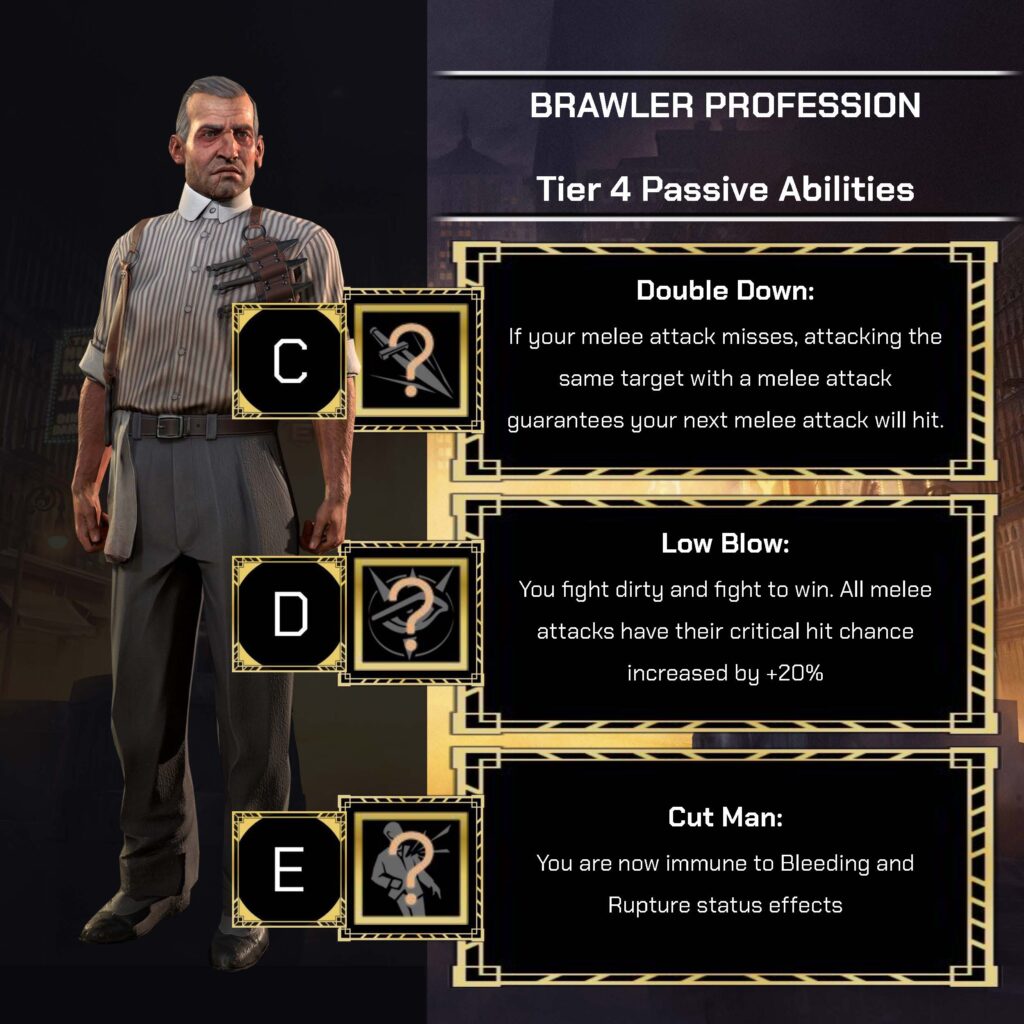 Tier 4 – Passive Abilities, has the core ability Executioner, which rewards brutality by reducing the cooldown of all brawler abilities every time you give an enemy a grisly end.

As for the rest, you know the drill by now, five options, the most popular two are chosen.

At the end of every gangster’s talent tree is their keystone ability. These are the talents that every gangster is working towards to really cement them as a badass.

For Brawlers, three brand new talents are up for grabs, but in true Royal Rumble fashion, they have to duke it out and only one will make the cut. Here are the talents contending: 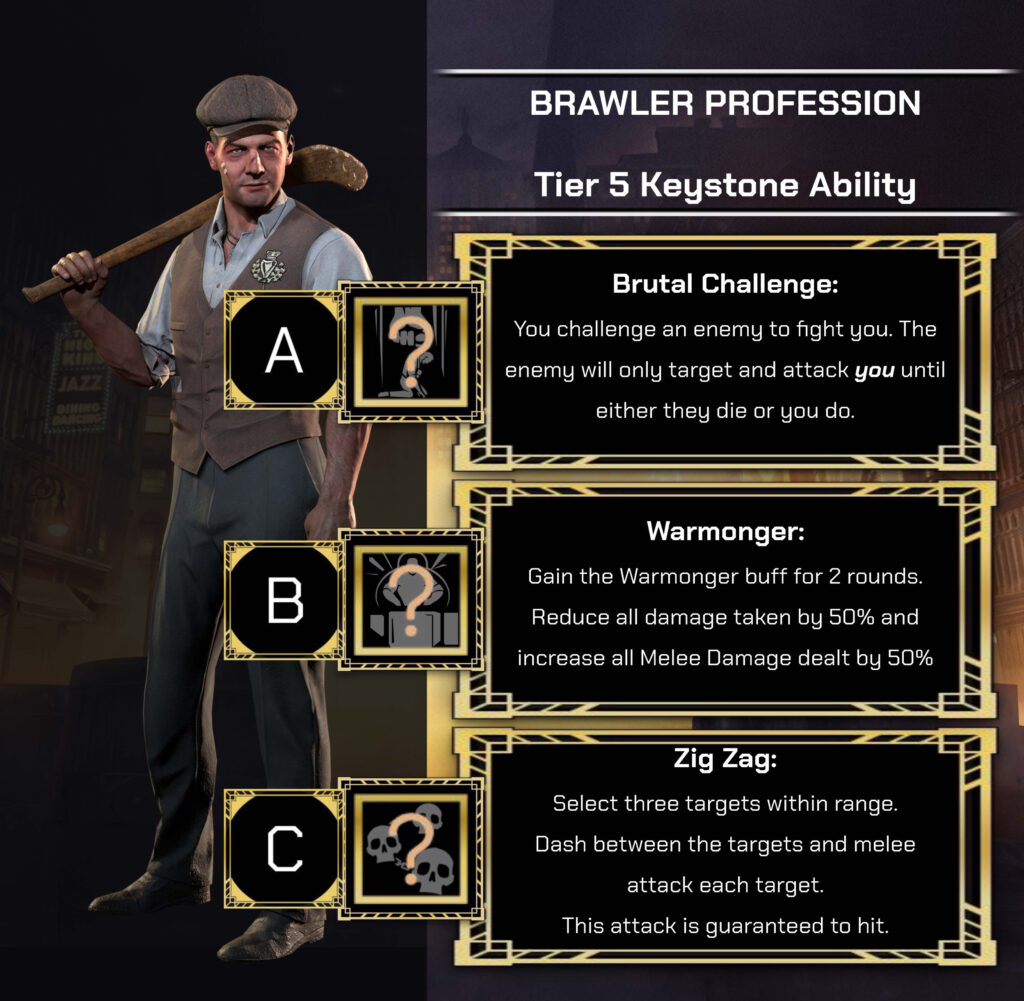 So you’ve seen the talents and know the ones you want your Brawler to focus their energy on, what now? Well, voting is open for each tier and you can have your say by following this link and clicking your preferred abilities. We will announce the winning talents in the coming weeks.

Still in the mood for some fighting talk? This video takes a detailed look at the new Brawler profession and talent tree, guided by none other than the Brawler coach himself, Ian O’Neill. Now, get out there and fight for the abilities you want to see in the game!

Until next time, keep Sinning!