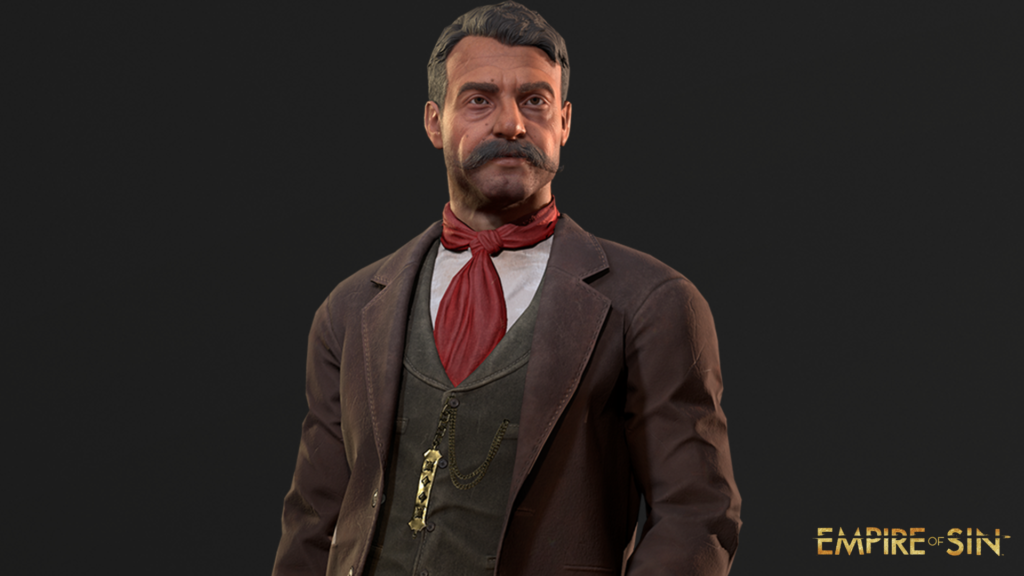 The jury’s still out on Salazar Reyna. Actually, there are many juries, judges, law enforcers, and gangs still looking for him. He ignores the rumors and hearsay that people say about him, then stokes the fire now and then with a lesson in brutality. With a background that’s murkier than a dark alley puddle, his reputation touches near-mythic heights around the streets of Chicago. The more God-fearing folks of the city believe he is not of this world. Some say he leaves footprints in blood wherever he goes. More say they have seen him scalp a man with little more than brute force and a fingernail. Others say the only time you hear him speak is right before you die.

Whether any of this is to be believed or not depends on the individual, but there’s no denying the menacing aura that Reyna carries around with him. He uses his prowess to cut his way through the city’s roughest and toughest criminal entrepreneurs with unflinching savagery, taking the best parts of the streets for himself. His penchant for gruesome ends complements Chicago’s sensibilities, in fact, there are a few things the city’s try-hards could learn from his methods.

All that is known about him is he came from out West, and left a hell of a mess behind him in L.A. The rest can only be guessed at by his boxers build, the south of the border mannerisms, and the eerie legends that follow him. One thing is for sure, Salazar has the stare of a predatory animal who’s used to being top of the food chain, and he’s got no reason to think any differently now that he’s come to Chicago. 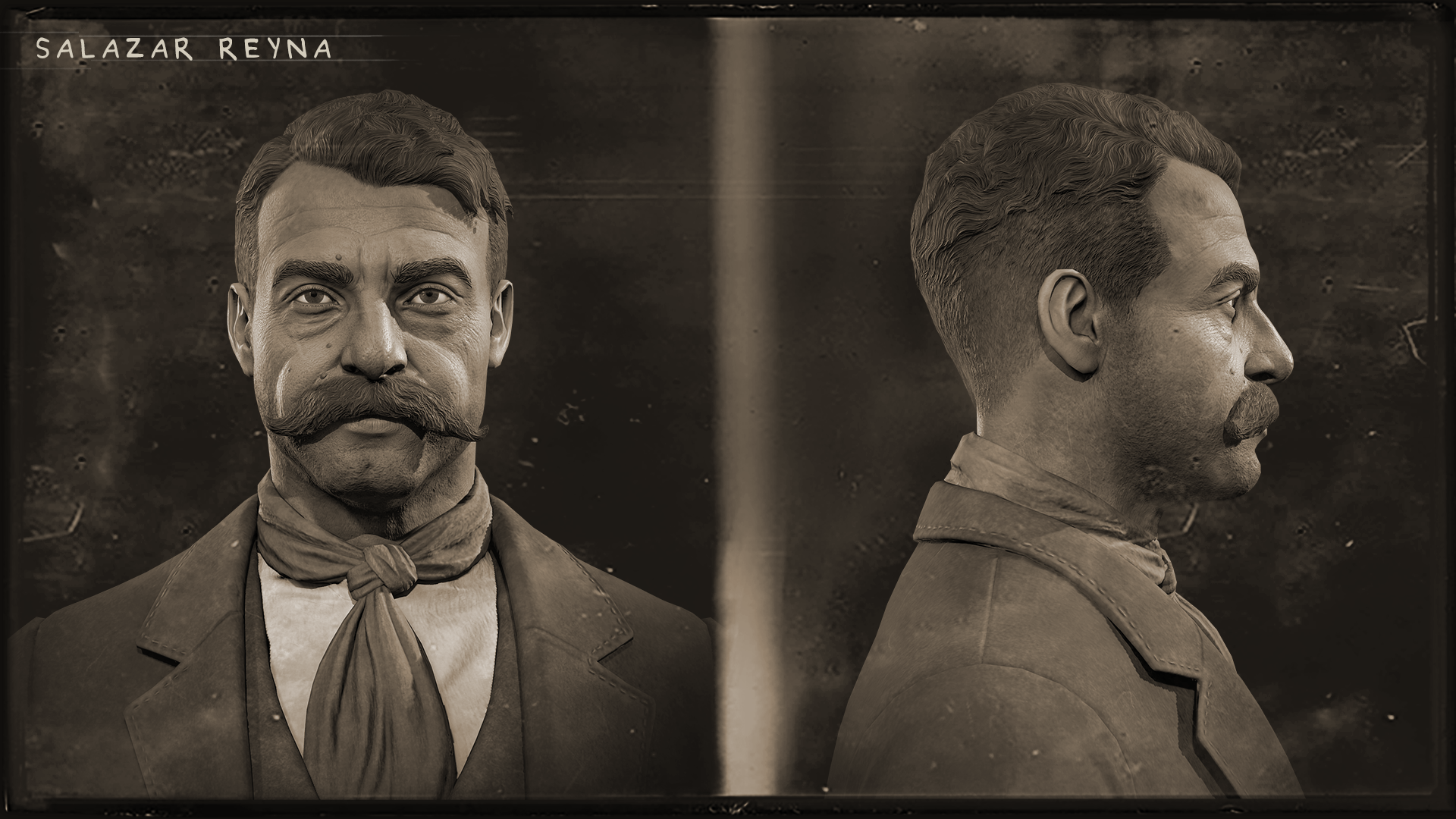 Fugitive from justice, Salazar Reyna, formerly of Oaxaca, Mexico, currently residing in Los Angeles, is being sought by the HOMICIDE DIVISION of the Los Angeles Police Department on counts of first-degree murder, aggravated assault, and robbery.

Salazar Reyna is the prime suspect in a triple homicide in the Silver Lake district. He is said to be ARMED AND EXTREMELY DANGEROUS. If seen, do not approach. Seek out law enforcers immediately.

Denver, CO.– A night of terror ensued on Tuesday last, at a roadside boarding house in the shadow of the Rocky Mountains. Two men have been fatally wounded, with a third currently residing at Denver General hospital with a gunshot wound. Police have identified the wounded as Jacob Mathers, a local and night porter at Wither’s boarding house where the incident occured. The dead – associates of Mr. Mathers – have yet to be identified. One witness alleges that the three men were orchestrating the robbery of a guest who was passing through the city. Police have yet to confirm this statement.

“The one with the mustache”

Shortly after midnight, witnesses state they heard sounds of a scuffle from one of the rooms, followed by a series of shouts. Moments later, a gunshot followed. One witness who woke to the mayhem describes what he saw in the hallway: “The walls were shaking and I heard glass breaking…Once I got to the hallway, a man staggered out from the room next door. The one with the mustache appeared and stuck him right through the eye. I ain’t seen anything like it.”

Witnesses outside the boarding house recall seeing a man crash through the window, right into the street. He succumbed to the wounds inflicted by the glass and was pronounced dead at the scene.

Law enforcers are still searching for the unidentified man responsible for disturbing the peace, resulting in the deaths of two men. Police describe the man as having a strong build, dark eyes, hair, and a large mustache. With the only survivor of the incident unconscious and critically injured, police are appealing to any witnesses with further information to come forward and aid in the investigation.

A witness statement taken by SLCPD in Utah. Mr. John Roberts was witness to an incident of grievous bodily harm at a men’s club where he works. The description of the man matches that of Salazar Reyna…

I started my shift at nine-thirty. By then, Taylor and a couple of others were at a table playing cards. There was some gambling involved. Whatever Taylor’s secret was, he was on a real heater; winning every hand, letting everyone know about it. A real loudmouth too, but sort of funny with it. Expect nothing less from a Texan, I guess. An hour later, he was even getting bored. He’d a stack of cash beside him like one of those big-city skyscrapers.

He played a guy off the table, that’s when the other fella took his seat. Waltzed right over, sat down without a word to anyone. He was tough-looking and just put his money on the table, waiting to be dealt in. Taylor tried joshing him a bit but got no answer. He kept smiling though, hungry for fresh meat.

Only thing bigger than Taylor’s mouth is his ego. He bet big every time. The new fella worked him quick, took Taylor’s heat right out from under him. It was a spectacle, the other guys was even rooting for him, I bet. He was finally shutting Taylor the hell up. Still, not one word passed his lips, and he was winning big. I mean real big. He just stared around the table, eyes meaner than a jail hound. Almost looked like winning annoyed him.

So it got to about twelve-thirty. There was me, a guy at the table hanging on by a couple of dollars, Taylor, and the quiet man. Taylor decided to go all in, must’ve fancied his hand. So he threw in, put up two middle fingers, and said to the quiet man, “I’ll raise ya two of these.” I tried shouting over to remind him this was a Gentleman’s Club, but the quiet man cut me off. The only thing he said all night: “It’s a free country. He’s free to lose them if he wants.”

Taylor put down three queens. The quiet man showed him a full house and scooped the pot. That’s when he done what he did. He stood and came around the table. Taylor was starting to crack wise with him, but The quiet man just punched him hard. Then he grabbed his hand, put the middle finger in his mouth, and bit down.

The sound…it was ghastly. That’s what I remember most, this wet crunching noise, and Taylor screaming to high heaven.

He went sheet white, staring at the mess of his hand when the quiet man moved onto the other one, staring into Taylor’s crying eyes the whole damn time. I don’t recall much after that. There was blood all over the table, the floor, Taylor’s Stetson. I didn’t want to get too close to that barbarian so I just sent for you guys. He turned and walked out as soon as he did it. Not another word. Worst part is, I didn’t see him spit the fingers out, and they was nowhere to be found when y’all arrived. But he must’ve, right? He must have.

This statement signed by John Roberts is true to the best of my knowledge and belief. I consent to it being tendered in evidence and do so willingly under the eyes of state law.