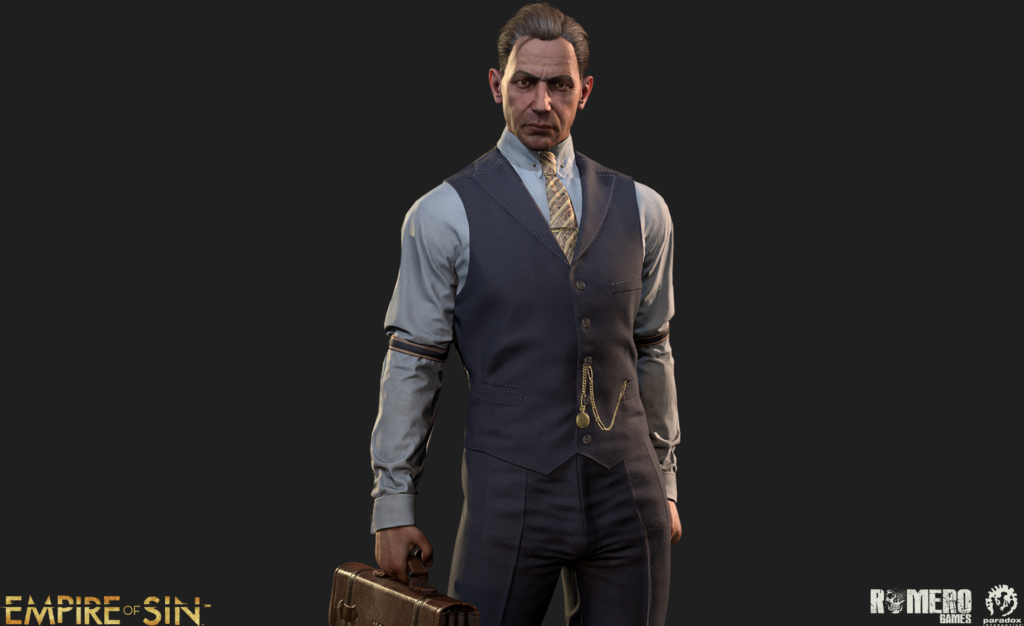 Maxim Zelnick is a compulsive problem solver. If he wakes up facing Doomsday, he has it in a vice by breakfast and turning a profit by lunch. In the chaos of prohibition Chicago, he’s the eye of the storm. An accountant for organized crime, there’s no room in his head for a hot temper, that just overcomplicates things. He deals only in two currencies: money and violence. It’s all business.

It didn’t matter to Zelnick that he was born poor, success was always going to be the outcome. As a butcher’s son, he got used to blood and bones from a young age and saw the direct relationship they had with earning a living. His was a head better suited for what he calls ‘real-world numbers’ and he dropped out of school young to hustle a floating dice game around the streets of Brooklyn. By sixteen, his enterprise had him earning more than his father, though he was just as reliant on the butcher’s knife.

He began bookkeeping for the family business after noticing his father’s accountant was skimming their already meager profits. When the accountant disappeared Maxim drew the attention of a local criminal gang. Seemingly the Zelnicks were not the accountant’s only clients. With his handiwork leaving no trace of a body, and his obvious intellect talking around the local heavies, Maxim was offered a new job as an accountant for Murder Inc. The instructions were straightforward, cook the books and trim the fat from the organization.

Zelnick excelled at both. Within a year his sharp eye had doubled their profits and sniffed out the dead weight, leaving no sign of a paper trail. Now, Zelnick’s at the top of his game, but for all his success, he remains tight-lipped about his business and values discretion. Still, he knows what he wants and Chicago is next on the chopping block. As far as he’s concerned, his new venture in this city is just another opportunity with ‘blank cheque’ written all over it. 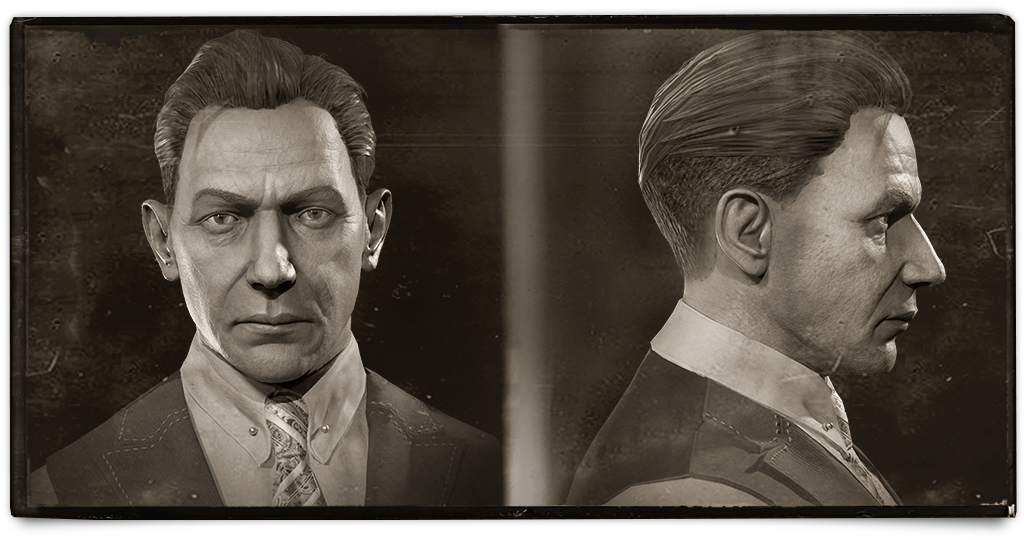 The following is a letter taken in evidence by Chicago P.D. It is an alleged correspondence between Mr. [REDACTED], a high-ranking alderman, and Maxim Zelnick. The packages cited in the letter have never been found.

Dear Mr. [REDACTED],
I trust this finds you well. I hope you don’t mind, I took the liberty of procuring your home address. The personal touch may have been lost in transit had this arrived at your office. Worse still, it may have never reached your desk, and with the sensitive nature of this message, I could not risk that happening. I’m sure you understand. Mr. [REDACTED], I hope you can tell from my decision to contact you directly that I am a fair man, interested in upholding the utmost discretion, provided we can reach an agreement.
I appreciate that I must be something of a novelty around the city. Having just moved here, there must be some interest among you locals as to my intentions and potential business ventures, so I can understand your inquisitive efforts to find out more. What I do not appreciate, however, is your insistence on plunging your nose into my business. My affairs, business or otherwise, are of no concern of yours, and if I may be direct for a moment, Mr. [REDACTED], to find your employees snooping around my establishments appeared highly unprofessional on your part.
Still, I was sorry to hear of their disappearance afterward. Missing over four days now, and still no clue as to their whereabouts? It’s a shame to think that three grown persons can disappear like that in broad daylight. It’s audacious, really. I can imagine it must be deeply unsettling for you, a high-ranking city official, to feel so defenseless at present, to know that no one in this city is truly untouchable.
It is why I feel it necessary to forge good relationships having just moved here. In a place as wild as this, it would be helpful to know that there are allies amongst us, that we can help each other out when the time comes. As I’m sure your little birds told you, I was a butcher in a past life. To show you there are no hard feelings between us, and that I know you will not be dabbling in my affairs again, please accept the enclosed as a little peace offering.
Package #1: Some may recoil at the thought of eating tongue, but I assure you, Mr. [REDACTED], it is a fine cut of meat. Given the quality of this one, in particular, I imagine it was used extensively prior to finding its way to my butcher’s counter.
Package #2: Admittedly, limbs are generally the tougher cuts of meat, but I went to the effort of tenderizing this leg for you before dicing and sending it. This is perfect for a stew if you don’t mind a little gristle.
Package #3: This little piggy seemed to be fed well. I took this cut from the shoulder, you can see an abundant marbling through the meat. One for the slow roast, if I may offer a suggestion.
Package #4: Honestly, there’s not much that can be gleaned from the head, but it could make a nice centerpiece at your next high falutin dinner party. I feel it really makes a statement, don’t you think?
Now Mr. [REDACTED], I’m sure there is a part of you that is only crying out to make a song and dance about all this, but please, there is no need to thank me. There is plenty more where that came from, should I ever find myself in an excess of meat again. Perhaps you and I could do business once I’ve fully settled in. Until then.

Maxim Zelnick isn’t the only new face around Chicago. Along with him is a whole new type of gangster that specializes in making problems disappear without raising a bullet storm. Though they may offer roughly the same service, each of these fixers has a different background, traits, and are more diverse than the last. Let’s allow them to introduce themselves.

A judge from Arkansas, Judge Miller earned the nickname, “The Pillar”, for being such a pivotal part of her community. Little did the public know, she was a pillar of the criminal underworld, too, using her connections to enrich herself and her criminal compatriots. She believes she can get anywhere with slick talk and the life she’s made for herself has proven it. After being run out of Arkansas by a crusading, idealistic young lawyer, she’s come to Chicago to get back to her old ways.

The daughter of a Herero government official and a German artist, Gertrud’s family came to America when she was young. A trans woman, she flourished in New York’s underground scene. The strong community she found fostered a sense of kindness in her as well as a belief in finding one’s tribe. Used to creating spaces for her and her chosen family, through less than legal means, she is a skilled organizer. Brandt has a warm open heart matched by her cold ruthlessness in dealing with those who threaten her and those she cares for.

Rachel Steinman grew up poor in New York’s Lower East Side and was the only Jewish kid in an Italian neighborhood. Before long her shrewd mind and sharp tongue had her working as a teenage drug dealer, loan shark, and as a numbers runner for a Sicilian crime syndicate. Still, she found her Jewish heritage made her an outsider among the mafia. Rather than letting this destroy her, she turned it to her advantage and moved to Chicago, using her underworld connections to develop with all of the criminal communities in the city, becoming a friend to all, but loyal to none but herself.

Dr. Ada Santos Souza grew up in São Paulo to a wealthy family that fell on hard times. Though her circumstances changed, her tastes did not, and Dr. Souza used her high-class connections to commit high-class crimes, selling museum artifacts on the black market. But, she found a sense of adventure that pushed her to take even greater risks. This resulted in one of her co-conspirators turning her in for their own skin and she tumbled down to the underground where her circle of influence grew larger. Now, with the high-stakes thrill that such a life brings, she has found she may be exactly where she belongs.

A resident Chicagoan, Dixie is the only son of decent law-abiding parents. As lawyers, they worked hard to get their son a good education, though, after years of watching them fight injustice to gain nothing more than squalor and early graves, Dixie vowed never to forgo a good payday in favor of doing the right thing. Becoming a lawyer solely for profit, Dixie found his niche representing criminals desperate to avoid prison and willing to pay anything to find a loophole. As the owner of several properties, with several high-profile criminals on his Christmas card list, Dixie has never looked back.

Well, that’s all we could squeeze in for this month. While you get yourself acquainted with the new blood, our moles will be out there getting more information for next month’s update. See you then, Boss!