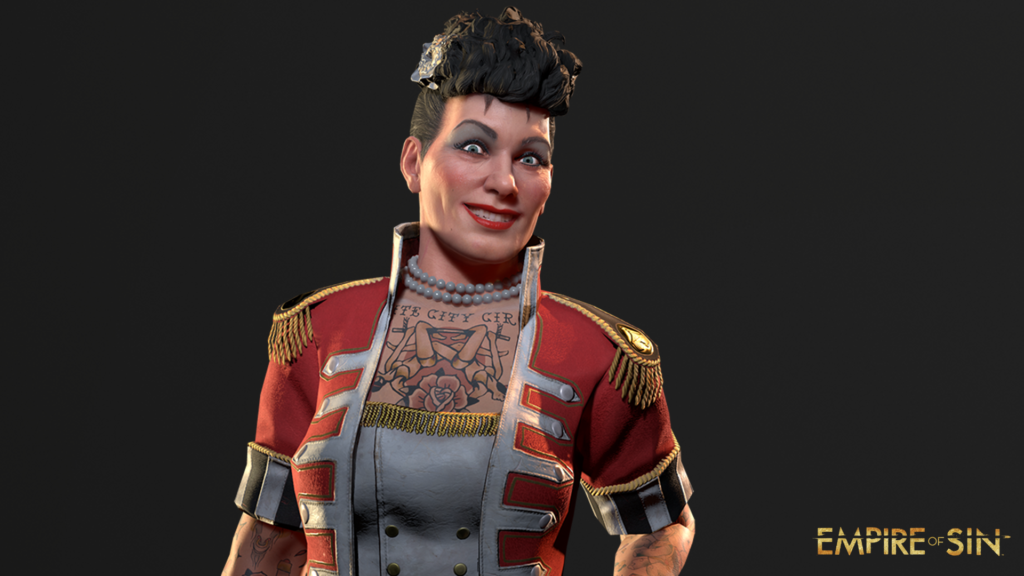 Enough time spent around clowns, swindlers and wild animals gives a person an advantage in navigating the streets of prohibition era Chicago. Maggie Dyer ran off to the circus at a young age, taming lions and throwing knives as a way to make a living. Skills easily transferable for use on gangsters around the city.

She left school early. For her, education wasn’t gained from a stale classroom, but learned through lived experience, doing what you can to survive better than the other guy. The best part was that these lessons didn’t need her to change herself, only to sharpen traits she already had until they launched her to the top of her game.

Sullen as she may be, Maggie has a way with words. A ringleader’s charm goes a long way, and she subscribes to the philosophy that anyone can be bought. Some may come at a higher price, but Maggie’s not afraid to get her hands dirty in getting that price down. Along with the help of some caged friends, she can negotiate most everybody to accept her terms, and her terms only. It’s a good cop, bad cat scenario and no one’s lived to get the better of them yet.

The decision to take up permanent residence with her circus in Chicago’s White City means more than just the entertainment of civilians. Maggie is set on broadening her horizons in enterprise, starting with a few rackets and a protection ring, and ending with her as Chicago’s Number One. Being a wildcard who’s completely at home in a city of renegades, Maggie’s claws are well and truly digging in.

An Interview With Maggie Dyer On A Local Radio Broadcast 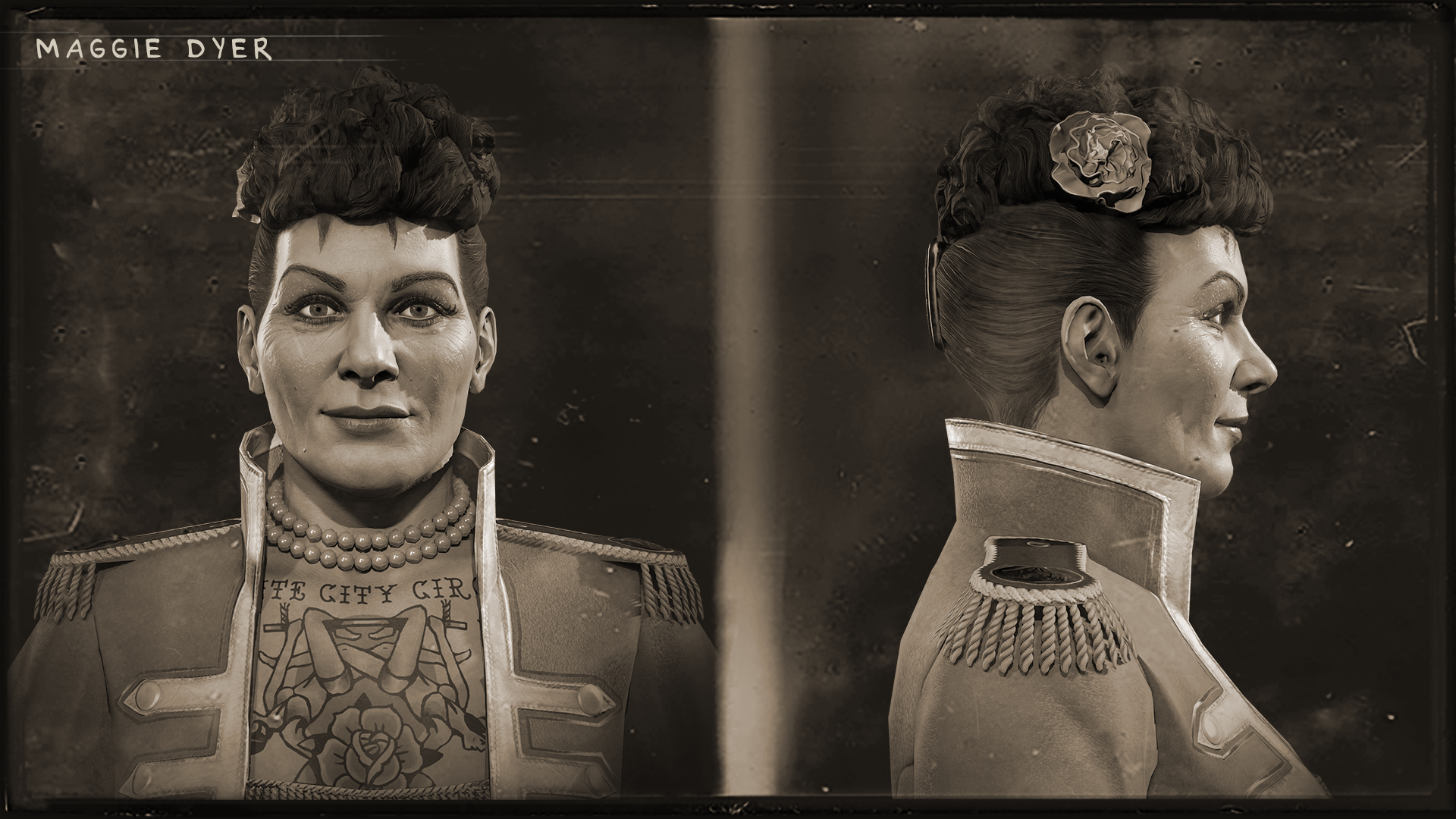 The following is a transcript of a radio interview conducted by popular Chicago South Side radio personality Gus Goldstein, with White City Circus ringleader, Maggie Dyer. The transcript was documented by the Chicago Police department on the night of the interview. Dyer is a person of interest to local P.D. and the interview serves as evidence of some recent allegations made against Ms. Dyer…

Gus: Good evening listeners. It’s a cold Friday night out there and you are tuned to Chicago’s most popular and reliable radio broadcaster, CSS AM. Tonight we have a guest talking about her growing business in Chicago’s White City. The White City circus took up a permanent residence near the city’s South Side some time ago, and it continues to draw considerable crowds to its regular shows. Here with me is the circus’ ringleader and owner, Maggie Dyer. Good evening, Ms. Dyer.

Maggie: Call me Maggie. Y’know I knew a Gus once before. Is that short for Gustavo?

Maggie: Ah! Well, I knew a Gustavo. He was in the circus with me.

Maggie: You remind me a lot of him.

Gus: Is that so? Does he still work with you?

Maggie: Nah, he passed on. Talented performer though, and loyal friend. I got his tattoo on my arm here, see? That’s him.

Gus: That… monkey on a bicycle?

Maggie: A Penny Farthing no less. Y’know how difficult that is to ride?

Gus: You’re saying I remind you of a circus monkey?

Maggie: Don’t look so offended, that’s high praise. He was smarter than most men I know.

Gus: Charming. [Clears throat] Let’s get to your um, vocation. As ringleader at the White City circus, your stature in this position is most unusual. Would you care to tell our listeners about it?

Maggie: Unusual? How’s that? Every circus I know has a ringleader, Gus.

Gus: Of course, I’m sure, but the position is mostly reserved for men, is it not?

Maggie: …I get it. [Sniffs] Much like your position as “Radio Speaker Guy”, huh?

Maggie: Then, I guess we’re just two anomalies to the rule, ain’t we?

Gus: W…w…why don’t you uh, tell us how you found your way into the circus?

Maggie: I got into it young. It seemed to suit my personality more so than school ever could. That and the elephants were nicer.

Gus: And… they just let you in?

Maggie: Believe it or not, Gus, they did. Circus folk are a welcoming bunch… until ya cross us. Then it’s a whole other story.

Gus: I don’t doubt it, Ms. Dyer. Tell me, what was your act when you joined?

Maggie: Oh, I didn’t have an act for a long time. Nah, it’s a long way from the bottom to the ringleader’s coat. I started in backroom detail. Cooking, cleaning, shovelling shit, all that nice stuff.

Gus: Please, watch your profanity Ms. Dyer. This is a live broadcast.

Maggie: Awh Christ, Gus. How much starch you eatin’ every day to keep ya this stiff?

Gus: [Clears throat] Moving on, how did you breakthrough to performance?

Maggie: Well I got a pretty dab hand with a knife from cutting all those carrots for so long, and one night some schmuck came snooping around our camp for God knows what. Yours truly pinned him to the latrine wall from ten feet. Presto, Dyer’s Wheel of Death made it to showtime.

Gus: That’s… quite a sensational story.

Maggie: You having a hard time swallowing it, Gus?

Gus:[Clears throat] Your story is very entertaining. I believe you are an entertainer through and through.

Maggie: Alright, how’s this for entertaining?

Gus: Ho now! Ms. Dyer, I don’t see why you’d feel it necessary to bring a knife to an interview.

Maggie: You kiddin’? In this city, you need to bring a knife everywhere.

Maggie: How’s this? Now I ain’t even looking.

Gus: [Raising voice] Please, before you take a finger off.

Maggie: Alright. You wanna do a boring interview, fine. Where were we?

Gus: I…I don’t quite recall. I wonder uh, what is it that makes your form of entertainment so attractive to city folk?

Maggie: People wanna be thrilled, Gus. This is just another way to do it. And it’s suitable for the whole family.

Gus: And what must your family make of it all?

Gus: Hardly what one would deem a conventional family. Tell me, do you ever think you’ll…settle down?

Dead air hiss, then Maggie can be heard mumbling off mic. It is barely audible but sounds like she says ‘Strike two’.

Maggie: Look, I’m a businesswoman first and foremost. Anything beyond that is irrelevant here.

Gus: Ah that’s right. I’m glad you brought this up, your ventures go beyond theater.

Maggie: That they do. I’m also heavily involved in… public relations around the city.

Gus: That’s what you call it, huh? Are you aware of some of the allegations made against you?

Maggie: Allegations are just that. I got nothin’ to hide, and I ain’t entertaining folks’ opinions and rumors about me.

Gus: This goes a long way beyond opinion, Ms. Dyer. Some of the accounts are uh, unsavory to say the least. They’d be of great concern to good citizens in this city if even an ounce of them are true. Allegations of violence, conspiracy to commit fraud… I even heard you linked to accounts of intimidation through the use of wild animals.

Maggie: [Sniffs] People sure do have crazy imaginations. Our animals ain’t wild, they do just what I say.

Gus: Perhaps you’d like to take the opportunity to set our good listeners straight?

Maggie: Look, this whole city is a goddamn circus. There’s wild animals and clowns everywhere. They’ll run riot without a ringleader like myself to keep everybody in check, cracking the whip, making sure it’s a smooth show. I don’t think that should be held against me.

Gus: That answer seems a little uh, rehearsed, Ms. Dyer. Am I not the first to raise such a public concern?

Maggie: [Sighs] Your wife get you that tie, Gus?

Gus: Uh, matter of fact she did.

Maggie: You got a little somethin’ on it. Let me just…

Gus: What the–[grunts] Let go of me[choking noise]–
More grunting sounds off mic, then a loud thud. Maggie can be heard laughing.

Gus: [Off mic and shouting] What is the meaning of this?

Maggie: Ladies and gentlemen, your stuffy presenter is a little tied down at the moment–

Gus: [Off mic] Pull the knife out at once.

Maggie: Pull it out yourself, I’m broadcasting here. As I was saying boys and girls, if you wanna witness more high brow entertainment like this, with your own eyes, get down to White City circus. Running shows four nights a week and two on Sunday.

Off mic grunting then a loud tearing sound.

Maggie: I did ya a favor.

Gus: Is this any way to conduct yourself in a live interview? [Heavy breathing] I brought you on here to promote your circus–

Maggie: Nah, you brought me on here to look down your nose at me and try to catch me out for something I’m accused of. I’m the one promoting my circus. Entertaining the masses, using you as a clown.

Gus: This is an outrage. [Heavy breathing] You have squandered your opportunity to–

Maggie: Ah save it. People know where to find me.

Gus: Ladies and gentlemen, [coughs] my sincere apologies. We will promptly go off air until this interruption is resolved. Do not adjust your sets, a weather report will follow.