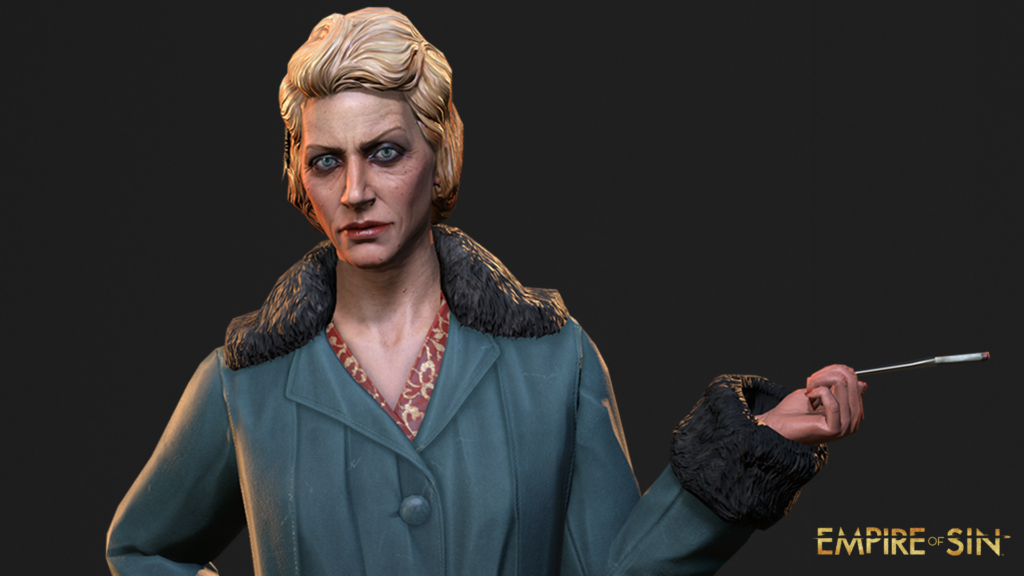 Depending on who you talk to, Mabel Ryley is as nice as pie or the woman who can cut someone to shreds with a single sentence. What else can you expect from a woman who sharpened her tongue on the whetstone of Cork city? She had a worthy criminal enterprise by the age of sixteen. She’s one of the few women the nuns tried and failed to fully reform. She’d earned the nickname “Sister of Merciless” before making her escape to America.

Chicago’s finest never really stood a chance in contending with her. The best they could hope for was an alliance. Sure, there were some growing pains, a few felonies and misdemeanours when she first landed stateside, but these she just put down to experience in a new country. She wears her record like a badge of honour; the mistakes she’ll only make once.

What most gangsters don’t realize is that any deal with Mabel always ends up with her coming out on top. If there’s one thing the convent taught her, besides how to take a beating, it’s telling people what they want to hear, while working on your own scheme behind the scenes. It was a trait that impressed the Alley Cats street gang, whose earnings tripled when enlisting Mabel’s sweet but vicious dichotomy. Mabel lives in a person’s blindside, draws them in with charm and then cuts them when they’re close enough.

She and the Alley Cats leader Dave, were a powerhouse duo in illegal enterprise, and they fell in love quickly — or rather, he did and she let him. Theirs was a marriage that raised questions on its legitimacy while at the same time raising both their standings in power. The latter being of no concern to Mabel in her expedition to the top of Chicago’s underworld.

It’s Dave’s death then, that has people questioning this: how deep does Mabel’s desire to look after number one go? Victims of her quick mouth are certainly ones to believe she is just callous enough to have a hand in it. The only sure thing is, when it comes to picking sides, her’s is still the smarter one to choose.

Police interview with Mabel Ryley following the homicide of her husband 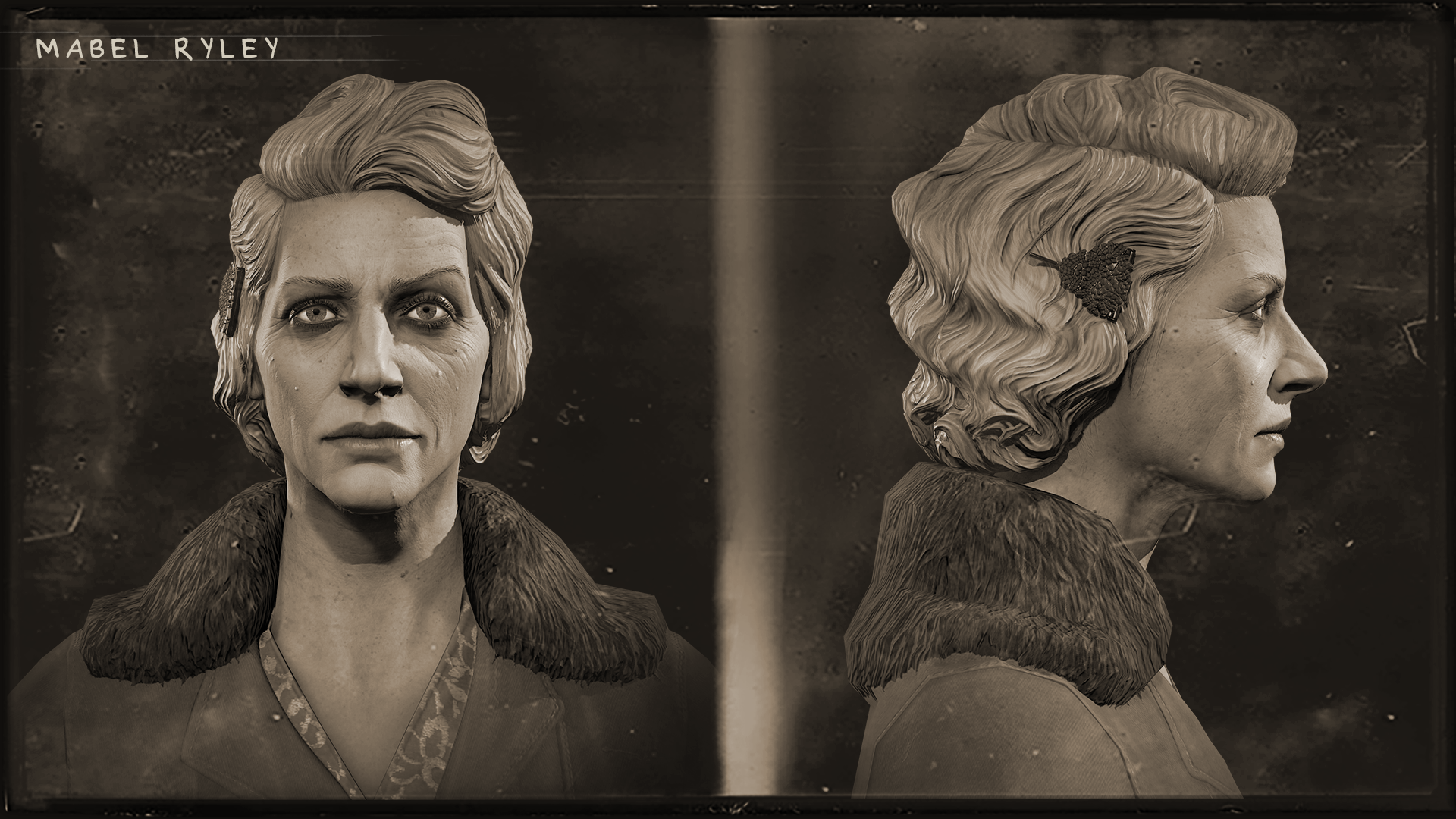 Geary:  Today is January 12th 1920. It is currently 11:38.  My name is Detective James Geary, also present is Sergeant Sean Finnerty. We are talking to Mrs. Mabel Ryley of Little Italy, Chicago in relation to a homicide that occurred at 142 Junction and Main on the night of January 10th 1920. Now uh…that’s Ryley with an R-Y, not R-I right?

Geary: So I thought. Well, you certainly have quite a history with law enforcement.

Ryley: [Laughs] That’s all a past life, mostly forgotten now.

Finnerty: Yeah, it took two of us to carry your list of priors in here with us.

Ryley: A list that ended a good few years ago now.

Finnerty: Uh-huh. Or you just got better at covering your tracks. Let’s see, uh, Aggravated assault-

Ryley: That one was self defence.

Ryley: Nah, I just got locked out of where I was staying.

Ryley: [Coughs] What can I say? I used have a hot temper, and when I first got here I needed… Finances. I’d no job sure.

Geary: Either way, Mrs. Ryley, you seem familiar with the formalities of this situation. Why don’t you tell us: what is your relationship to the deceased?

Ryley: He is…was, my husband.

Geary: And his line of work?

Ryley: He was a businessman.

Geary: What sort of business?

Geary: Of what exactly?

Ryley: Oh, nothing glamorous. Whatever sundries that folks around here are in the market for.

Geary: Can you be more specific?

Ryley: My husband didn’t feel the need to share the details with me.

Ryley: I never felt the need to ask.

Finnerty: Once there was money rolling in, that was talk enough huh?

Ryley: Business is business like, it has no place in the home.

Geary: [Sighs] Alright Mrs. Ryley. Why don’t you take us through the events of the night in question.

Ryley: My husband died in a car bombing. I figured you knew that already?

Geary: Right. Why don’t you talk us through your evening.

Ryley: Alright, well emm… we ate dinner and afterward, Dave stepped out. To meet a client I think.

Geary: What time did he go out?

Finnerty: You don’t see that as a little out of the ordinary? Your husband, out for business, on a Saturday night?

Ryley: No, not if it’s somewhat informal. It’s not uncommon to meet clients in emm…social settings.

Finnerty: Well, it all sounds like fun and games. Maybe I should start my own business.

Ryley: I don’t think you’ve the head for it, Sergeant.

Geary: [Sighs] Tell me, when he left, did he seem any way uh… out of character to you?

Ryley: Not that he had much to begin with now, but no, he seemed his usual self.

Finnerty: And he drove himself when he left?

Ryley: How else would his car end up where he was?

Finnerty: Mrs. Ryley, I find your attitude towards me lacking.

Ryley: I was about to say the same about your detective work.

Geary: [Raising his voice] Can it, the both of ya! This is an investigation into the homicide of your husband, Mrs. Ryley. We expect you to respect that.

Geary: Okay. Now. What did you do after your husband left?

Ryley:  There were some leftovers…em from dinner, so I decided to bring them over to Shirley.

Geary: And what time was this?

Geary: Seems late, for an old lady to be eating dinner.

Ryley: I never said she ate it. She hardly ever touches my cooking.

Finnerty: So why bring it to her?

Ryley: Because it’s a nice thing to do. And she’s a proud woman who lives alone. It’s an excuse to call around.

Geary: You two are friends, huh?

Geary: And you walked there?

Ryley: You find that hard to believe, Sergeant?

Finnerty: Oh, there’s plenty about this case I find hard to believe.

Geary: The Doormen at both buildings can vouch for Mrs. Ryley’s late night stroll, Finnerty.

Finnerty: A doorman will see a pink talking camel, if you pay ’em enough. And you’re a rich woman, ain’t ya Mrs. Ryley?

Ryley: I don’t see how my personal finances are relevant to your investigation, Sergeant.

Geary: [Coughs] How long did you spend there, at uh Shirley’s?

Ryley: Let me see, I got back just before 11. So almost two hours.

Geary: This is typical of your visits?

Ryley: On Saturdays? Yes. She goes to Mass then. She has a lot to say afterward.

Finnerty: About the word of God, huh?

Geary: Uh-huh. Well, Shirley does testify as to your whereabouts between those hours. She also says you and your husband fought a lot, that you were quick to point out his faults.

Ryley: Not quite as quick as her.

Ryley: I think her outlook is true for most mothers in law.

Ryley: What was the last nice thing your mother said about your wife, Sergeant?

Geary: Let’s get back to the night in question here. Uh, the nature of your husband’s death. It’s not a crime of passion. A car bomb is a professional hit, meticulously planned.

Ryley: Is there a question here, Detective?

Finnerty: Did your husband have any enemies? Anyone who might want him dead?

Ryley: Dave was a hard man to get along with. He’s like his mother that way. But I can’t think of anyone moved enough to kill him.

Geary: Uh-huh, what do you know about the Alley Cats, Mrs. Ryley?

Ryley: I know not to feed them lest they come howling at your door every morning.

Ryley: I left my past behind me, Sergeant.

Geary: Dave’s business associates, we believe they are operating as a gang known as the Alley Cats.

Ryley: First I heard of it.

Geary: Do you know his associates?

Ryley: Of course. First name terms with most of ’em.

Geary: Did they ever tell you about their or your husband’s activities?

Ryley: Nothing I didn’t already know.

Ryley: That my husband was in the business of imports and exports and he’s a hard man to get along with.

Ryley: I’m sorry…I wish I had more I could tell you. But I know as little as you do.

Geary: Alright, cool it Finnerty. I think we’ll adjourn for now. Mrs. Ryley, we’ll be in touch when we have further questions. It’s 12:00.