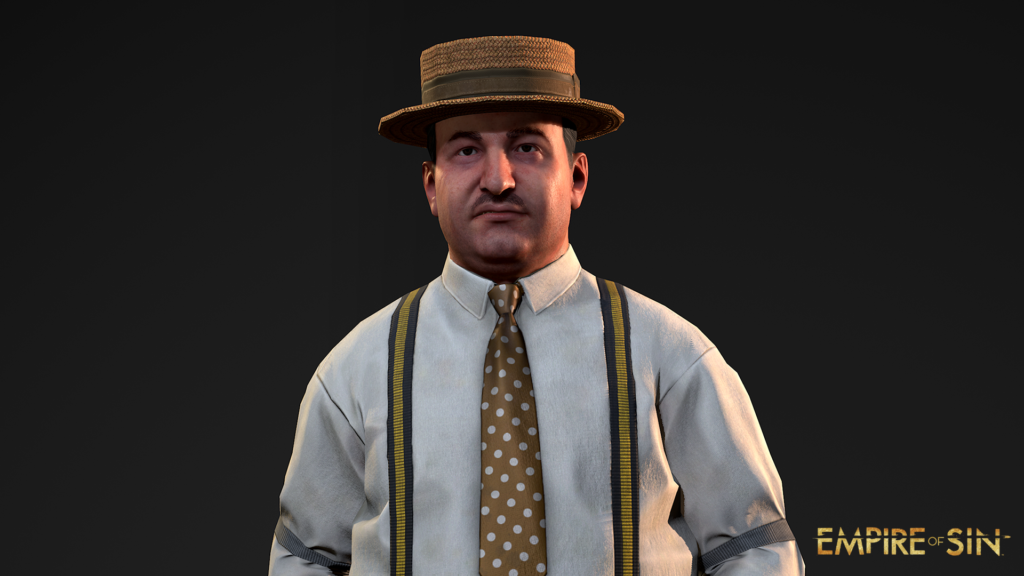 Joseph Saltis is the middle child of Chicago’s underworld; he gets along with everybody, acts as a good mediator between gangland relationships, and no one pays close enough attention to him to realise he’s playing them all off each other to further his own standing in the crime game. Joe’s a diplomat, and a popular one at that, the kind of popular that almost renames a whole town to ‘Saltisville’ by popular vote, losing out by just one count – true story.

There’s plenty of money to be made in prohibition if you own a couple of speakeasies, but what good is a bar without hooch? That’s where Saltis comes in. He’s the main supplier to countless establishments around the South Side. He runs a huge, lucrative operation distributing booze from the Back Of The Yards neighborhood in Chicago. His business acumen is finely tuned, and beyond aiming to be the monopolising supplier of liquor, Saltis also knows who to acquaint himself with. Enter John O’ Berta, close friend of Saltis and contending candidate for a seat in Illinois state senate. Now, as well as a booming enterprise, Joe also has a sway in turning many a blind eye to his activities as well as the leverage that having a political friend evokes.

Saltis has the stature around the South Side to be the only real contender with that wild animal Capone. The two remain on good terms despite the fact that Saltis’ business is the only one to remain independently run, and out of the control of eight other satellite gangs that work under ‘Scarface’. That takes a certain amount of charm and prowess; working the same territory as public enemy number one and still managing to call him ‘friend’, at least loosely.

It may have something to do with the fact that Saltis is a product of his home nation. He was born in Budapest, Hungary, a country with one of the most violent history’s in Europe, in terms of defending itself against powerful men fighting to take control of it. Beyond that, it could also be his physical size. As the saying goes, they don’t make ’em like Joe anymore. The man is a hulk, tall as he is wide, and who really wants to go up against a man with hands like shovels? One thing is for sure, with paws like that, Joe is more than equipped to grab the biggest handful of Chicago to call his own. 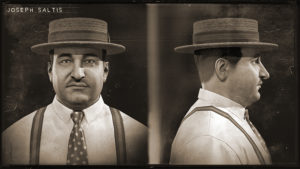 The following letters are evidence garnered from three separate raids on the city’s suspected crime bosses. These letters have been grouped together as one exhibit as they share one common denominator: Joseph Saltis. There are no dates on any of the letters, though we suspect them to be linked to the infamous South Side brawl of April last. The letters are described as follows;

I hear things on the South Side are going your way of late. That seems to be a mighty operation you got going over there. There’s not many that can keep Scarface on his good side but you seem to be managing alright. There sure as shit ain’t anybody on North Side that can say the same. Now, I’m telling you this cause I like you, J, and I like your business – Scarface is a lit fuse. Sure, you may have dampened it, slowed it the burn a little, but that don’t mean he ain’t gonna blow some day. When that happens – cause it will happen J – you’re gonna be left bleeding, without a damn dollar or racket to call your own.

That’s why I say, get ahead of the game. Act before you react, J. I’d be willing to help you too, that’s just how nice a guy I am. I can connect you with some good rackets up here to supply to, for a cut of course – ain’t nothing for free J, you understanding me? And listen, if you’re worrying about that stick of dynamite finding out, don’t. Alls he needs is some distraction so he don’t notice our little merger, and I got plenty of guys willing to go down there and distract some South Side guys for half a dime. I’m talking fucking hypnosis by fire. You picking up what I’m putting down here, J?

Come find me, I’ll be waiting. Ain’t no reason to turn your back on good business, J. You know that better than anyone.

Perhaps I should thank you for your interest and admiration in how I run my operations. My enterprises are always successful, because I make it so, and it’s nice to be recognized for that, I am deeply flattered. This vocation of ours is a business, and I am a businessman first. That is the key to running operations as lucrative as mine. There is no room for sentimentality; blood is just another currency.

If I may speak frankly, you think you’re the only one to see the true nature of my contemporaries from your perch on the North Side? Let me tell you, I am well aware of the volatile nature of my competitor and regarding our competition; I don’t need anyone to tell me what I can quite plainly see for myself. What I see here, is an offer of business from you. As I said, business comes first with me. I’d be more than happy to hold a meeting with you to discuss this further – and as good business requires quick action, what say we arrange this for the coming week? Now, it must go without saying that we must treat this as a covert operation. If anyone on the South Side catches wind of this, it’s me in the cold earth and you without a good supply – so keep your mouth sealed.

As for Scarface, I got plenty of guys that are up for the challenge on any move he makes, but in the interest of distraction, perhaps it is best to send guys he is not used to seeing. I say send your guys on down and we’ll see how he deals with that. I’ll be in your neighborhood next week, so plan your distraction for then.
Finally, the next time you write me a letter that is not in coherent english, I’ll burn it before I get through the first sentence. You are a businessman, you should speak and write like one. I’m not even a native speaker and I put you to shame, for Christ’s sake.

Until next week,
J.

I hope this finds you well, your wife and kid too. You are a busy man, as am I, so I’ll get right to the point. Don’t ask me how I know, but I have it in good faith that there’s going to be some moves made upon your racket by North Side opportunists, sometime in the next week.

It’s more than a hunch, A, you know the connections I have, and the vat of information I am privy to. Keep your guard up comrade; show them how things operate on the South Side. Just remember, you didn’t hear this from me.

Thanks for your letter. The family is in good health and I will no doubt be in good spirits after I capitalise on your generous tip off.

I appreciate you getting in touch to let me know of some impending threat. Just another example of how South Side looks after their own. Plenty of room for the both of us here, eh? I’ll be tripling fortifications around my joints. And I don’t want you worrying about your friend Big A here; I’ll have my pet Mr. Thompson ready to bark at any postmen that come barging in here unannounced.

Keep your eye on the papers,
A.