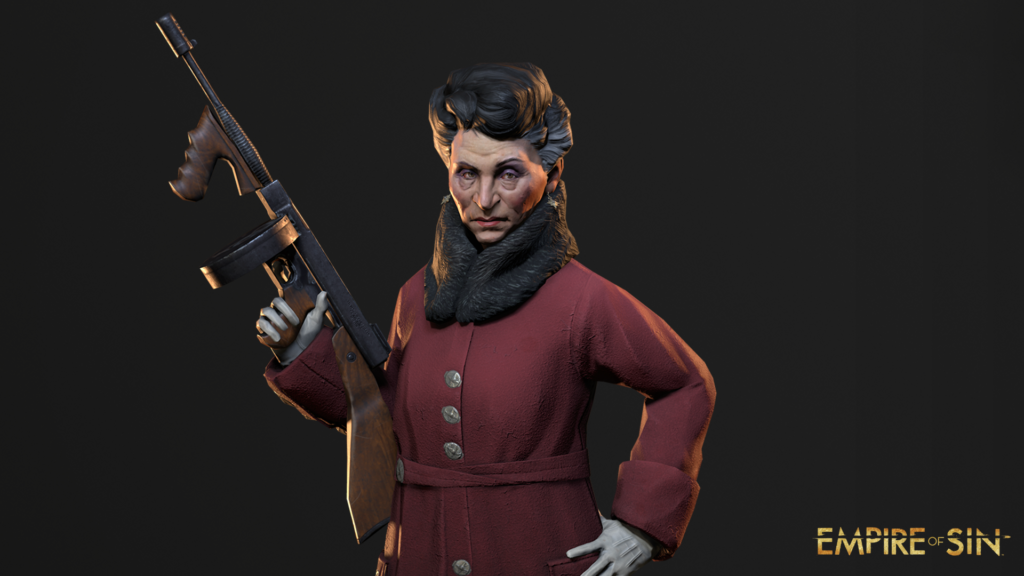 Elvira Duarte has achieved what few others in her profession have managed to do: live into old age and still remain an active member of a criminal empire. She’s not some periphery player either, leeching in the shadows of younger, bigger fish. She’s a ruthless, tenacious gang leader bent on claiming more stake in Chicago’s fortune than any of the pissants half her age.

A whole life lived before coming to Chicago, Duarte began her life in crime in her native Mexico. She had a natural flair for the business and an unforgiving attitude toward challengers to her regime. Working her way up the ranks, she became a gang leader before setting her sights on a better, more fruitful life for her and her sons in Chicago. She upped sticks and came to the windy city to start all over again. It didn’t take her long to get the lay of the land. Using her skill and experience, she muscled her way into the best of the city’s profits. Naturally, she made her way back to the position that fits her so well: gang leader of Los Luceros. Elvira came from nothing, twice, and carved a path to criminal royalty. Providing where she can, she guides her gang using her work ethic. She demands they be as resilient and bull-headed as her, instilling extreme loyalty and confidence among her followers.

At a glance, there are many who would depreciate Elvira to a frail old timer. This is their mistake, and one she plays to her advantage when the opportunity arises. This long in the game, Elvira is under no illusion as to what it takes to get what’s desired. She is neither phased nor deterred by the prospect of breaking bones, or ending lives to further her own end in this wild city. What some call callousness, she calls business. Jaded to the pleas and bargaining of condemned enemies, if she doesn’t get what she’s looking for on first request, she doesn’t think twice about pulling the trigger. She has plenty of heavies to clean up the mess afterward.

Elvira has outlived countless other gang lords who have fancied themselves kingpins of the city through their schemes and ventures. The demise of each one has given her knowledge and experience of how not to do things. She can smell lies, betrayal, and ambitious ego under the best poker faces. There is no scam, backhanded deal, or mutiny she hasn’t heard of – or used herself in the past. She’s already four steps ahead of those considering the idea of attacking her domain.

After a lifetime of cunning and violence, backed up by a gang of stone hearted trigger fingers, it shouldn’t be long before she sees herself as sole ruler of Chicago. 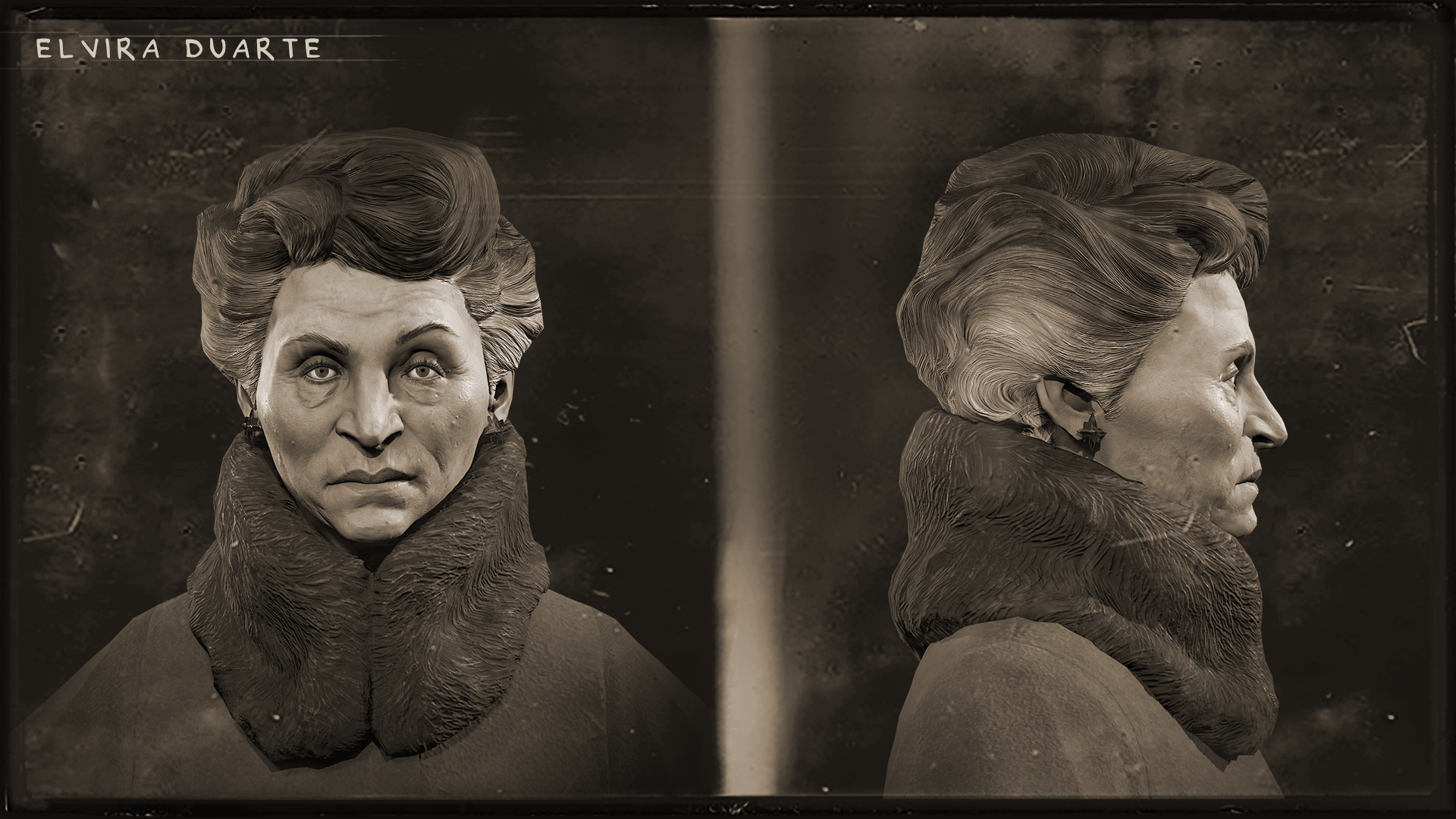 Raul, the adopted son of Elvira sent a letter to his relatives in Mexico to learn more about his mother and her roots. This is the translation of the response he received from his Tia Yoly.

Raul, this is what I remember about my sister Elvira: she was a very proud woman, hard and strong. She was so rigid and tough; the only person I was ever afraid of. Elvira was a business woman and did not put up with any weakness from anyone. She raised her family during very hard times and had to do whatever she had to do to make ends meet.

Tough as she was, she always paid it forward. Elvira helped so many people throughout her time in Hermosillo. Everywhere she went around here, she was well known. Police, professionals and other locals would always say hello to her. She raised her family the only way she knew how to.

I don’t know when or how we came to get into the business we did, but we did. With the help of your Tios and I, she decided on brothels. They were combined with bars and restaurants. They were named ‘Waikiki’, the ‘B-21’, and the other one…I don’t remember the name.

Your Tios were all bartenders, and we all helped out. Elvira had a friend at one time who couldn’t take care of her child, and asked Elvira to raise him. That child was you, Raul, and she raised you as her own. As you know, Mama Elvira was very strict with her children. Josephina, your sister, rebelled when you were still a baby. She ran away to Los Angeles. The last I heard she became a nurse.

Elvira used to always help the poor and took in children. At one time she probably had around thirty. I always remember having new nephews and nieces to meet.

Once, she won a quarter of a million pesos in a lottery. After that, she had a little chapel built across the street from our family house. She opened a second-hand store in Hermosillo, and she would help many people get back on their feet. All in all, Elvira was an extraordinary, tough, hard working person in our life. She did what she had to do to support her family in tough, unapologetic times. She wouldn’t stand for weakness.

I loved her but was always afraid of her. After she got a hardening of her arteries in the back of her neck, she ate rattlesnake meat. She heard it was a good remedy. She would pay a man to collect some snakes, and she would blend the meat up and eat it. She claimed that it helped. I remember attending our business meetings, sitting across the table from her as she chewed on it. I do not know how she is managing now. I imagine there are fewer rattlesnakes in Chicago.

Her house is still here. Someday you must come to see it. I have her wedding picture if you want me to send it to you. I hope you guys are safe and well.

Take care of yourself mijito, love you.
Aunt Yoly.

P.S.: If you ever want to find out about Grandpa, who was a revolutionary soldier and fought with Pancho Villa, get in touch with Tio Donny. He knows all about it.

A translation of a letter written by Elvira when she left Mexico. The letter is addressed to the Madam of one of her operations.

I leave the houses under your control for now. You have proven yourself ready. I always told you – never be sentimental. Here is a case in point. My life in Mexico has reached a hiatus, and I have no time nor like for goodbyes. I have made my choice. It is time to bring our operation elsewhere. What I have achieved here is my greatest pride. Now I will expand across the border, to capitalise on the affluence of foreign soil. Chicago seems the right place to spread our influence.

In a way, I am back to my roots, which will be good for me. The easy life can become boring, I need the challenge. I need hard people who can make hard choices, adept to the values of real work. That is what our business runs on. For this reason, I’m leaving with no more than I require and a loaded pistol. Whatever is left in our house, the safe, my office, is yours to manage. Spend it, invest it, build upon our empire.

I once considered retiring to what my mama would call “a decent life,” but thought better of it. I have acquired too much knowledge over our years here to squander it on honest living. The old ways are best, and our business model will translate well in America. Real money is rooted in the thrill, desire and false hope of common people, not the work of respectable professions. Remember that, tailor the house toward it, and we will have an operation that spans two nations.

I am leaving swiftly, without warning, so we can avoid your teary farewell. Life is hard, and you need to harden to it. Now take what I taught you and continue the empire. I will do the same in Chicago, bring our business to people who know no better. They will have their eyes opened and their pockets emptied, and I will build another fortune with the help of my sons.