Good business is about making your own opportunity and acting quickly on it. At least, that’s what Dean O’ Banion thinks, when he spots a whiskey truck stopped at a red light and decides to rob it single handedly. He has the entire load sold twenty minutes later.

That’s the type of attitude befitting a man who grew up hard, on the streets of a place called “Little Hell”. As the name suggests it relies on stealing and debauchery as its daily economy. For a hell dweller though, Dean doesn’t see himself as a devil. In fact the front he presents to the public is the exact opposite. He’s at Mass every Sunday and one of his closest friends is the parish priest, Fr. Higgins.

He also runs a flower shop in the heart of Chicago. It’s the perfect front; who would suspect the friendly man in the florists would have a backroom set aside for shadier dealings? The flower shop is the top choice for most mob funerals, which means Dean can drum up business for one enterprise, by unleashing a little hell of his own through his other vocation. It’s win win. Running rackets with street gangs in his youth has really paid off. Dean has perfected the art of double ended enterprise, making money hand over bloody fist.

Dean is a natural talker. Perhaps it’s his Irish roots, but he can talk his way into the best parts of a deal before the other party even knows what they’re agreeing to. He’s got connections that run far and wide and even though Chicago’s North Side is his usual stomping ground, Dean has aspirations, as well as guts to go after a wider territory. He may have come from nothing, but that doesn’t mean he has to stay there, or be satisfied with the little bit of the city that’s already under his heel. As any good business person knows, you’ve got to expand to survive, and Dean is prepared to supply more flowers to more funerals in order to tighten his grip around the entire city of Chicago. 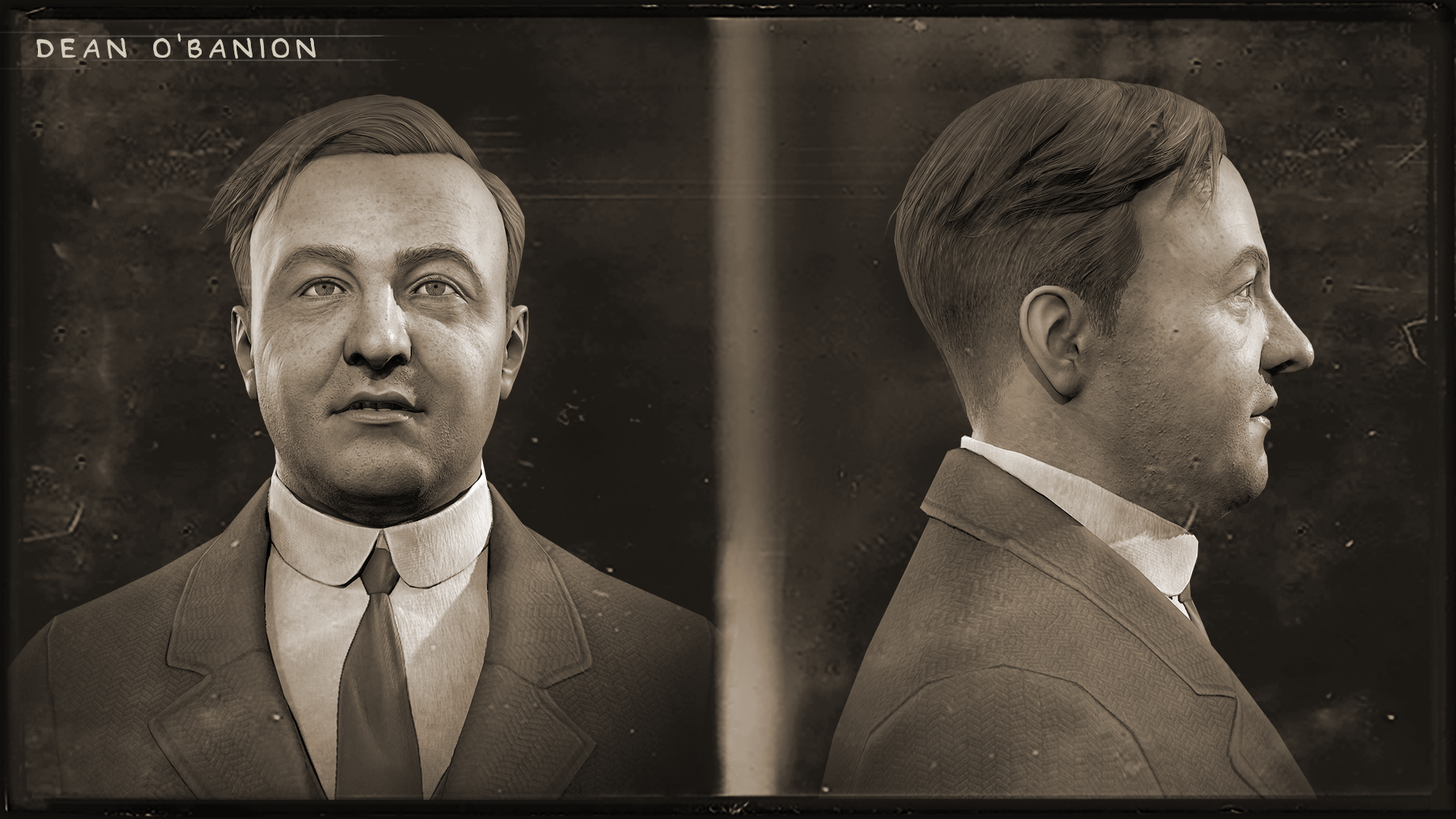 The following transcript is a verbatim exchange between Dean O’ Banion and his second in command George Clarence “Bugs” Moran. The audio signal was captured via a dictograph planted by an undercover officer; in Schofield’s [Mr. O’ Banion’s flower shop], on 736 North State st., Chicago.

Muffled voice sounds in the distance.

Background noise and footsteps can be heard, growing louder. A man clears his throat.

Moran:I stopped by our friend O’Sullivan’s on my way here. I got thirsty.

O’Banion: Explains why ya so loose.

Moran:Ah Save ya ‘holier than thou’ shit for Higgins, c’mon!

O’Banion:Ey! Ain’t nothin’ wrong with tryin’ to follow the Lord’s word outside a church y’know.

Moran:[Lowering voice] Only when it suits ya.

O’Banion: Did ya tell him what I told ya to?

Moran: Yup. I mean it took a little while…but he got the message, eventually.

O’Banion: You sure? He didn’t…fall asleep on ya did he?

Moran: Nah, he was singing his understandin’ when I got to leaving.

O’Banion: Good. Good! [Clap sound] Shouldn’t be any issues with payments then. Now, about later

O’Banion: Oh, hiya Frankie! What can I do ya for?

Frankie: [Breathless] Fella’s, ya gotta help me. It’s an emergency, I need somethin’ for the lady.

Moran: [Laughs] You in the doghouse again, Frankie?

Moran: Let me guess, caught in ‘Dark Desires’ with ya pants down?

O’Banion: Better fuckin’ not be, else I won’t be servin’ ya! This ain’t no shop for brothel rats.

Frankie: Nah, Nah it ain’t like that, it’s fuckin’ Valentine’s day. I went and forgot it…again.

Frankie: Second year runnin’. I swear to God, this fuckin’ holiday. One of these years it’s gonna get me shot!

O’Banion: So ya need flowers?

Frankie: What? What’s so funny?

O’Banion: Lemme ask ya somethin’: How much do ya love ya lady?

Moran: It’s a simple fuckin’ question. Do ya love her or is she somethin’ that just uh…tags along?

Frankie: She’s the love of my life.

O’Banion: Alright. Well, half a dozen roses ain’t gonna cut it then.

Moran: Yeah, that’s what ya get for the tag along, when ya remember the fuckin’ day.

O’Banion: What you need is a far…grander gesture of your love.

Moran: That’s a beauty. Say Dean, does the vase come with that bouquet.

O’Banion: Indeed it does, Bugs. Wouldya look how fuckin’ white that Tibet is, huh?

Moran: Lemme tell ya Frankie; ya bring that home to the lady, she won’t just say she forgives ya, she’ll show ya how much she does.

O’Banion: Ah…Don’t worry about it.

O’Banion: Look, right before ya came in here, Bugs and I were talkin’ about some work we gotta do. I tell ya what, you go along with Bugs later and this bouquet is all yours…no charge.

Frankie: Really? What kinda work is it?

O’Banion: There’ll be cash payment too, so ya can buy something extra for the lady to go with the bouquet.

Moran: Sounds good to me, Frankie. You get the lady a nice piece of jewelry, you won’t have to remember Valentine’s day ever again.

Moran: Ah, bring him too. Could always do with more muscle.

Frankie: Alright, I’ll tell him. Hey, thanks Dean, ya really helped me out here.

Moran:[Raising voice] And tell ya brother!

Moran: Well, that was a freebie.

O’Banion:Nah, Bugs. That was God. I’m tellin’ ya, I don’t pray every day for nothin’.

Moran: Sure it was. Say, I’m starvin’. Ya wanna get somethin’ to eat?

O’Banion:Nah, I got orders to do here.

Moran: Alright. I’ll be back later.

This morning’s confessions have left me troubled, young Dean O’ Banion came to me. His confessions grow darker by the week, I would swear it. I believe he thinks I do not know it is him, and thus lays all bare, but I’ve known that voice for so many years now, it is hard to misplace. Besides, he always catches himself about to curse and sure that’s a dead give away. I’ve never known a mouth as filthy as his.

He is in peril of finding grave danger for himself. He is carrying around a loaded shotgun with him everywhere. It seems he is getting more bold with each new sting he pulls off. ‘Business ventures’ he calls them. The latest ‘venture’ was holding a driver at gunpoint and stealing a truck filled with alcohol. I fear this is how he sources our wine for mass, but I dare not ask. Sometimes we’re better off not knowing these things. ‘Ask no questions tell no lies’, as Dean himself is fond of saying. Just last week he confessed to beating someone senseless in the back of his shop. Worse still, he showed no remorse. In fact, he chastised the man for bleeding on a rhododendron display he was working on.

There have been inklings to this carry on for as long as I have known him. Running with the “Little Hell gang”, shoplifting, mugging the people he’d spiked with a Mickey Finn. What hope had he really? Losing his mother at such a young age, and growing up in that hell Kilgubbin with his father and brother, surely had an effect on the boys’ upbringing. He had no maternal influence to deter him from delinquency.

I did my best Lord, I hope you know. I still do. I groomed him, showed him your love and he was accepting of it. He sang your praises with that beautiful tenor voice in the church choir. Then I learned he used that voice to distract patrons in restaurants whilst his friends robbed the coatroom. Should it really be held against him if he used the gifts you bestowed unto him to further his way in the world? He was a poor boy Lord, it drove him into business, something he has a natural flair for. He and his friend Bugs Moran. They are a bad influence on each other, but they are as thick as thieves. Inseparable since their days of slugging for the city’s newspapers.

In truth it is not his soul I worry for, more his safety. He is a sensitive boy underneath it all. His love of singing, his passion for flowers and he still repents, aware of his own misgivings. He’s in mass almost every Sunday, confessions a few times a week, and takes his penance seriously. I can’t help but wonder what kind of man he would be, were his mother still alive…

Ah! But I see Lord, taking her was your will, of course, and your will has made him the man he is today. He is the result of the hard city that shaped him, such an outcome has branded him a success in the world he dabbles in. Even the strongest of your flock, Lord, can be tempted by the devil’s vices. I should know, and for that I beg forgiveness. The point is that we are trying, daily, to be worthy of your love, Dean O’ Banion more than anyone. He is a good Catholic who I have well versed in your word. That is more than I could have hoped for I suppose.