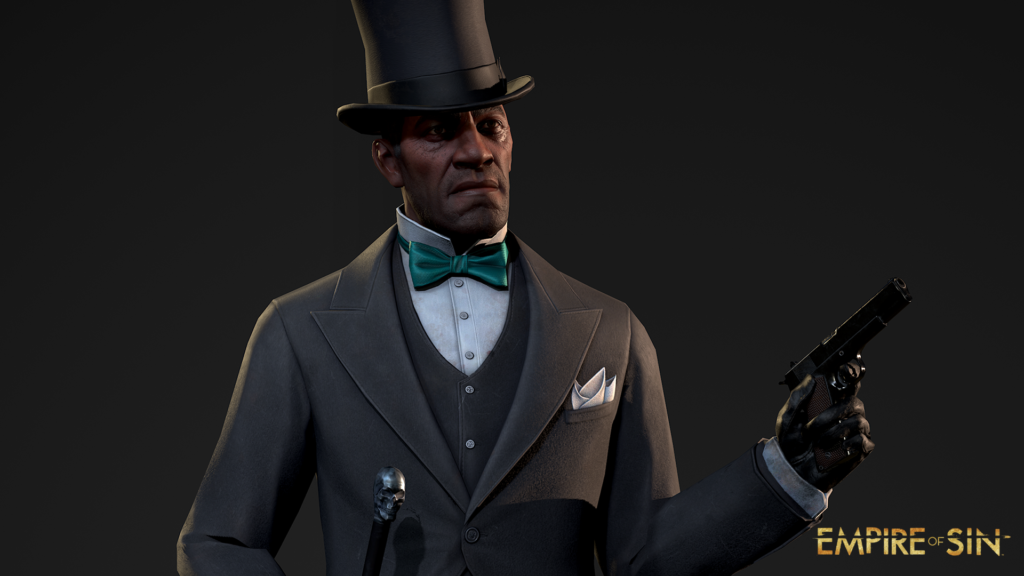 Daniel McKee Jackson was a mortician from Pennsylvania who arrived in Chicago to start a funeral parlor with his family. A born humanitarian, Jackson has the needs of the downtrodden close to his heart. However, this doesn’t stop him from capitalizing on their natural inclination toward vice. When it comes down to choosing between Daniel the Businessman or Daniel the Humanitarian, what will he decide?

Is it better to be respected or feared? Daniel McKee Jackson asks, “Why not both?” Ambition and natural charm reflect his high society standing. The mayor of Chicago is on his list of acquaintances. For that he is revered, and the rumors of just what it took to get him there are reasons enough not to look him in the eye on the street. Let’s just say he’s ruthless when it comes to getting ahead in business. Still, if he gets things done for his community, who are they to ask questions? In his eyes, good intentions, like morals, are a matter of nuance. Jackson is of the opinion that the greater good should be achieved by any means necessary, and that leaves a reputation that’s not so squeaky clean.

It’s no surprise that Jackson has garnered some enemies on his way to the top. Running rackets out in the open with huge crowds, is sure to breed some jealousy in other bosses, but Jackson is a man of the people, and he lives to give them what they desire. Operating vices with such audacity is just another by-product of ingenuity and having well established friends. Others draw ire from the apparent hypocrisy between “Dan Jackson: the humanitarian”, and “Dan Jackson: the man willing to trade lives for power.”

Yet, the honorable Mr. Jackson makes no secret of his double life. He hides both in plain sight. He just requires one to be shrewd, like he is, in noticing such things. On the surface he is every bit the distinguished gentleman he would have you believe, but a closer look reveals a vicious side. Be it a threat disguised in eloquent conversation or the skull that decorates the top of his cane, something about him trumpets the macabre.

See, Jackson deals in death on a daily basis, through the legitimate enterprise of his funeral parlour, or by hand via far more questionable business ventures. The success of the former is, in part, due to the proficiency with how he deals with the latter. Here is a man who is in the business of burying evidence, and the doors never stop swinging. What could be more frightening than a man who can cut down any threat of competition and then file it in his tax return? Well, a man who can add the adulation of his peers and community to that reputation, too. Daniel McKee Jackson holds both those cards, and there’s not many bold enough to bet against that. 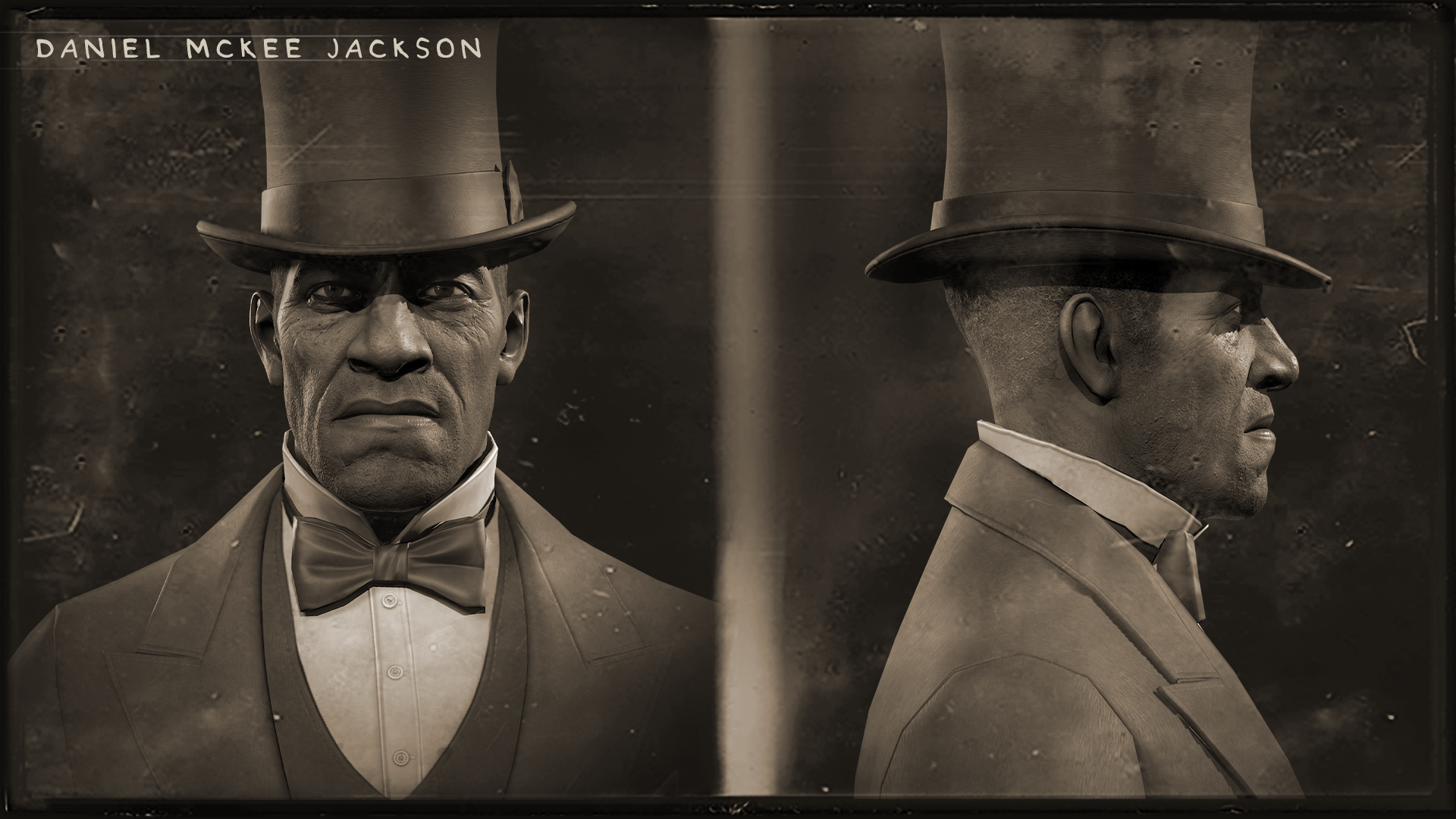 Letters found during a raid of Mr. Daniel McKee Jackson’s office at his funeral parlor on March 23, 1923. Items:

Your letter was cordially received and came across my desk via special delivery this morning. This stands to show that you are indeed passionate in presenting your most noble self. That being said sir, this letter and its attached manifesto cannot be published in this newspaper.

This is both a democratic, and in truth, a personal decision. Your reputation does indeed precede you, and though I respect that you have spent years in building your name by working for the rights of the people of this city, there are clear indications that you achieved all you have achieved most unjustly.

Simply put, Mr. Jackson, your ties to the criminal underworld are too tightly bound to leave any mystery as to your stance on civil decency. If we are to speak plainly, momentarily, I can appreciate that results of the ventures you have engaged in, no doubt speak for themselves, however, the means by which they were achieved are, to put it lightly, grisly.

Mr. Jackson, you may dismiss these ‘means’ as hearsay or rumour, but public records, documenting certain cases of criminal activity, mention you by name. Though officially, you have still managed to elude any kind of reprimand in these cases, they nonetheless hold weight to a certain stance. A stance that this honest and decent newspaper cannot be shown to uphold.

It is for this alone that we cannot print your manifesto for publication. Speaking gentleman to gentlemen, any further attempts of unconventional nature that are made to sway my decision, would only prove my point on the aforementioned rumors. Someone of your honorable upstanding, Mr. Jackson, can surely understand why that will not be necessary.

Sincerely,
The Editor.
The Chicago News.

Editor, The Chicago News;
The discussion of the current economic prosperity of the second ward as well as the reputation that precedes me, are in my opinion, under constant scrutiny of late. The intent by which I run business is never anything less than for the good of Chicago and indeed its people.

Attempts have been made to soil my name and social standing. The reputation that I have built, to a point of well-regarded decency, has been tarnished by ill-meaning contemporaries of mine. I hereby submit to you, for print in your publication, a manifesto that presents the truth of my motivations. It is in my hope that hearsay regarding the operations of my daily business are written off as just that, hearsay!

In short, I strive to achieve through my work the very best for the future of this good city. This manifesto confounds that point.

The Manifesto of Daniel McKee Jackson

1: The pursuit of lucrative enterprise is to be made possible by the election of William Hale Thompson as mayor and co-operation is possible by your vote.

2: The continuation of such enterprises within this jurisdiction will require an upkeep toll that will be paid directly to associates of the Jackson enterprise.

3: This toll will aid as a contribution to the further ambitions of the campaign to improve the standard of living for the good civilians of Chicago’s second ward.

4: Adherence to the above will mean Policy banking by means of the Tia Juana wheel will be available for all Chicagoans in the second ward area.

5: The Broad Ax only serves to rally against our business ventures and are too vile to occupy a place in the toilet room.

6: I work in the interest of legitimate business for the growth and prosperity of this good city. To provide an acceptable standard of living for all in the community, irregardless of creed or background, and to sustain that standard for all future generations.

7: The Chicago News attempts to soil this agenda. Their interests do not lie in the growth of the local economy or the independent enterprises that work tirelessly for the betterment of Chicago. They nor anybody else will ever stop my handbooks from operating.

8: The Jackson owned funeral directory, will work to ensure the most modern of funeral industry standards are met. A directory that has been family owned for two generations insists upon the highest requirements for maintaining the dignity of our communities deceased.

9: Every person has the right to the decency of burial and their surviving estate permitted to an honourable service to pay respects and mourn their deceased. The Metropolitan Funeral System Association (MFSA), has been set up in the interest of providing funerals for low income families.