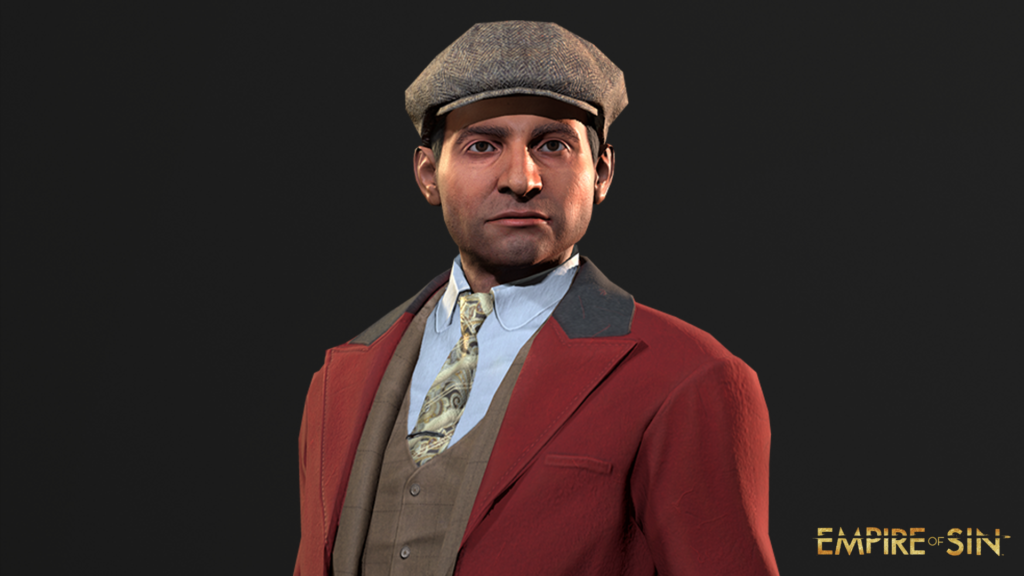 Angelo Genna is a real gangster’s gangster. Sicilian born, he came to Chicago with all the darkness and superstition that comes with the reputation of the island. It’s not far-fetched to say he’s feared amongst some of Chicago’s most aggressive businessmen. Genna sees it as great leverage to capitalize on, furthering his own business prospects. Local tryhards could learn a few things from Angelo on how best to take advantage of a booming underworld enterprise.

A stone-cold professional, business is first for Angelo, though he’s not afraid to cut down competition when the need arises. He didn’t get the nickname “Bloody” Angelo for being forgiving in business. A bad meeting with Angelo and his brothers doesn’t just mean closing shop. It means a messy death, too.

Genna has been leading and delegating since he was born. A typical middle child, he’s the negotiator between his five brothers and knows how to get the best out of each of their special talents. Having spent most of his life perfecting that skill, running the family business comes as second nature to him, and he is adept at getting what is best for his family from any business deal.

For him, blood is thicker than water and liquor is thicker again. Angelo is extremely loyal to his family and to those he has a professional relationship with. It works both ways, though, and he expects fierce loyalty in return. Should anything turn sour, or if any associates adopt conflicting ideals, then the fallout is one of a scorched earth policy. Angelo’s five brothers are more than willing to back him up, eager to fulfill any messages that have to be sent.

Angelo just wants the best for him and his family first, and this gives him a hunger and ambition that’s hard to match. Now he’s got eyes on the wider Chicago area to claim his domain, and the whole family is behind him. 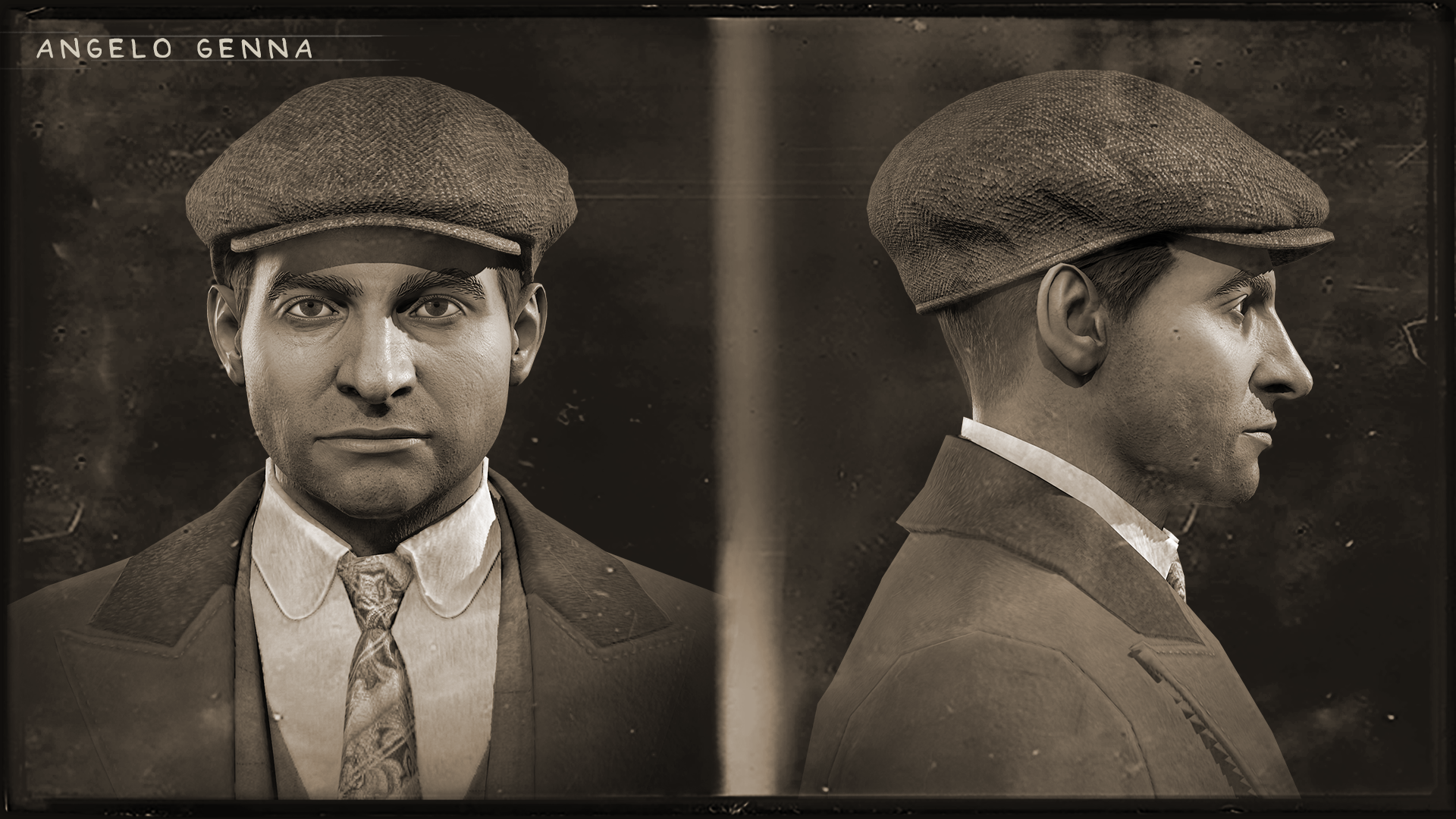 The following is a verbatim telephone conversation garnered by way of a wiretap between Angelo Genna and Alphonse Capone. The wire tap was planted on Genna’s private wire at his residence in Little Italy and the telephone call is inbound from Capone, from a location unknown to police.

Operator: Good evening. A call from a Mr. Halsted in the South Side district, do you accept?

Genna: [Low voice, away from telephone receiver] Who the fuck?…[into receiver] Yeah. [Clears throat] Yeah, put him through.

Capone: [In a feigned accent] Mr. Genna? You made me very angry.

Genna: Two things Halsted: Who the fuck are ya? And why should I care?

Capone: Your liquor made me blind. I wanna be compensated.

Genna: It made ya dumb at least. Ya got any idea who you’re talkin’ to?

Capone: Pay me or I go to the feds.

Genna: [Laughs] Who gave ya this number?

Capone: I ain’t afraid to be a rat. Fifty thousand or I tell the whole of Chicago that the piss you call liquor is poison.

Genna: [Low voice away from receiver] I ain’t got time for this. [Sighs, then into the receiver] Alright here’s what’s gonna happen, Halsted. You’re gonna hang up. Then you got about thirty minutes to crawl back into whatever [raising voice] fucking sewer ya came out of, before me and my brothers find ya.

Laughing on the line.

Genna: [Shouting] Ya hear me? When we find ya, you’re gonna be thankful you’re blind so ya can’t see what we do to ya!

Genna: Al? [sighs] Oh for chrissakes. The fuck is the matter with you?

Genna: …This how ya spend your time, Al? I’m busy over here.

Genna: You gotta be funny for that to happen.

Genna: Is that so?

Capone: Yeah…and he got to know some of the locals in my place earlier.

Genna: Shit. How many guys?

Capone: Too many to call it a fair fight.

Genna: Goddammit Gabriel. Is he hurt?

Capone: You kiddin’ me?

Capone: Look, those guys probably had it comin’. But he had ’em uh…repainting the walls. Not to mention some collateral damage.

Genna: How much damage?

Capone: Nothin’ I can’t replace with a little loose change. But I’m tryin’ to run a classy joint here… Ya understand?

Genna: So what, you and I gonna have a problem now?

Capone: I ain’t sayin’ that… not this time at least-

Genna: What are ya sayin’?

Capone: [Coughs] C’mon Angelo, you’re a smart guy. Smart enough to know that if he keeps going like this, it’ll start to smell like trouble… for
everybody.

Capone: Maybe just put a leash on him, alright?

Genna: I’ll put a leash on him, when someone puts a muzzle on you, eh?

Capone: [Laughs] Alright, that’s my one warning. It’s more than everyone else gets, ’cause I respect you.

Genna: Alright…well ya made your little telephone call. I’ll take it from here.

Genna: Hey, where are you callin’ from?

Genna: I can hear something…

Genna: I don’t know, like uh…a clicking or somethin’. Interference. You can’t hear that?

Soft static and breathing noise on the line.

Capone: Do y’self a favor Angelo, take some time off. You’re going nuts.

Genna: What and leave the whole city open for you? Get the fuck outta here.