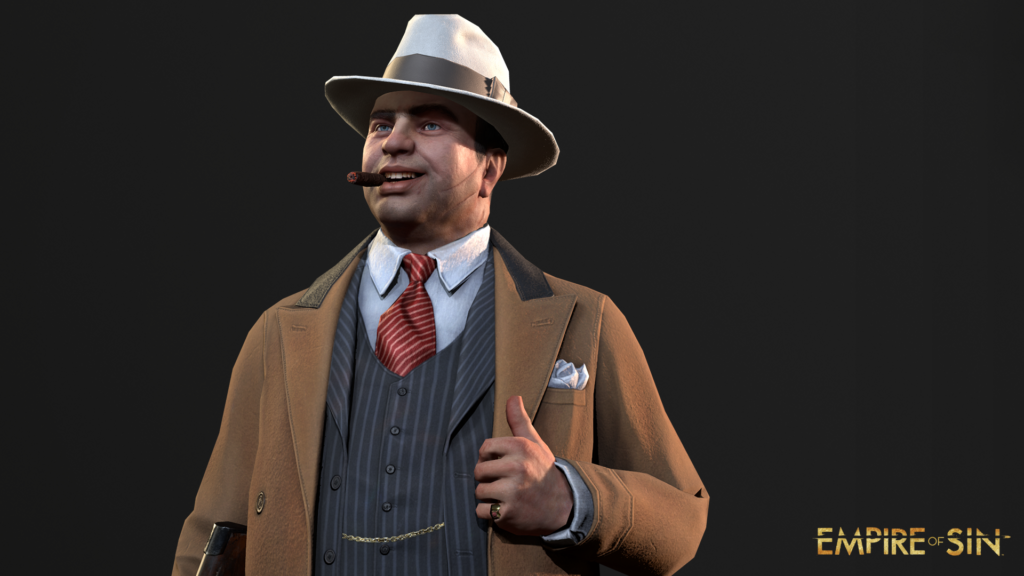 Public enemy number one. Leader of the Chicago Outfit by age twenty six. Earning up to a hundred million dollars a year throughout the twenties. Untouchable to everyone but the IRS. Al “Scarface” Capone started in the street gangs of New York before becoming the gangster every other gangster wishes they were. His short reign at the top of Chicago’s underworld was enough to cement him in the annals of history as one of the most notorious and cold-blooded mobsters in memory and the blueprint for any wannabe gangster trying to rise through the ranks.

Since being recruited from Brooklyn by the Outfit, Capone has stamped his boot print all over the faces and places of the South Side of Chicago. Capone is the lethal combination of businessman and rottweiler; he can see the best ways to make money and knows when to delegate to his partner, Mr. Tommy Gun, and get his voice heard down Michigan Avenue.

For Capone, violence is just another part of the job. It’s a necessary trade off in the interests of furthering business prospects and status in the city. That gives him a callous edge and a heavy hand when it comes to sending a message to any chancers to his throne. In his eyes, it’s kill or be killed, and with a wife and child to stay alive for, he always makes sure he’s the man of action and not reaction.
While never convicted, Capone has direct ties to many bloody slayings throughout the city. Cold blooded is a part of his nature, and though some may see him as a ruthless killer, as far as he and his associates are concerned, you don’t get to make Chicago your kingdom without spending some lead.

Detective S. Kennedy of the Chicago Police Department is working closely with the Bureau of Prohibition to build a case against Al Capone, a man they believe to be a growing threat to the sanctity of prohibition law. Below are the notes taken by Det. Kennedy on one of his stakeouts… 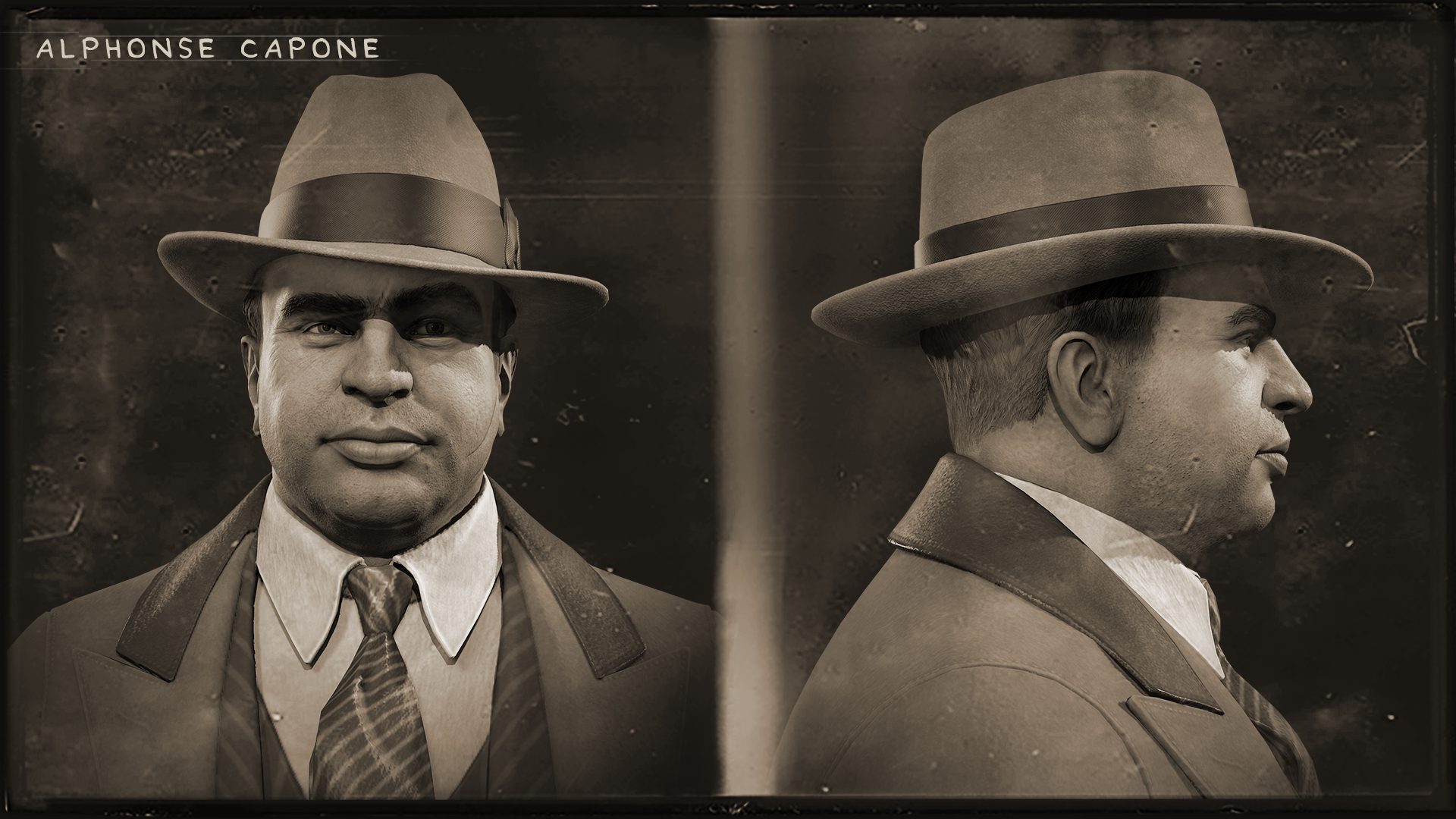 The following are handwritten notes recorded by Det. S. Kennedy with attending officer J.L. Murphy, during a stakeout and undercover pursuit of Alphonse Capone. The notes are being used as evidence to the ongoing case being built against Mr. Capone.

12:00, South Prairie Ave. 60619 – Stationed south of the entrance to the home of ‘Scarface’ Capone. Street is quiet, save for some night-time traffic; seems a pretty residential place for a gangster to live. Looks like he’s got two guards walking a beat around his house for the night, both armed with guns the size of cannons.

12:30 – Ordered Murphy to walk the block; maybe get eyes on the rear entrance — if he can get a view — to spot anything suspicious that arises.

12:50 – One of the goons has come out to the street. He’s standing on the sidewalk looking North and South alternately.

12:58 – Taxi approached from the North and pulled up directly in front of the property. The guard opened the cab door for two ladies and a man — small stature and robust, in a gray hat and trenchcoat. The females: both average height, dark hair, mid-twenties. One in a light coloured overcoat, the other in a fur shawl. Clearly intoxicated. The man is now engaging in friendly conversation with the guard. Cannot tell who it is as he is facing away from view. All three enter the house; the guard resumes his beat around the house.

01:30 – Murphy returns to the automobile. Nothing to report, other than there’s another guard at the back.

04:00 – Taxi pulls up to the house once again. The same guard as before, ushers the three visitors out the front door. The man can now be identified as one Tony Lombardo, known associate of the Capone Outfit. He talks to the guard a minute on the sidewalk, then enters the taxi and the three drive away.

06:30 – The street is slowly starting to wake up now; mail truck, street traffic etc., I sent Murphy on the beat again to survey the back door — from a distance.

07:00 – Murphy has returned. The rear of the house now has two of Capone’s goons stationed directly outside at the back door. Capone must be getting ready to mobilize.

07:05 – A green Rolls-Royce has turned the north east corner of South Prairie Avenue., headed south. Two occupants — a driver and passenger. We are now engaging in a distant pursuit in our motor car.

07:15, Off South Prairie Ave. – Rolls-Royce has stopped at the rear of the building. The passenger has disembarked. There’s a rifle in the fold of his overcoat. Description: Tall, dark hair, clean shaven, early thirties. He’s standing in the street now, looking around…
He’s signalled to the rear of the building and Capone can now be seen approaching the vehicle, flanked by the two guards. I can now identify them as Frank Nitti and Tony Accardo. They have entered the automobile and we are once again pursuing from a distance.

08:00, Fuller Park – Stationed outside a premises near W 42nd St., Capone and Nitti have entered the building through the front. Their car remains idling outside where Accardo set himself on the sidewalk between the auto and the front door to keep watch. He appears to be having a conversation through the window with the unidentified passenger of the motor car.

08:10 – Capone and Nitti exit the building quickly. Both appear restless and Capone puts a package into the inside pocket of his suit jacket and shouts something to Accardo before entering the motor that makes Accardo laugh. Once again, we’re in pursuit.

09:00, Bridge Port – Same as before, Capone and Nitti enter a building at 134 S Halsted St., Accardo keeps watch outside. This is a faster visit and they both emerge within a couple of minutes — Suspected pick-ups of racket cash or protection money.

10:45 – Two more stops in Armor Square and Douglas – Premises are at 130 W Alexander St. and 78 S Slate St., respectively. Capone exited the S Slate Street premises wiping his hands on a handkerchief that appears to be bloodstained — Must have gotten pretty heated in there.

11:30, Michigan Ave. – Stationed north of an entrance to a restaurant named ‘The Olive Branch’. Capone, Nitti and Accardo have gone inside, after the owner — presumably — met them at the door with open arms and back slaps. Must be breakfast. The driver stayed in the car with the unidentified passenger loitering outside the restaurant, doing his best to look inconspicuous.

12:30 – The party emerges. The owner once again escorts them to the door. Capone is speaking to the owner and prodding his chest with a pointed finger. The owner’s a big guy, but damn, he looks like a scolded child. Capone slaps him twice on the cheek and follows his crew to the motor. The owner shouts after them: “Thank you Mr. Capone. You won’t regret this.”
— Regret what exactly?
Note: send Murphy back with another beat cop to scope this place out at a later date.

13:30, Kenwood – Have been in pursuit for the last hour. No stops made, and there doesn’t seem to be any direction in particular that they are going. Either they’re conducting some sort of mobile business meeting, or they smell something’s off. Murphy and I are now hanging back a couple of extra yards so as not to spook them.

14:10, Hyde Park – Their motor car has now pulled into what seems to be a garage on 35 E 52nd Street. We’re stationed south of the entrance without a clear view of what’s going on inside, and I’m not getting too close to blow cover.

14:30 – Something’s up, I can feel it. Just had a cargo truck swing by real slow past our motor, then turn into the same garage. Two guards are outside to direct it in. This could be some sort of hooch deal?

14:35 – The motor car and truck have both left the garage, headed North. We are in pursuit. Unclear if the occupants of the motor car are the same as before, and I cannot identify the driver of the truck.

15:15, Outskirts of Woodlawn – No longer in pursuit. Followed motor and truck to the south end of Washington park. An arm came out of the motor in a beckoning motion and the truck accelerated and overtook it. The motor stopped in the middle of the road and the four occupants stepped out of the vehicle. All faces were covered with bandit scarves and they pointed tommy guns directly at our motor as we approached. They said nothing, just stood there aiming. I swear one was Capone. I could see him grinning under that mask, but of course I can’t prove it was him — beyond those jazzy fuckin’ shoes he wears. We sat at their mercy and after a minute they returned to their motor and took off heading west. What could I do? Take on all four with a fucking pistol? I can’t believe the nerve of these guys. Standing in the street in the middle of the day with automatic weapons.

15:30 – Returning to base. Who knows where that truck went to get the deal done? We now have known addresses for Capone-associated rackets on record at least. They can be added to the ongoing investigation.