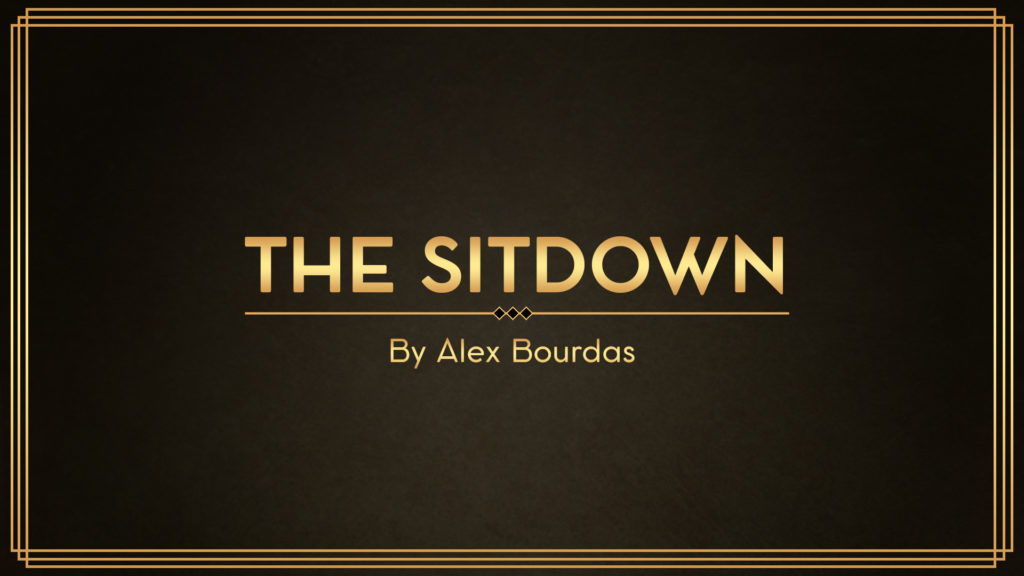 Aidan nervously tapped his fingers on his thigh. He was hired muscle, and his boss had taken him to a sit-down with another boss. Aidan hated sit-downs.

They were in in the cellar of a brothel, surrounded by whiskey barrels. It was dark, lit only by a few flickering lightbulbs, and various hired gunmen lurked in its shadowy corners. In the centre of the room, the only place with any real light to speak of, was Aidan’s boss, Angelo Rossi, and the woman he’d come here to meet, Mabel Ryley.

Mabel had been all charm up until now, up until the moment that she wasn’t. Angelo had been pushing his luck, trying to start a fight.

Mabel coolly breathed in on her cigarette, and idly brushed a bit of fallen ash off her fir lined blue coat. Angelo in contrast wore a charcoal pinstripe suit and a tan panama hat, like he was trying, and failing, to imitate Al Capone.

“I’ve offered you a fair deal, something that would be in both our interests.” Mabel explained.

“That deal aint fair! What you’re offering me for my booze just aint enough.” Angelo retorted.

“I’m offering you more than enough for your moonshine. If you don’t like what I’m willing to pay, you can always find another buyer.”

“Oh yeah? Maybe we will? Looks like there’s a whole lot of potential buyers all around this joint.”

Aidan’s hand started drifting towards the revolver he kept inside his jacket.

“This is Alley Cat territory, Mr. Rossi. My territory.”

“It don’t have to stay that way.” Aidan could only see Angelo’s back, but he could imagine the smug grin on his boss’ face. What was wrong with him, Aidan wondered? How did he come to be working for that madman? Aidan wished he was working for Mabel instead, solid and dependable and Irish like him. Sure, if the rumours were true, maybe she had murdered her husband, but sometimes that’s business, Aidan thought.

Angelo on the other hand was liable to explode at any minute, like a wind-up toy. It was like something else controlled him at times and made him do stupid things. Aidan hoped that Angelo wasn’t about to do a stupid thing.

“You’d best not be threatening me, Mr. Rossi, not on my own turf. But there really is no need for this to get heated.”

“Listen, Mabel, sweetheart, it’s not a threat. I’m just saying you’d all be better off working for me. What with your husband blown up and all, I think you’d do better with another man to call the shots. I very generously agree to the terms you suggested for the booze, you keep running your turf, but in return for that generosity, you answer to me. I may be new to Chicago, but I mean to make this city mine. What do you say to being the first to join my side?”

“Mr. Rossi, you clearly haven’t been in Chicago long if you think you can offer me this bull and think I’ll listen to it. You’d best get out of here now. Oh, and don’t ever call me sweetheart.”

“What’s the matter tuts? The stress of leading a gang getting to you? I always said that women…”

That was the moment the first shot rang out. Angelo stumbled away from the table, half falling and half scrambling for cover, his hand pressed up against his now bloody shoulder.

Aidan leapt out of his chair and dashed behind a stone pillar. Barely had he gotten behind it that the rattle of a tommy gun echo through the room. Another one of Angelo’s hired goons, a man named Enrique took several rounds to the chest and dropped like a stone.

For a second Aidan wondered where Enrique was from. It might have been Mexico, or Cuba, or maybe somewhere else. Just for a second, he regretted that he hadn’t asked. But only for a second. Angelo always seemed to end up with a diverse cast of gunmen around him; there would be more Enriques for him to barely get to know before they died.

Up ahead, Angelo was cowering behind a barrel of whiskey, and Aidan knew he needed to get to him. If the boss got killed, there wouldn’t be a payday.

The fire of the tommy gun stopped for just long enough for Aidan to dart out from behind his pillar and shoot at the goon holding it. He fired two shots, but he didn’t pause for long enough to see if the man was dead or not. Instead, he dashed towards Angelo, and fell in next to him.

“Course I am. I’m always alright. Aint this fun!” Aidan sighed as Angelo popped out of cover to fire off a few shots from his pistol, almost firing blind.

In the corner of Aidan’s vision, a lightbulb exploded in a hail of sparks and glass as a stray bullet hit it. It almost distracted Aidan long enough for one of Mabel’s thugs to sweep around from the side and flank them, but Aidan turned around just in time to see a man with a shotgun approaching, trying to get around the other side of the whiskey barrels. Aidan wheeled around and he squeezed the trigger, killing the man with the shotgun.

Bullets whizzed over their heads, but Angelo still refused, instead laughing maniacally as he fired off a few more shots. Why did Aiden ever agree to work for this lunatic? Why couldn’t he have worked for Mabel? Or someone else, literally anyone else?

He looked around the room; Angelo still had two hired guns left alive, Tommy and Vernon, he thought their names were. They were further back, each crouched between different pieces of furniture and laying down ineffective supressing fire, just like their boss. With a reluctant sigh, he indicated to them to cover him.

“Right boss, I’m gonna try flanking them, just like they tried with us. Stay here, keep your head down.”

He slid around the corner of the whiskey barrel and felt the dampness on his back as whiskey streamed out of the barrel from bullet holes. What a waste, he thought. None of this needed to happen.

The intermittent noise of gunfire in that place was deafening, and the flash of gunfire lit up the dim cellar, but Aidan thought that he might be able to slip by to the next set of barrels in that confusion. He peaked his head out, and he saw that Mabel and her gunmen had hunkered down too, Mabel behind a flipped over table, now ridden with bullet holes, and her gunmen hidden behind barrels, pillars and any other miscellaneous bits of furniture that they could use as cover.

Mabel peaked out of cover and fired towards Angelo, but Aidan felt the whoosh of air as it raced past the back of his head. His heart stopped for a second. The bullet must have ricocheted off one of the pillars. He could have been a dead man.

He turned back to Angelo’s goons and nodded. There was a moment of silence, like a perfect calm, but it only lasted for a moment. Tommy and Vernon started firing, and Aidan took the opportunity to dart across to next set of barrels.

He didn’t think anyone had spotted him. He had made it this far, safe. He reached into his pocket and pulled out a set of brass knuckles. What he was going to do next was going to need to be up close and personal. He’d rush Mabel’s guards, close in before they had a chance to react. He breathed in deeply, trying to steady his nerves. He was ready to move. He was going to move in three…two…

It was then that Mabel called out.

“You never should have messed with me, Angelo! Now you’re going to be leaving here in a body bag! Take over Chicago, will you? Hah! No one’s even going to remember your name!”

“Hey! They’ll remember! My name is…” Angelo stood up, puffing up his chest. His gun was in hand, but he was no longer in cover. Mabel stayed behind cover, leaning out just enough to fire a single shot.

Angelo slumped down, dead. Damn, Aiden thought, there goes my payday. At least he could try to get alive, if not paid.

“Hey, listen, Mabel, I’ve got no problem with you! My boss, he was a real piece of work! I was only here because he was paying me, and he aint paying me no more! No need for us to kill each other, right?”

“You should have thought about that before you shot at me!”

Aiden cursed himself for giving away his position for nothing.

“More covering fire, boys! Let’s get out of here!” He called out to Tommy and Vernon, and they were happy to oblige. They weren’t very good at actually hitting anything, but between the two of them, they sure knew how to pour out a lot of bullets in a short time.

Aiden scrambled, keeping himself as low to the floor as he could. All around bullets sang through the air, throwing up clouds of dust that made the cellar seem even more claustrophobic. He blindly fired behind him as he moved, and he felt that empty click as his gun ran out of bullets. But through the smoke and gunfire, he managed to reach the back of the room, where Tommy and Vernon waited. Behind them was a step of stairs, dingy and dark, leading up to a heavy wooden trapdoor, and a back alley beyond that.

He moved first, calling out for Tommy and Vernon to hurry after him. And they did. They moved with a speed he’d never seen in them before.

And they kept running, until they could pile into the car, and drive hurriedly away. Tommy drove, and he slammed his foot on the accelerator, tearing away so quickly Aiden even had to tell him to slow down. Or really, he snapped at him. He wanted to get away from Mabel’s, but he didn’t exactly want to get pulled over by the cops either.

They drove until they were halfway across the city, and it was only then that they stopped to really breathe and relax.

“Listen up,” Aiden began “what happened back there was a disaster. That Angelo was a piece of work, starting stupid fights just ‘cause he could. No one sane acts like that. Well enough of that, I say. We don’t need any bosses, alright? From now on, we’re our own crew, yes?”

Tommy and Vernon just looked at each other and shrugged. Aiden guessed that made him the boss now. Maybe it wasn’t such a bad day after all, he told himself.