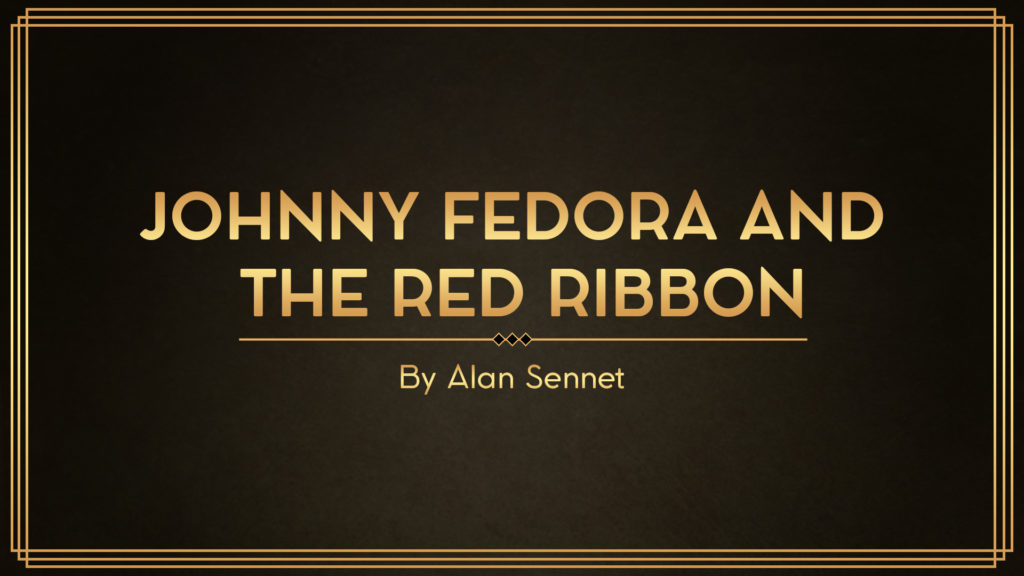 Johnny Fedora and the Red Ribbon

7:30pm in Chicago. A cherry red Ford Coupe laps a certain block, in a certain  neighbourhood, and everybody on the street who knows the car knows the driver.  If they know the driver they know why he is there.

I mutter to my partner Lucas, musing as I drive.

‘In an aquarium, it’s not about feeding anymore. It’s about territory.’ I pause for a moment.  ‘Chicago is just one big aquarium, full of big fish getting fatter.’ I start to pull in to park up.  ‘An aquarium that’s not big enough for all of them.’

I pull in and I step out of the car into the fresh air. I tighten the belt on my wool overcoat.  Long and as tight a tailored fit as I can handle. I complete the silhouette with my hat. Wool  Fedora, cherry red, with a wide brim. Distinctive. It sends the message it needs to. ‘I’m not  hiding.’

Lucas knows his role. He stays in the car with the violin case. I step up to the corner where a  florist’s shop sits nestled in. Quiet and empty. ‘Roselia’s Flowers’ in old brass signage on the  door. Beryl and Kate Roselia were Chicago natives. Their family had a flower shop in the city  since as long as anybody in this town can recall. When the dad died their mother ran off

with all the money she could carry in a hatbox and bolted the night of the funeral. Bills had  to be paid and they needed capital. Beryl liked sex; her sister Kate liked money. It didn’t take long before they figured out a new family business. From what I could tell, business was  good. Out front was still a flower shop though. A good front. Legitimate. Convenient. Meant  the cheating husbands could buy flowers for their wives on the way out. The aroma of  flowers was heady. I didn’t hate it. Soon as the bell on the door chimed, out she came.  Beryl hit me with her baby blue eyes full force when I came through the door. It’s a neat  trick. It stops most men in their tracks and puts lead in the pencil. Most guys see those eyes,  and maybe the briefest flash of a garter in her tight dress, and the only thing dropping faster  than their belt buckle to the floor is their wallet to the side table. It’s a neat trick. I’ve just  seen better.

‘Here on business, not pleasure B’ I told her, perhaps a little colder than I meant to.

‘In my line of work that gets blurry’ she said, abandoning her usual sales pitch voice for  something more conversational.

‘In my line of work that gets you killed.’ I replied, equally coldly, but finished with a smile so  it didn’t sound threatening. I like to be friendly when I can afford it. But friendly, not friends.  This was work.

staff door. She liked to lurk behind it with a weapon until she knew it was a paying  customer.

I got to the point.

Out of my pocket I pulled a long red ribbon and placed it on the counter.  ‘This yours B?’ I asked with as stoic a face as I could muster.

They looked it over.

‘Could be anyone’s…’ Kate chimed in without looking too close. She knew full well what was  on the counter.

‘Not many places I can think of in Chicago to find a red ribbon that smells of sweat and  flowers’ I enunciated that last word extra hard for effect.

‘I’m not the only one with a deductive mind. Mabel Ryley’s on the warpath. Someone threw  one of her enforcers through the door of a speakeasy naked as the day he was born.’  I pointed down at the ribbon.

‘Except for this ribbon on his neck. All tied in a neat little bow like a gift.’

‘You think we had something to do with it?’ she said dismissively.

‘Maggie Dyer’s boy did the throwing. Its her style. Theatrical. I think you did the stripping  and decorating. I’m thinking he was a customer of yours. Was he?’

Kate got in first ‘So what if he was a client.’

‘Because now he’s a message. Loud and clear and gift wrapped. This was an intimidation play and you got mixed up in it. Everybody knows this is my block. Small time, and gonna  stay that way. Nothing big enough to be worth taking so people leave this block alone.’ I  lingered for a moment on that last part. ‘Unless…they have a reason that isn’t money.’

Kate stared at me ‘Like bruised pride.’ She whispered.

‘You’re getting it.’ I said as impassively as I could.

‘It was easy money…’ she stammered.

‘He didn’t get hurt, just embarrassed is all…no harm done…’ She sounded like she was trying  to convince herself more than me.

‘We go unnoticed, we get by, but this was a chance at a real big break.’ Kate chipped in  suddenly. She was holding her sister’s hand tightly.

I was afraid of this happening eventually. A little fish can stay hidden, ignored, but get a lot  of little fish together and you get a giant shoal. But once a fish gets the attention of a big  predator they scatter or get swallowed up.

‘You know how I operate. I took care of it. But if you draw attention to this outfit again  getting greedy’ I picked up a rose from the counter display. ‘Then the whole bouquet goes  out of balance, and the pruning starts.’

Kate nodded. She had a head for business.

‘Good. Now have a nice night ladies.’ I tipped my hat in a practiced salute.  ‘Lets keep these flowers pretty ok.’

Lucas gave me a look from the car. I nodded and stepped into the drivers seat.  ‘We’re good. The heat’s contained.’ I sighed.

‘Good to hear’ Lucas tried to keep the worry out of his voice. Badly. This was why I did the  talking.

‘Home.’ I said revving the engine.

‘So what was it you were saying earlier about aquariums?’ Lucas said, with idle curiosity.  I threw my hat into the back and pulled the car into the road.

‘When I was younger, my dad brought me a bunch of cheap fish from a closing down pet  store for my birthday. But he could only afford a tiny little glass aquarium to keep them in. When he got laid off from his job and money got tighter, we stopped feeding them as much to save money. I remember there was one little reddish one. I figured he’d be the first to go  when things got tight.’

I spoke with a glint of old memories in my voice. Stopping at the intersection to wait my  turn.

‘Biggest ones staked their territory in the tank, corners, rocks, whatever. In the end four of  the biggest ones fought to the death, and ate each other. The little red one, they could get  him any time, they went for the ones they thought were threats. By the end, the biggest one left was getting almost all the food, till he got so bloated he got sick and died off too.’

I took my turn. Just a few streets left to home.

‘The little red one. Outlived every single one. That’s when I learned how you survive in an  aquarium.’