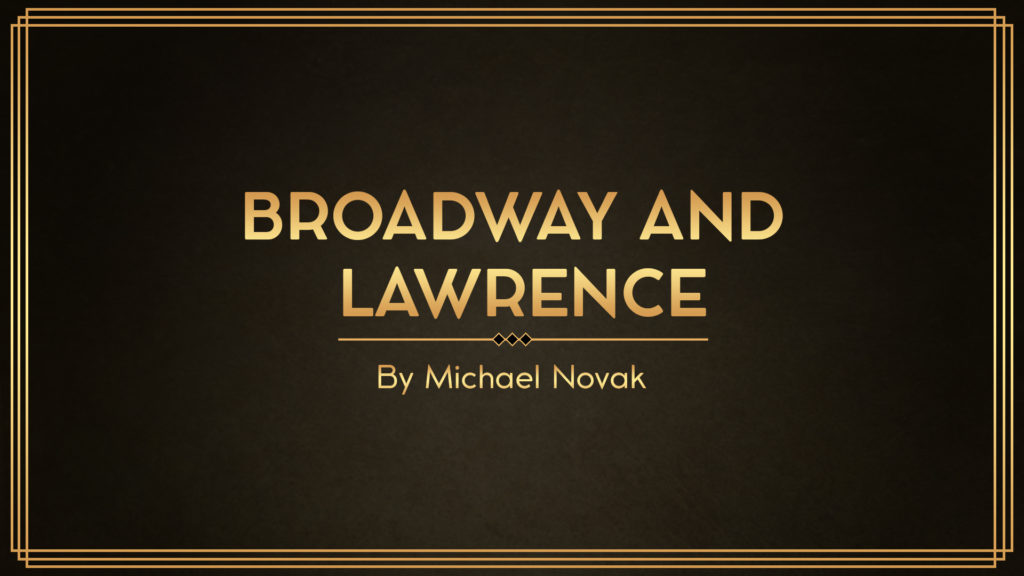 I stood on the corner of Broadway and Lawrence, out in the summer rain. I had no business being here, and I damn well knew it. Behind me was the Green Mill. That was a swanky joint, the kind of place where the cover charge is more than an honest man makes in a week. A cheap hood like me, well, I just didn’t fit. But I wasn’t here for the entertainment; this was strictly business.

Over there, about 30 odd feet from me, was a phone booth. The boss sent me here, told me to an important call was gonna’ come at exactly 10. When it came, I was supposed to pick up. Don’t talk, don’t ask who it is, just shut the hell up and write down exactly what the guy says, every single word, or I’m out on my ass faster than the 20th Century comes into LaSalle.

I thought about lighting up a smoke, but it was too wet. It was raining, but not the nice kind a’ rain that cools you off, no sir. It was too hot for that, the kind of night where you swear that the whole goddamn world is a giant sauna you can’t get out of. This stuff just came down, made big puddles that soaked through your shoes and made your clothes feel like a hundred pounds. The neon signs on the buildings flashed pink and blue and orange, and the rain and the puddles in the street looked bright and shiny because of it. Cars drove by fast, honking their horns and going every way anyone could go. I stood back from the road, trying not to get splashed by the tires. I wished I was in one of them, the cars. Didn’t matter which one or where it was going, anything to be dry and not here.

At any rate, I’d be gone soon. Off this corner, outta stinkin’ lousy Chicago that smells like dead cows and cheap hooch. I was qutin’ the business and goin’ away with Louise.

Ah, I forgot, you don’t know Louise. Louise was my girl. Well, she was my girl and about half the city’s girl too if you know what I mean, but she liked me especially, and I knew she meant it. It was quite a hot little affair, and that’s all I’ll say on the matter. As soon as the sun was up, we were clearing out and driving west until the gas ran out, and never coming back here again.

But that was tomorrow, which couldn’t get here soon enough if it was a rocket. Now I was just standing here in the rain, my shoes so wet I swear I felt them start to curl up at the tips. I checked my watch; one of those wrist-jobs. I know people say they’re for dames, but I got used to em’ during the War. One minute to ten.

I went inside the phone booth. At least now I was dry, although I could tell from the smell inside it that whoever used it before me was blotto and probably smoking a pack a day too. Then the phone rang. I almost jumped, weird since I knew it was coming, but like I said, this business tends to make a man nervous.

I picked up the phone and started listening. As I fumbled for a piece of paper and a pen, I heard a voice on the other end. It sounded familiar. Too familiar.

“Jack, hope you’re stayin’ dry.” It was my boss. I recognized him instantly from his voice. He was smoking one of those nasty cheap cigars that smelled like a burning tire, and he was chuckling the way he did before he had somebody offed.

Why the hell was he calling me? I wanted to hang up, and I probably should have, but for some stupid reason I didn’t.

“Now Jack, I know what’s up. I know you’ve been messin’ aroun’ with Louise. I thought I made it clear to all of you monkeys to keep your damn hands off the girls, especially the ones that I’ve got my hands on!”

Running away with my boss’ lady, especially a choice bit of Calico like Louise? Not one of my better ideas.

“I also know about the dough Jack. I might have quit school when I was ten, but I can still tell when some bastard takes ten grand outta’ the safe at once!”

That stuff was at home, in the steamer trunk under my bed. Louise and I were gonna live off of it until we could both go straight and get some legit work.

“Well, hehehe (there was that stupid little laugh again), I can handle you. I made you what you are, and I’m gonna unmake you ungrateful four-flushing bastard. Turn around, don’t hang up.”

I turned around to face the door, still on the phone. Starring me in the face from out in the deluge was Mad Dog Willie.

I didn’t like Mad Dog Willie, and neither did anyone else. His own wife wasn’t even too fond of him, which might be why he gave himself a divorce with a forty-five. His eyes were cold as Lake Michigan in December, his skin was stretched over his bones like a cheap rubber mask, and he was grinning like the Cheshire Cat if he’d just smoked all of the dope in China.

My boss kept yelling, but I wasn’t listening. I dropped the phone, let him scream at nothin’. I stepped outside into the rain, eyeball to eyeball with a lunatic.

That was the other reason no one liked him. Half the time we couldn’t even understand him.

“Look Mad Dog,” I said, “I got a century right here in my pocket. It’s yours if you just…”

“You are very, very shtupid. You sink you are ze clown, ja? Well I’ve known zum clowns, and you are not ze funny.”

Mad Dog opened his coat and pulled his forty-five, smooth so no one else but me saw it. I was about to take a shot from a cannon at spitting distance.

And he was calling me the clown? With that laugh?

I had no idea what to do. I could go for my heater, but he already had his out with the hammer cocked, no way. I could hit the deck, no, no time to run before he fires again. I could hope someone would help me. That was the most ridiculous idea of all. In Chicago not even God himself is stupid enough to help a sucker on the street who’s about to eat lead.

I heard a shot, but I didn’t feel anything. I was shocked, looked down, no holes in me, no blood. Maybe he missed? But if he did, why didn’t he fire again?

Then I looked at Mad Dog and saw why. His hand was still on his gun, but it looked unnatural, like nothing inside was holding it up anymore. His eyes blanked out and he fell over onto the street like a cut tree. In the back of his head was a smoking hole the size of a soup can. The blood ran down into the street, mixing with the rainbow rainwater as it ran into the gutter.

Then I looked up from this pretty little picture and saw Louise. She always looked beautiful, but she was even more beautiful holding a smoking revolver in one hand. There she was, standing there, brown eyes, slightly kinky blond hair peeking out from under her hat. Where she usually had a big smile was an annoyed scowl.

“Jack, how the HELL do you keeping getting into these situations?” She was annoyed. Time to turn on the charm.

“Why, because of you baby,” I said. I thought I was being smooth. I went to put my hand on her cheek. She slapped me across the face hard enough to make me wince. Clearly I wasn’t as smooth as I thought.

“Don’t give me none a’ that garbage. How am I supposed to become an honest woman when I just blew somebody away in the middle of the sidewalk?”

“Louise, you did a public service. No one, but no one, is gonna’ miss that circus freak.”

People may not have missed him, but apparently one of Chicago’s rare upright citizens had seen the whole thing go down. I heard cop sirens in the distance.

Louise heard them too. “Damn it!” She threw the gun down the street drain. “Let’s bounce Jack!”

I couldn’t have agreed more. We both took off running like Jim Thorpe. ‘Round the corner was my car. Everything was a blur. All there was was the rainbow rain and the sounds of Louise’s heels clicking on the sidewalk, my wet shoes slapping like duck feet.

We finally got to my car. I jumped in and started the engine, Louise came in right after. I pulled away quick, no headlights so I wouldn’t attract too much attention. All we had to do now was grab the money and get out of the city before the cops or my boss caught up with us. Simple, right?

Nothing in my life was ever simple.